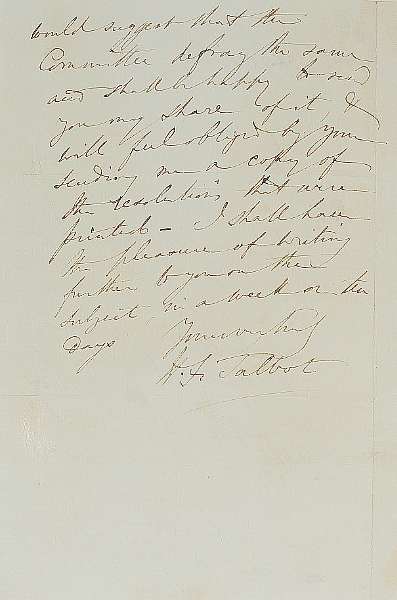 Autograph letter signed ("H.F. Talbot"), to R. Hunt, discussing the possible foundation of the Photographic Society ("...I am not without hopes that with the advice of my friends a method may be found of avoiding all these difficulties which have hitherto impeded the formation of the Ph.c Society..."), and offering to defray his share of the cost of printing the resolutions, two pages, 8vo, integral blank, printed identification slip, guard, Lacock Abbey, 3 May 1852

HENRY FOX TALBOT ON THE FOUNDATION OF THE ROYAL PHOTOGRAPHIC SOCIETY, and the concomitant possibility of allowing general use of his invention of photography. Robert Hunt, his correspondent, was a geologist and keen photographer who had written the first general treatise on photography on metal, paper and glass in 1841, and who was instrumental in founding what was to become the Royal Photographic Society in 1853 (the 'Royal´ being added in 1894). The "difficulties" to which Fox Talbot refers in his letter was his patent on the positive-negative process of 1839, which had greatly delayed the spread of his invention. Hunt managed to persuade him to allow his process to be freely used, for non-commercial purposes, by members of the proposed Society, thus at last removing the restrictions which had prevented its widespread adoption; a concession on Fox Talbot´s part which could be said to mark the coming of age of photography. The Photographic Society was to hold its inaugural meeting on 20 January 1853, with Sir Charles Eastlake PRA in the chair, Fox Talbot having declined the honour. The Society´s collection of photographs, formed between 1853 and 2001, has just been acquired for £4,500,000 by the National Museum of Photography, Film and Television, Bradford.

The Enys Collection of Autograph Manuscripts