Sir Anthony van Dyck 1599-1641 Portrait Of Sir Arthur Hopton (C. 1588-1650 Half length, wearing a black tunic with a white collar Oil on canvas, oval 59 by 47.5cm.; 2.25 by 18.75in This sensitive portrait dates from circa 1637-8, and can probably be dated to the time of the sitter's knight hood on 2nd February 1638 lt has been identified with some certainty by Malcolm Rogers as the portrait which formed part of the important collection of Sir Peter Lely which was dispersed in a sale in 1682 The identity of the sitter is confirmed by comparison with a picture of 1641 attributed to juan Ricci (Meadows Museum, Dallas). The head is also adapted for a three-quarter length portrait at Petworth. The sitter was the son of Sir Arthur Hopton, F-B of Witham, Somerset and his wife Rachel, daughter of Edmund Hall of Gretford. he was educated at Lincoln College Oxford. In October 1629 he accompanied Sir Francis Cottington to Spain where Cottington had been sent as ambassador, and remained there as agent after the conclusion of Cottington's mission. In April 1636 he returned to England where he remained for two years, before returning to Madrid. On 2nd February 1638 he was knighted and he subsequently succeeded Lord Aston as ambassador in Spain, where he remained throughout the civil war. he returned to England in 1649 and on 7th June was visited by Evelyn who referred to him as 'a most excellent person' and recorded some of his stories of Spain. Many of his dispatches from Spain are among the Clarendon papers at the. Bodleian Library and amongst the Tanner manuscripts are letters from Hopton about the Portuguese revolution in 1640 Hopton was a very significant figure in the growth of connoisseurship in England and his collected papers from 1631 to 1636 (Egerton Mss no. 1820 in the British Museum) are evidence of his importance as an agent both for Charles I and for numerous other major collectors (see articles by Elizabeth Trapier in Connoisseur, Vol 164, p.p. E39-49 and Vol 165 pp. 60-3). Charles I had been enthusiastic about Spanish and Italian art since his visit to Madrid in 1623 to woo the infanta Maria, and Hopton received numerous letters from England in respect of the wishes of the King and his courtiers. On 10th November 1631 Cottington wrote to Hopton - 'You must tell the Conde of Benavente from the King that the copie of the Venus of d-ie Pardo is now ready for him, with a picture of his Majestie if hee will give him his Saint Phillip for them. You must remember to send the Kind the painted grapes which the poore fellow has drawne for him.' The painter mentioned in the last sentence is probably Juan Fernandez, 'EI Labrador' the still life painter, many of whose paintings were sent to England by Hopton. Another of Hopton's patrons was Thomas Howard, 14th Earl of Arundel to whom Hopton sent paintings and drawings in 1631 and for whom he offered to acquire a book of drawings by Leonardo da Vinci. In 1633 Sir john Coke wrote to Hopton about Gentileschi's The Finding of Moses, which was to be presented to the King of Spain. In 1638 Hopton handled the exchange of Royal portraits between the English and Spanish courts. The Memoirs of money owing to van Dyck by Charles I includes 'More for the pictures which Sir Arthur Hopton hd in Spaine/75' and another note by van Dyck reads 'Le Roy La Reyne Le Prince Charles au ambassadeur Hopton - 90/75'. Provenance: Sir Peter Lely 1616-1680 , his sale 18th April 1682 ('Sir Arthur Hopkins in an oval ... 01.10 by 01.06in bt by Sir James Oxenden 2nd Bt. (c.1643-1708); Thence by descent to Sir Percy Duxwell-Oxenden, 10th Bt. and to his daughter Lady Capel Cure by whom sold Christie's, 20th November 1931, lot 94 (as of John Hampden), bt.L Ross; Central Pictures Galleries, New York, from whom bt. by the present owner Literature.. Malcolm Rogers, 'Two Portraits by van Dyck identified', The Burlington Magazine, Vol CXXIV, April 1982, pp. 235-6 To be included in the forthcoming Catalogue of the work of van Dyck by Sir Oliver Millar 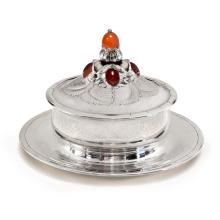 A Danish silver and hardstone butter dish and cover, No. 44, Georg Jensen Silversmithy, Copenhagen, circa 1930's 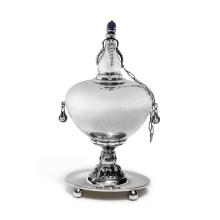 A Danish silver and hardstone cigar lighter, No. 73, Georg Jensen Silversmithy, Copenhagen, circa 1925-32 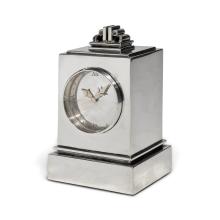 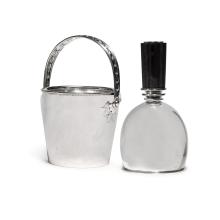 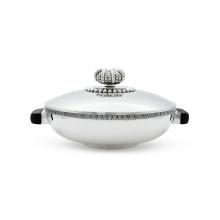 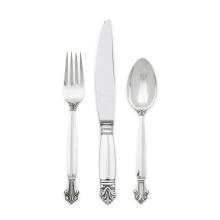