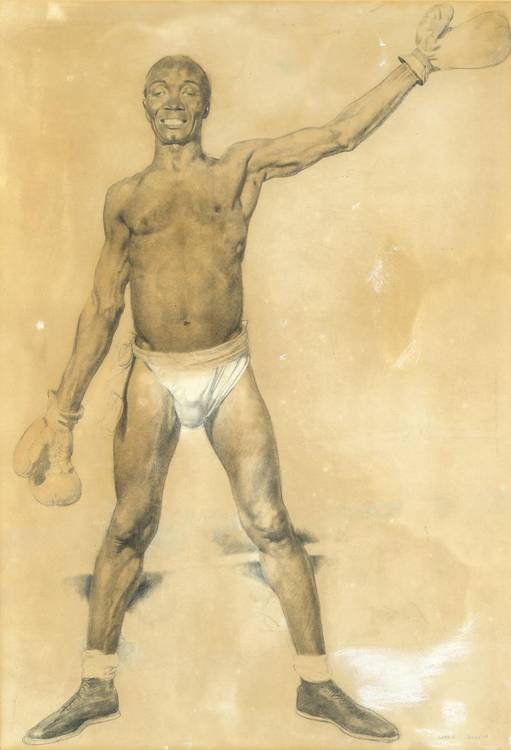 PROPERTY OF A GENTLEMAN

The Artist's Studio Book, 1924; The Winner purchased by John McCormack for £50 (McCormack made a Papal Count in 1928)
His son, Count Cyril McCormack, inherited from the above and thence by direct family descent to the present owner

In 1913 Orpen began work on a composition depicting the conclusion of a boxing contest, with the victor's hand held aloft by the referee whilst the limp body of the defeated boxer is seen being unceremoniously removed from the ring. Although the main work was never executed, two fine and highly finished pencil and watercolour studies that encompass both these aspects, have survived. One is the featured work, and the other, latterly known as The Boxer (coll. Allied Irish Bank, illustrated and discussed in Orpen and the Edwardian Era, Pyms Gallery, London, 1987, no.38, pp.104-5), centres on the defeated boxer. What is known of the original concept for the entire composition comes from a sketch within a letter written by Orpen in 1913, to the owner of the Goupil Gallery, William Marchant (Tate Archive). Orpen's original intention may well have been to show the completed composition at the New English Art Club Summer Exhibition the following year. However the project was overtaken by a solo exhibition of Orpen's work in New York. Both the boxing studies were included for possible sale but were returned in 1923, and The Winner was exhibited at the Summer Exhibition at the New English that year. The following year Orpen painted the portrait of the famous Irish tenor Count John McCormack. According to the oft-quoted anecdote "John McCormack saw the picture when he was sitting for his portrait, and offered Orpen five pounds for it. Orpen said: 'If you add a nought to it, you can have it'. McCormack did so, and took the picture home with him" (quoted in the 1978 Orpen Centenary exhibition catalogue, p.86).

In 1914 Chenil Galleries published a set of ten photogravure prints from pencil and watercolour drawings by Orpen. The Winner was one of them and received very favourable comments from contemporary critics. Quotes (from Chenil Galleries, op.cit.) on record include: "Perhaps the brutal but virile black boxer, The Winner, is what an artist would call the most "stunning" of them all" (Daily Graphic); "The best, for example, The Winner (is this "Dixie Kid"?)... [has] a style and largeness that bear[s] out Mr. Orpen's early promise" (Saturday Review); The Winner impresses one by the force with which the muscular strength and fitness of the negro champion are suggested" (Sunday Times). Such assessments are no less true today, and even more so when one gazes upon the original drawing.

Over the years various names have been suggested as to the identity of The Winner, including the great black champions of the time, the then reigning heavyweight champion Jack Johnson, or the welterweight Dixie Kid (Aaron Lister Brown). However neither was in Dublin in 1913. By far the most likely contender is Cyclone Billy Warren (c.1876/1877-1951). Certainly in the latter part of his life Warren became a familiar Dublin character, with his bowler hat, cane and faded crombie overcoat as he stood every day outside the GPO in O'Connell Street right up to the time of his death. Here he would tell of his boxing exploits to anyone prepared to listen. However Patrick Myler's recent research shows that these tales may have been much taller than his 6'1" stature.

Although highly likely, it cannot be said with absolute certainty that Warren met with Orpen in Dublin in 1913. Likewise, it cannot be said for certain whether Orpen had a specific fight in mind, or if it was just the general concept he was trying to achieve. Perhaps in addition to his own interest in boxing he took inspiration from William Nicholson's print of Boxing (November in the 1898 Almanac of Twelve Sports). In this print we are given a ringside view of a black boxer battling with his white opponent. In real terms, however, there do not appear to be any contests in 1913 that could have inspired Orpen, and it is unlikely he was representing the Cyclone's moment of glory in 1909 (he won the 'Irish Heavyweight Championship' by knockout), as all the sketches suggest an outdoor setting, more conducive to Reno or Las Vegas than The Empire, Belfast. If Orpen took a particular fight as inspiration, it was far more likely to have been the Heavyweight Championship of the World Contest, between the Champion, the black American, Jack Johnson 'The Galveston Giant' and the 'Great White Hope' challenger, the undefeated ex-World Champion, James J. Jeffries, on 4 July 1910, at Reno, Nevada. Alternatively, it may have been Orpen's intention to try to encapsulate "The Spirit of Boxing: The Victor and The Vanquished" in one canvas, in which case it must be regretted that the full composition was never completed. However, at least, in this sketch, a real sense of the pride and satisfaction of The Winner is revealed.

The Orpen Research Project, with thanks to Patrick Myler for additional information on Cyclone Billy Warren, 2004. Please note further information is available on request.

Irish Sale: Including Property from the Jefferson Smurfit Group