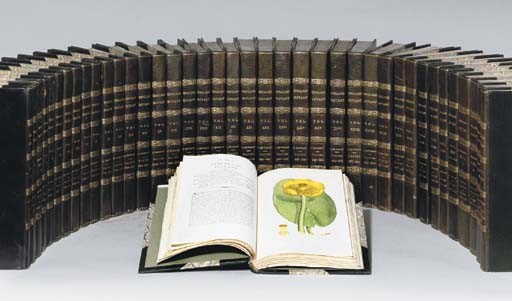 FIRST EDITIONS. A COMPLETE SET OF SOWERBY'S IMPORTANT BOTANICAL CONSPECTUS, which aimed to portray all indigenous British plants (except fungi), together with the four complete volumes of the Supplement. 'The prevailing taste for botanical pursuits, and the encouragement afforded in this country to every work which tends to advance them, have given rise to the present undertaking, and make any apology for it unnecessary... it seems extraordinary that among the many merely descriptive works on British Plants, no successful attempt has hitherto been made to illustrate them by original figures on a cheap and compendious plan' (English Botany, I, pp. [iii]-iv). The text of English Botany (apart from the descriptions of plates 16-18 by George Shaw) is by Sir James Smith and the plates by the Sowerbys; in this set, the title of vol. II is in the first state, with Sowerby's name alone and without the later watermark. The text of the Supplement was written by Hooker, William Borrer, Charles C. Babington, Miles J. Berkeley, William Wilson, and W.W. Newbould, and it was illustrated by the plates of J.D.C. Sowerby and Salter; it seems probable that the original owner of this set never purchased the fifth, unfinished volume of the Supplement, which was published in 1863-6, some 14 years after the fourth volume. Arnold Arboretum p. 661; BM(NH) V, p.1982; Brunet V, col. 415; Cleveland Collections 601; Dunthorne 291 (calling for 4 Supplement vols only); Henrey 1366-1368; Hunt 717; Nissen BBI 2225-2226; Pritzel 8789-8791; Stafleu and Cowan 12221. (40)