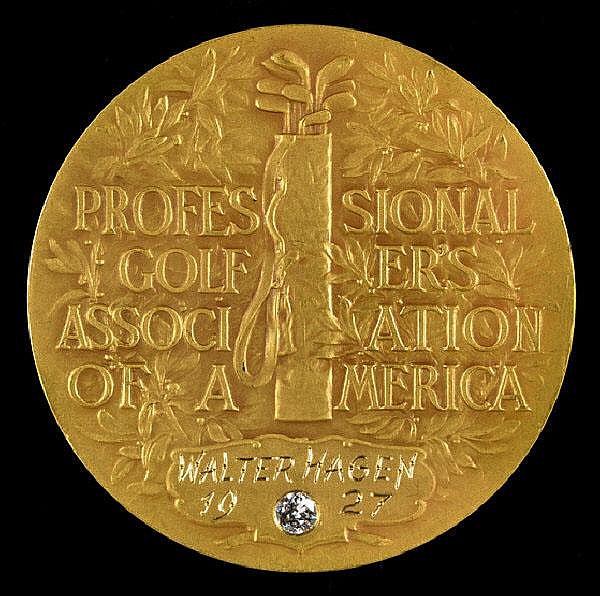 Sporting Memorabilia: Walter Hagen's gold and diamond-set winner's medal from the 1927 PGA Championship at the Cedar Crest Country Club, Dallas, Texas, designed by Henning Ryden, the reverse inscribed PROFESSIONAL GOLFER'S ASSOCIATION OF AMERICA, WALTER HAGEN, 1927, diameter 2.5cm., 2in., weight 167gr., 5oz. 7dwt.
Walter Hagen was the outstanding golfer of his era and won a total of 11 major championships, comprising the US Open in 1914 & 1919, the Open Championship in 1922, 1924, 1928 & 1929 and the US PGA Championship in 1921, 1924, 1925, 1926 and in 1927, for which the present medal was awarded.
Only Jack Nicklaus and Tiger Woods have surpassed Hagen's record in majors, although it should be noted that the 4th major - The Masters at Augusta - was not inaugurated until 1934 by which time 'The Haig' had been playing golf professionally for 22 years.
Walter was the first native born American to win the Open Championship, when he triumphed at Royal St. George's in 1922, as well as being the team captain of the first six US teams in Ryder Cup history. The PGA Championship, for which this medal was awarded in 1927, proved to be his most successful major. His record of five wins has been tied but never beaten. All in all, Walter Hagen recorded a career total of 45 PGA tournament victories and is a Member of the World Golf Hall of Fame.
Walter Charles Hagen was born at Rochester, N.Y., 21st December 1892, into a working class family. He developed his golfing skills through caddying at Rochester Country Club, gaining access to the course at off-peak times. By his mid-teens he was hired by the club's pro shop and was giving lessons to members. He made is professional golf debut in the Canadian Open of 1912, aged 19. Interestingly he was a fine baseball player as well and had turned down a trial for the Phillies in 1914 to play in a golf tournament, and was crowned US Open Champion for the first time a short while after.
Hagen was a key figure in the development of the professional golfer, helping raise their standings and their earnings too. Gene Sarazen once said "all [golf] professionals should say a little silent thanks to Walter Hagen every time they stretch a check between their fingers." As well as tournamant golf, Hagen played in many lucrative exhibition matches around the world wearing his trademark tailored clothes in bright colours and plush fabrics which went a great way to help popularise the game as a public spectacle. He also exploited the possibilities of product endorsement successfully and had a major role with Wilson including club design. Hagen is believed to have been the first sportsman to have earned $1 million dollars from his career.
The PGA Championship was a match play event until 1957. To win this medal in 1927 Hagen beat New Yorker and Ryder Cup team-mate Joe Turnesa. The match took its full course with Hagen winning 1 up.