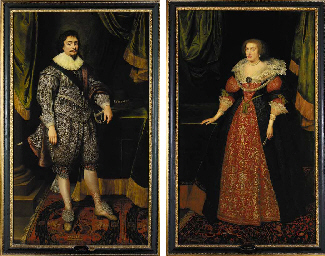 Portrait of King Frederick V of Bohemia, full-length, in a burgundy, embroidered slashed doublet and hose, his left hand resting on the hilt of his sword, beside a draped table with his hat, in an interior ; and Portrait of Elisabeth Stuart, Queen of Bohemia, full-length, in a red and black dress with a fan in her left hand, beside a draped table in an interior the former with date 'ANNO, 1628.' (lower left, on the base of the column); the latter with date 'Anno. Dom M.D.C.XXVIII,' (lower left, on the draped table) oil on canvas 84 x 493/4 in. (213.4 x 129 cm.) a pair (2) LITERATURE Historical and Descriptive Catalogue of Pictures Belonging to His Grace the Duke of Leeds, London, 1902, nos. 72 and 70, as 'Mytens', Hornby Castle, The Great Hall. EXHIBITION London, The Ministry of Works, on loan. NOTES Son of the Elector, Frederick IV, the sitter was born in Amberg. The son-in-law of King James I and the grandson of William, Prince of Orange, Frederick was Count Palatine of the Rhine, Duke of Bavaria, and Elector Palatine. In 1613 he married Princess Elisabeth, the only daughter of King James I, and six years later was offered the crown of Bohemia. In the wars which ensued Frederick was driven out and deposed as a consequence of his acceptance of the crown of Bohemia, after only one winter. This earned him the soubriquet 'The Winter King' and after ten years in exile he died at The Hague. In November 1630 Honthorst wrote a letter to the younger Dudley Carleton, a nephew of Viscount Dorchester, reporting that he had finished the portrait of the Winter King and was still working on the portrait of the Queen (see Judson and Ekkart, op. cit. ). Autograph versions of these new prototypes of the King and Queen, were sold from the collection of Sir Edward Every at Christie's, London on 9 February 1951, lot 107 (Judson and Ekkart, Gerrit van Honthorst 1592-1656, London, 1999, nos. 329 and 335, plates 214 and 215). The present portraits differ slightly from the prototypes in that they omit the crown and sceptres which are shown on the tables in the autograph versions.