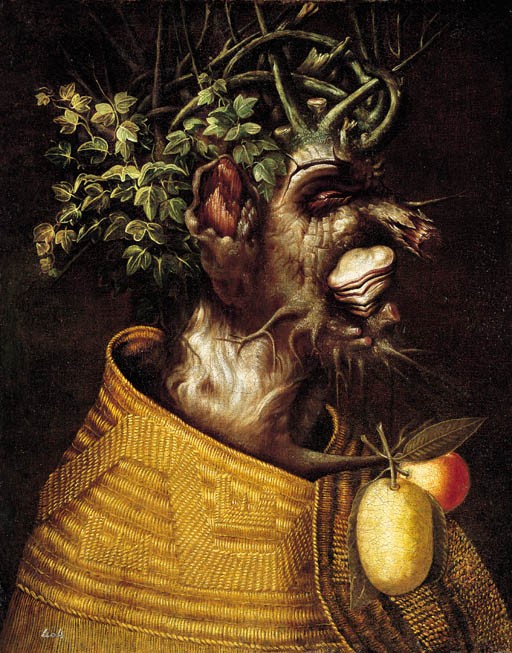 Giuseppe Arcimboldo came from a distinguished Milanese family, and received his initial artistic training from his father. His earliest work seems to have been for the Duomo of Milan, where he executed paintings and designed stained-glass windows as well as a baldacchino. He also designed tapestries and executed frescoes for the Duomos of Como and Monza, and was thus well-established as a Lombard artist when, in 1562, he was called to the Viennese court of Emperor Ferdinand I. There he entered imperial service as a portrait painter, and was named the Hof-Conterfetter of Maximilian II by 1564. Apart from two visits to Italy in 1566 and the 1570s, Arcimboldo remained at the imperial court in Vienna and Prague, where he was accorded noble status and rewarded with numerous special payments.

Despite his official position as the court portrait painter, no portraits can be convincingly attributed to him (with the exception of his own Self-portrait of circa 1570; untraced). His other duties at court included designing water works, entertainments and pageants, as well as making purchases for the imperial collections. His most famous invention, however, was a series of paintings of composite heads made up from diverse objects, for which he is still celebrated today. The first of these seem to be a set of the Four Seasons, painted for Maximilian II and dated 1563 (Spring, Real Academia de Bellas Artes de San Fernando, Madrid; Summer and Winter, Kunsthistorisches Museum, Vienna; Autumn, untraced). Arcimboldo also produced composite heads using the Elements for the Emperor, dated 1566, such as Water and Fire (both Kunsthistorisches Museum, Vienna). Rudolph II continued to commission these unusual and highly original heads, owning a series of the Four Seasons (as listed in the 1621 inventory of the Prague collection; see T. DaCosta Kaufmann, The School of Prague. Painting at the Court of Rudolf II, Chicago, 1988, pp. 164-5).

These witty and self-consciously playful images could also be read as allegories of imperial rule, frequently incorporating Habsburg symbols into the designs. They were extremely popular in courtly circles, and often replicas were made by Arcimboldo himself or his studio, as in the present picture, which is a version of Winter. This picture shows slight variations from the original 1563 commission, for example the letter M, standing for Emperor Maximilian, is absent from the cloak, as are the Habsburg fire iron devices. Another autograph version of Winter, from a series of the Four Seasons that Maximilian II ordered to be painted for Elector Augustus of Saxony (now in the Musée du Louvre, Paris), also differs from the 1563 picture, by depicting the crossed swords of Meissen instead of the Habsburg insignia. The curious crown-like impressa to be found in the present picture may be simplified renditions of the Habsburg motif, or possibly different, as yet unidentified, devices relating to an unknown recipient.