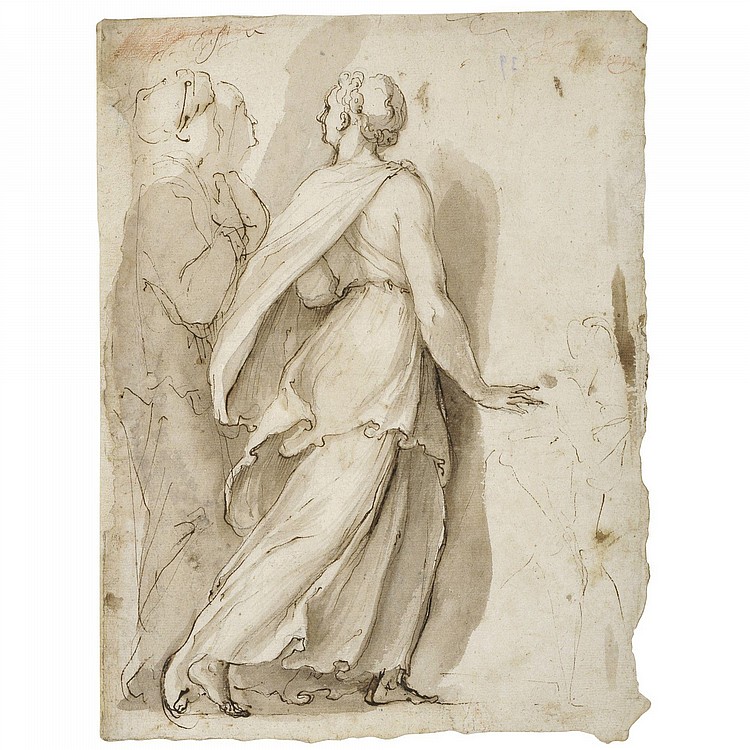 This study is after Polidoro's monochrome frescoes, depicting stories of the Sabines and the Romans, which he painted for Palazzo Ricci between 1524 and 1527. The important façade decoration, now lost, is known through copies. The three figures in the present sheet are part of the first section of the decoration, the procession of Sabines going to the Roman camp to attend their games. The composition is recorded in several copies, including one by Boscoli, now in the Fondazione Horne, Florence.υ1

According to Vasari, Taddeo came to Rome at the age of fourteen. His early development can be reconstructed mostly through surviving drawings as his painted work has been lost or destroyed. As Gere and Pouncey pointed out in their biography of Taddeo in their British Museum catalogue, when he arrived in Rome, circa 1543: 'The principal formative influences on him were the façade decorations of Polidoro da Caravaggio, all executed before 1527, and the late style of Perino del Vaga...'.υ2 The young Taddeo was mostly self-taught, training himself by copying earlier masters. He can be seen at work in the series of drawings of his early life made by his younger brother Federico, which are now in the Getty Museum. In one, Taddeo is shown sketching a façade decoration after being rebuffed by the painter Francesco Il Sant' Angelo.υ3

Characteristics of Taddeo's early style, all found in this drawing, are the light pen strokes, the influence of Perino del Vaga, and a certain roundness in the rendering of the figures. These can also all be seen in, for example, the fine double-sided sheet, recently acquired by the Musées de France from the De Beistegui Collection.υ4 Several studies after Polidoro's façade decorations have been attributed to Taddeo in the past. One, a Triumphal Procession of Roman Soldiers, in the Ambrosiana, Milan, bears an old inscription and attribution to Taddeo in the hand of Padre Sebastiano Resta: 'Taddeo Zuccaro figlio d'ottaviano nell'istoria di Furio Camillo à Mattei...' This confirms that previous scholars already recognised the drawings as the early work of Taddeo and correctly related them to Polidoro's frescoes, which in some cases were still visible.υ5