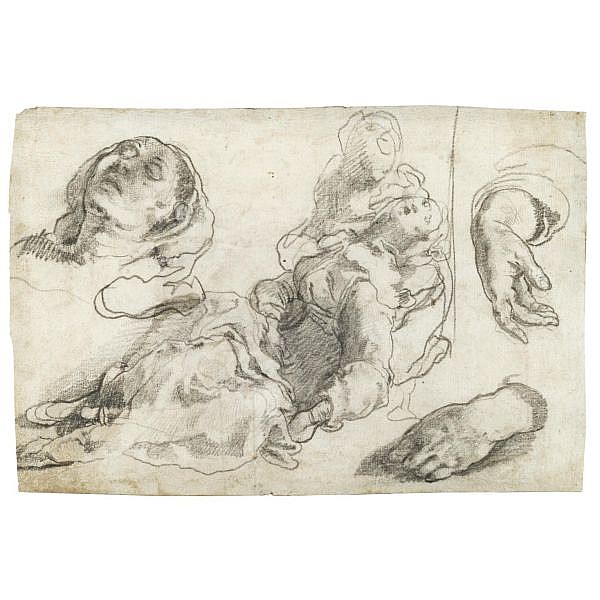 Taddeo Zuccaro , Sant' Angelo in Vado, Marches 1529 - 1566 Rome recto: the virgin fainting, supported by one of the holy women, with subsidiary studies of the virgin's head and hands; verso : drapery study of a standing figure, leaning over to the

Lot 24: Taddeo Zuccaro , Sant' Angelo in Vado, Marches 1529 - 1566 Rome recto: the virgin fainting, supported by one of the holy women, with subsidiary studies of the virgin's head and hands; verso : drapery study of a standing figure, leaning over to the

Poughkeepsie, Vassar College, Italian Drawings from the Collection of Mrs. Richard Krautheimer, 1963, no. 5

The recto of this sheet is preparatory for the figure of the Madonna in the Crucified Christ with the Virgin and the Holy Women, situated above the altar in the Mattei Chapel, in the Roman Church of Santa Maria della Consolazione (fig 1). A drapery study of a standing figure on the verso instead appears to be connected to a female figure in the background of the Washing of the Feet, a different scene from the same cycle.υ1 Taddeo's work in the Mattei Chapel marks a turning point from the first fifty years of the sixteenth century. The important commission was entrusted to the artist by the wealthy Roman patron Jacopo Mattei in 1553. Completed only in 1556, the fresco cycle depicts scenes from the Passion of Christ, culminating in the Crucifixion, to which the recto of the present drawing is related. The large number of preparatory studies that have survived bear witness to Taddeo's evolving ideas for the cycle, his talent for composition and his powerful skills as a draughtsman.υ2 John Gere was the first scholar to point out the stylistic similarities between the present sheet and two further drawings connected with the same project: one in the Szépmûvészeti Múseum, Budapest, also executed in black chalk and showing two soldiers from a resurrection, the other a double-sided sheet with studies of a Sibyl and other figures, formerly in the Rosenbach Foundation, and now at the J. Paul Getty Museum, Los Angeles.υ3 More than any other artist of his generation, Taddeo was innovative and inventive, and his enormous talent for creating large, complex and imposing compositions -- works as impressive as the great cycles of previous generations -- had a profound influence on the artists who came after him, a number of whom also attempted to to imitate his draughtsmanship. The inscription on the verso appears to be in the hand of Taddeo's brother Federico Zuccaro, and is comparable to inscriptions identified by John Gere on other sheets, such as one by Taddeo's master Pompeo Morganti da Fano,υ4 and a drawing by Cesare Nebbia, now in the British Museum.υ5 1. See J.A. Gere, op.cit., 1969, fig. 70 2. Gere, op.cit., 1969, p. 67 3. Reproduced Gere, op. cit., 1969, figs. 48 and 46, respectively; the latter drawing sold, New York, Sotheby's, 11 January 1990, lot 21 4. Sold, New York, Sotheby's 13 January 1988, lot 76 5. J. A. Gere and P. Pouncey, Artists working in Rome, c.1550 to c.1640, London 1983, vol. I, no. 223, vol. II, pl. 211