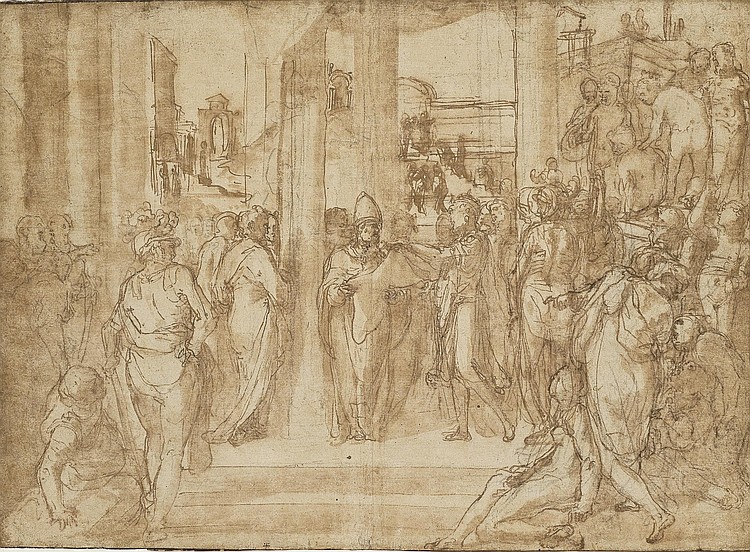 No VAT will be charged on the hammer price, but VAT at 17.5% will be added to the buyer's premium, which is invoiced on a VAT inclusive basis.
Please note Payments and Collections will be unavailable on Monday 12th July 2010 due to a major update to the Client Accounting IT system. For further details please call +44 (0) 20 7839 9060 or e-mail [email protected]
Datable to the 1560s, this sheet is stylistically characteristic of Taddeo Zuccaro's late drawings. It was evidently executed at the time that he and his younger brother Federico were engaged on three of the most significant commissions of Taddeo's career: the frescoes in the Sala Regia at the Vatican (1560-1566), the Sala dei Fatti Farnese at Caprarola (circa 1561-1566) and the Sala dei Fasti Farnese in the Palazzo Farnese, Rome (1564-1566).

The subject remains unidentified. Two figures, one a bishop or pope, the other a prince, exchange or discuss an object which may be a charter, a map or even a piece of cloth. In composition this central group is similar to other late designs by Taddeo, such as the small sketch at the upper right of his sheet of Studies for The Blinding of Elymas, Sacrifice at Lystra, and a Holy Family in the Art Institute of Chicago (inv. 1928.196; J. Brooks, Taddeo and Federico Zuccaro: Artist-Brothers in Renaissance Rome, exhib. cat., Los Angeles, The J. Paul Getty Museum, 2007, no. 50, recto). It also recalls Taddeo's Cardinal Albornoz gives the Farnese the Keys to Valentano, executed in circa 1565 (Los Angeles, J. Paul Getty Museum, inv. 87.GG.52; Renaissance into Baroque: Italian Master Drawings by the Zuccari, 1590-1600, exhib. cat., New York, National Academy of Design, 1990, no. 36). In that drawing, however, the member of the Farnese family who accepts the keys is represented wearing a plumed helmet; the coronet worn by the nobleman in the present drawing suggests that he is a king or emperor. Although one persuasive identification of the subject might be The Donation of Constantine, it is also possible that the drawing records an early, superseded compositional idea for the Sala Regia, representing The Donation of Ravenna by Charlemagne. The subject finally chosen was The Confirmation of the Donation, which in composition is quite different. Yet one study for The Confirmation of the Donation, in the British Museum (Gere 1969, no. 104), shows the scene framed by two standing figures in much the same manner as the present composition; the figure seen from behind on the left of the British Museum sheet is replicated at the left of the present drawing.

We are very grateful to Professor Clare Robertson for her assistance in preparing this catalogue note.