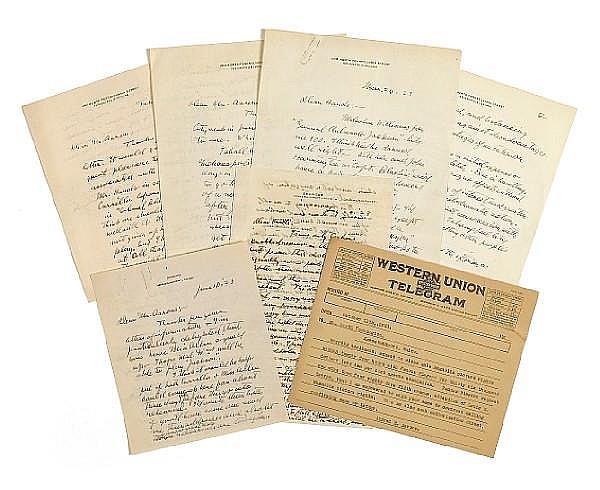 A playwright's odyssey from anticipation of the opening night to horror as the play is "forced out of New York." Set in the ante-bellum South, Magnolia charted the progress of Tom Rumford from bookish, God-fearing youth to hard-drinking, hard-fighting, hard-gambling monster. The correspondence opens with Tarkington applauding Aarons and Hands' suggestion of Leo Carrillo for the lead, and continues with his opinions on each casting choice. When asked his preference for an interior or exterior set, the playwright launches into an extraordinary five-page monologue touching on such minutiae as the positioning of grass mats and the darkness of foliage ("suggestive of palm leaves low down somewhere")—while admitting that "I am apt to think my own conceived picture of a scene the best—but recognize this as a possible weakness." There is then a hiatus, during which Magnolia opened at the Liberty Theatre on August 27, 1923. We next hear from Tarkington two days later, nit-picking ("The butterfly wasn't good—looked like a maple leaf," "did you fill the gap between the curtains in Act II?") and lamenting the reviews ("The damage may be fatal") which were in fact generally positive; he concedes, nonetheless, that "the audience was really with us." Turn-out, however, was lackluster, and although Magnolia blossomed in the third week, it was too late: Broadway magnate A.L. Erlanger had already scheduled another production for the Liberty, to begin October 1st. With no home on Broadway, Magnolia was forced onto the road after a mere forty performances. A ten-page letter dated September 20th sees Tarkington furiously blaming the booking office; admitting that "we began weakly" but convinced that word-of-mouth was saving the play, he is baffled that "we are exiled, not by the outsiders—the attacking critics—but by fellow workmen on our side of the theatre: I had made up my mind that if the theatrical critics stopped Magnolia I would write "movies" instead of plays; and if a blunder on our side of the fence has stopped it I think my decision twice as good." Ironically, the final item of correspondence is a telegram from Aarons to Tarkington stating that he has sold the motion picture rights to Magnolia for $36,000.