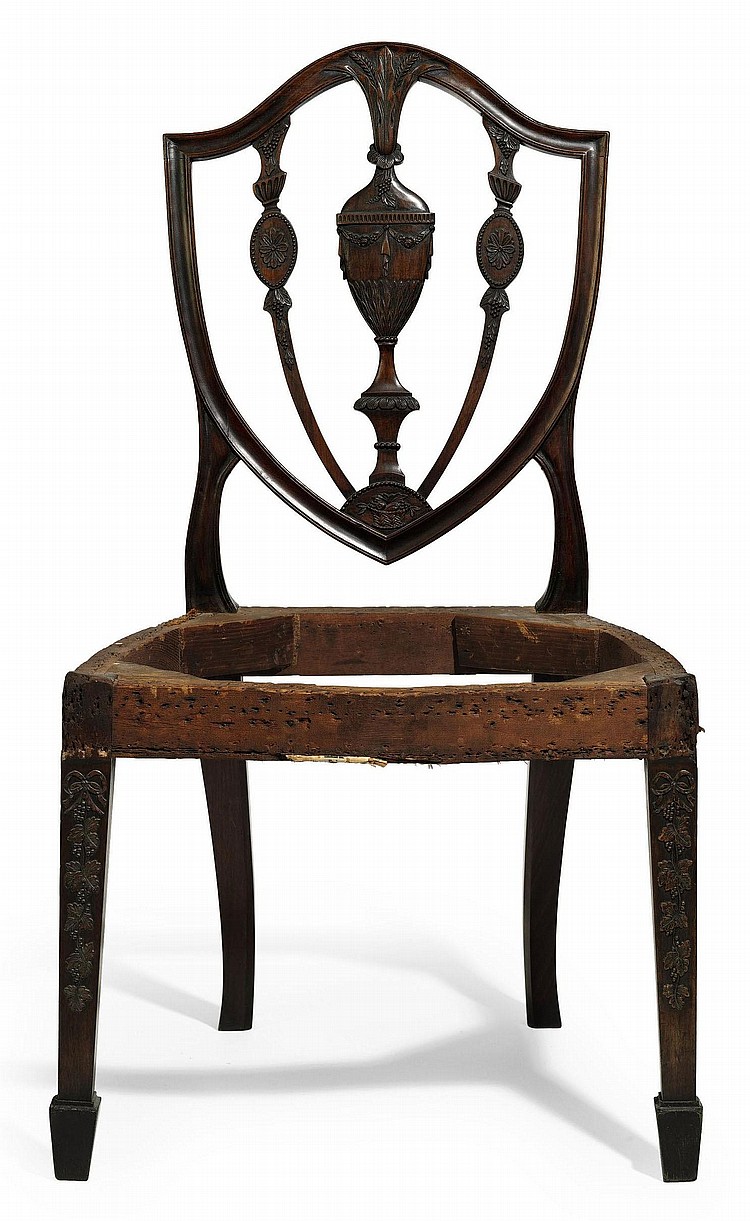 Adorned with exquisite ornament rendered by the celebrated designer and carver, Samuel McIntire (1757-1811), this side chair is a masterpiece of American Neoclassicism. The chair's urn, basket of fruit and grapevine carving illustrate not only his talents but also provide a glimpse of the lavish and coordinated interiors conceived and executed by McIntire for the illustrious Derby family of Salem.

Demonstrating a keen awareness of European fashion and his own ingenuity, McIntire drew upon the work illustrated in George Hepplewhite's The Cabinet Maker and Upholsterer's Guide (London, 1788), but altered and adapted these drawings to create his own unique designs. As noted by Dean Lahikainen, the chair is a variant of Hepplewhite's plate 2 with a shield-back, bow-front over-upholstered seat, straight tapering front legs and outward flaring rear legs, a model popular in Federal-era Salem. For the set represented by this chair, McIntire omitted the drapery running across the splat and instead embellished the urn with a more domed top and swags of festoons similar to that surmounting a bedstead design in plate 98 of Hepplewhite's Guide (Dean T. Lahikainen, Samuel McIntire: Carving an American Style (Salem, 2007), p. 231). The same bedstead design features pendant husks headed by a double-bow knot, a motif seen on the chair's front legs. McIntire's innovative contributions comprise the addition of oval reserves with floral interiors on the side bars of the splat, his distinctive basket of fruit in the base of the splat and the substitution of elaborate grapevines for the more ubiquitous pendant husks on the front legs.

The chair was part of an original set of probably eight chairs made for Elias Hasket Derby (1739-1799) (fig. 1) and his wife, Elizabeth Crowninshield (1736-1799), the most affluent and prominent citizens of Salem of the time and McIntire's most significant clients. Of the original set, five other chairs are in public collections, four at the Museum of Fine Arts, Boston, and one at Winterthur Museum. Building upon his family wealth by equipping privateers during the American Revolution and later pioneering trade with China, Elias Hasket Derby amassed a vast fortune and is often revered as "America's first millionaire." From the time of their marriage in 1762 until 1796, the couple lived in a large Georgian brick house built by Elias' father as a wedding present and which still stands on Washington Street in Salem. Beginning in 1794, the Derbys, particularly Mrs. Derby, began working with McIntire on designs for a new residence. This house, the Derby Mansion at 215 Essex Street, introduced a new level of grandeur and opulence to the Salem community. Overlooking the waterfront, it was described by a visitor in 1798 as "more of a palace than a dwelling of an American merchant" and in the same year was valued at $30,000, making it one of the two most valuable private houses in the country. It only stood completed for sixteen years and in 1815 was demolished to make way for a new town hall (Lahikainen, p. 219; Joseph Downs, "Derby and McIntire," Metropolitan Museum of Art Bulletin (October 1947), pp. 73-80; for the other chairs from the same set, see Charles Montgomery, American Furniture: The Federal Period (New York, 1966), pp. 76-77, cat. 15; Richard H. Randall, American Furniture in the Museum of Fine Arts, Boston (Boston, 1965), pp. 205, 207, cat. 166; Edwin J. Hipkiss, Eighteenth Century American Arts: The M. and M. Karolik Collection (Cambridge, MA, 1941), pp. 156-157, cat. 92).

While it is possible that the chairs represented by the chair offered here may have been commissioned for the earlier house and later moved to the Mansion, it is much more likely that they were made expressly for the Mansion as part of McIntire's elaborate furnishing scheme. The basket of fruit and foliage in the base of the splat, probably the most famous image of McIntire's oeuvre, is also seen in the same position on chairs McIntire made for John and Sarah Fiske in 1791, suggesting that this set may have been made around the same time (Lahikainen, pp. 54, 231, fig. 3-8). However, the details of the urns, baskets and grapevines seen on this set of chairs so closely resemble McIntire's sketches for the Mansion, which he began in 1794, that it is likely he designed the chairs to complement the interiors. As discussed by Lahikainen, the grapevine carving on the front legs display leaves with stems that extend the length of each leaf. This feature, a refinement that entailed more work for the carver, is seen in McIntire's 1796 sketch for the interior paneling of the oval dining room in the Derby Mansion (fig. 2). "Extended-stem" leaf carving is seen on only a few other pieces carved by McIntire, an urn stand, commode, sofa and window seat, all of which were probably made around the same time and may have been part of the same commission for the Derbys. In contrast, McIntire's grapevine carving that dates to after 1800 lacks the longer stems. Though the basket of fruit and foliage at the base of the chair's splat was a favored motif seen on many of his commissions, McIntire included similar baskets in his sketches for the door friezes of the northwest parlor of the mansion, possibly another means of unifying interior architecture and furniture through ornament. Furthermore, the urn at the center of the chair's splat, which was an adaptation of McIntire's from Hepplewhite sources, bears draped festoons similar to the urns with festoons or swags on the roof balustrade as depicted by McIntire in his sketch for the front elevation of the Derby Mansion. Lahikainen, pp. 220, 223, 228, figs. 5-7, 5-21).

Of the three surviving examples of sets of mahogany chairs made by McIntire for the Derby family, Lahikainen argues that the set represented by this chair appears in the 1799 inventory of the Derby Mansion and was later acquired by Elias' and Elizabeth's daughter, Elizabeth Derby West (1762-1814), for the furnishing of her renowned estate, Oak Hill. The 1799 inventory lists three sets of mahogany chairs, each a set of eight: Those upholstered in green silk, valued at $40, in the 2nd floor southeast chamber (master bedroom); those valued at $80, in the 1st floor southeast parlor (less formal dining room); those valued at $80 in the 2nd floor northwest front room (guest chamber). Referred to as "set B" by Lahikainen, this set of chairs was most likely either the set in the master bedroom or the dining parlor and later the same year purchased for $80 by Elizabeth Derby West (Lahikainen, pp. 223, 225-226, 231, 267, fn. 47). Later known as Madame Derby after her contentious divorce in 1806, Elizabeth Derby West followed in her mother's footsteps and patronized Samuel McIntire to create a grand residence with lavish and harmonious interiors. Like the Mansion, Oak Hill had many decorative details seen on this set of chairs. Baskets similar to those at the base of the splat adorn the door friezes of the Oak Hill parlor, and related urns with festoons appear on the magnificent chest-on-chest made for Elizabeth Derby's bedchamber, which like much of the interior woodwork of Oak Hill is now at the Museum of Fine Arts, Boston (Lahikainen, p. 244, fig. 5-56). Furthermore, another set of chairs, referred to as "set C" by Lahikainen, were most likely made for Oak Hill and display very similar grapevine carving, though lacking the extended stems (Lahikainen, p. 240). Supporting the likelihood that this set of chairs furnished Oak Hill, two of the chairs from the same original set and now at the Museum of Fine Arts, Boston are noted to have been owned by Elizabeth Derby West and inherited by her descendant, Martha C. Codman (Mrs. Maxim Karolik) (Randall, p. 207).