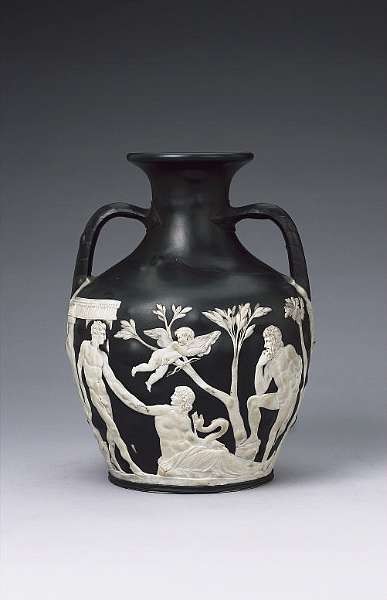 circa 1787-90
cast in 'Barberini Black' jasper, applied in white relief with the myth of Peleus and Thetis, the basal disc with a portrait believed to be of Paris, son of King Priam of Troy, the crisp reliefs with characteristic undercutting, 26.5cm high, unmarked (some kiln blisters and other evidence of misfiring, some losses to the relief at the rim of the base disk and to the head of one male figure, minor chipping around the footrim)

Provenance: Lord Dacre, the historian Hugh Trevor-Roper (1914-2003). Just a few days after the Duchess of Portland's sale in 1786, Josiah Wedgwood borrowed the vase in order to make copies in his jasperware. Soon after he had examined the Roman original, however, Wedgwood realised the enormity of the task and he asked Sir William Hamilton for advice. Wedgwood wrote... 'Several gentlemen have urged me to make copies of the vase by subscription, and have honoured me with their names for that purpose; but I tell them, & with great truth, that I am extremely diffident of my ability to perform the task they kindly impose upon me; and that they shall be perfectly at liberty, when they see the copies, to take or refuse them...' Josiah, aided by his son Josiah II, Henry Webber and William Hackwood worked the project for four years. Evidence of the problems they faced survive in the Wedgwood archives. On 24 March 1788 Josiah II wrote to his father...'The Barberini vase I mentioned is come out [of the kiln] this morning but the shoulder was turned too thin & it is sunk in.' In July 1789 Josiah wrote to Lord Auckland to explain his delay in producing the Portland vases and the difficulties he had experienced. He added 'The prospect, however, brightens before me, and, after having made several defective copies, I think I see my way to the final completion of it.' The Lord Dacre vase illustrates most of the distinctive features of the first edition, including the basal disc with the portrait of Paris where the tip of his elbow is cut off by the rim. The handles are slanted slightly from left to right. There is some slight undercutting to the applied figures, although there does not appear to have been much attempt made to shade the white relief decoration. During the kiln firing the neck sank slightly on one side of the vase, and numerous large blisters appeared. Robin Reilly, Wedgwood Jasper, pl 316A, p 222 illustrates a closely related 'trial' Portland Vase in the Wedgwood Museum and suggests this was a relatively early example from c.1787 before the refinements of shading and undercutting were introduced to the trials. A further badly blistered example in a private collection in New York also has a distorted neck. Once Josiah produced what he felt was the first successful vase, he sent it to Erasmus Darwin in September 1789. Wedgwood then began his marketing operation, placing the vase on public exhibition in London, followed by a promotional tour around the capitals of Europe. However, on 14 September 1790 Wedgwood wrote to his Son in Frankfurt '...With respect to the Barberini Vase... I have not yet been able to make another good one. I have fired five more since you left us, & not one near so good as that you have, nor indeed fit to shew...' There is some uncertainty as to how many 'First Edition' Portland vases were produced. The 'Oven Book' or kiln records list forty-five copies in total, and of these ten were broken. Other trials were likely to have been made and not recorded in the Oven Book. The successful examples were initially sold for 30 guineas, but a number remained unsold in the warehouse in 1828, ten being sold to the dealer Apsley Pellatt in 1829. Some of these may have been trials or faulty examples. It is interesting to note a receipt surviving in the Wedgwood papers dated 18 February 1878, recording the sale to Mr Joseph Holdcroft of 'an "old" seconds original Portland Vase for many years in the possession of the late Mr Aaron Wedgwood carver and gilder Burslem'. For further information on the Wedgwood copies of the Portland vase see Aileen Dawson, Masterpieces of Wedgwood, and Robin Reilly, Wedgwood Jasper.