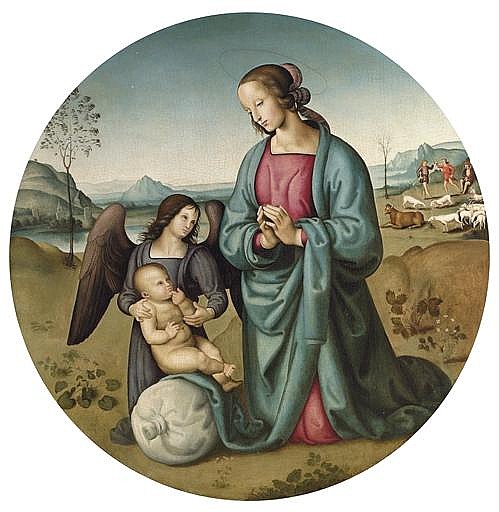 The Madonna and Child with an angel in a landscape

Lot 101: The Madonna and Child with an angel in a landscape

Circle of Pietro di Cristoforo Vannucci, il Perugino (Città della Pieve c. 1450-1523 Fontignano)
The Madonna and Child with an angel in a landscape
with an armorial label and seals on the reverse, bearing the arms of the Pignatelli family
tempera and oil on panel, tondo, unframed
39½ in. (100.4 cm.) diam.

Pignatelli (according to the arms on the reverse, with the inscription 'Camera de[..] volta facciata seconda').
with Carlo Gamora, Vienna, until 1824, when acquired from him (Liechtenstein Ankaufsverzeichnis [acquisitions list], no. 303) by
Johann I Josef, Prince of Liechtenstein, Duke of Troppau and Jägerndorf (1760-1836), and by descent in the Garden Palace at Rossau (where recorded by Falke in 1873 and 1885, loc. cit.); at Gaming, Styria, in 1941, until moved to Lauffen bei Ischl in February 1945, and thence to Schloss Vaduz, Liechtenstein in June 1945, until the present.

The princely house of Liechtenstein is the only surviving German-speaking monarchy, the last 'living branch' of the Holy Roman Empire and one of Europe's oldest noble families. Although the state of Liechtenstein is less than three hundred years old, the ruling family traces its lineage back to the middle ages. Their rise to power took place in the constituent countries of the Habsburg monarchy - Austria, Bohemia and Moravia - and the capitals of these - Vienna, Prague and Brünn became the centres of their activities. The territory of Liechtenstein itself was not influential in the family's affairs until relatively late in their history and Vaduz has only acted as the family's residence since the Second World War.

The history of the princely collections stretches back some four hundred years to around the time that the hereditary rank of prince was first bestowed upon the family in 1608 when Karl I, Prince of Liechtenstein (1569-1627) received the title from the Holy Roman Emperor Rudolf II. Inspired by the celebrated collection of Rudolf II, Karl began collecting and commissioning works of art on a major scale for his palaces at Feldsberg (now Valtice, Czech Republic) and Eisgrub (now Lednice, Czech Republic). The large Cavalry Battle, formerly attributed to Michele da Verona (lot 104), is the only one of his purchases in this sale. As well as paintings he had a special interest in sculpture, most notably commissioning from Adriaen de Vries in 1607 the life-size, bronze masterpiece, Christ the Man of Sorrows (Vienna, Liechtenstein Museum).

Karl was just the first in a remarkable line of rulers noted for their immense culture, wealth and passion for collecting. The collection of pictures formed by him and his successors over the next centuries encompasses an exceptional body of works from the Renaissance to the Romantic period that together constitute perhaps the most important private collection of its kind in Europe. The history of the formation of the collection is staggering in the quality and diversity of purchases, as well as in their sheer number. Each of these acquisitions was dictated not by curatorial criteria but to suit the highly individual tastes of successive princes, many of whose acquisitions are represented in this sale.

Karl I's son Prince Karl-Eusebius (1611-1684) became an avid buyer of pictures and is now recognised as the principal founder of the Liechtenstein picture gallery. Records of the many dealers who offered him pictures bear witness to an intense and highly informed pattern of buying. He was the first member of the family to make systematic use of the art trade and established links with the Antwerp dealers Alexander and Wilhem Forchoudt, who had a gallery in the Judenplatz in Vienna. The collection was divided between his summer palace at Eisgrub and his main residence at Feldsburg, where the pictures hung in a purpose- built, vaulted chamber. By the end of his life, his picture collection had become so large that he was forced to refuse works that were offered to him on grounds that he did not know where to hang them.

Karl-Eusebius's taste was relatively restrained by comparison with that of his son Prince Johann Adam I (1657-1712), perhaps the greatest of all the collectors of the family. With enormous wealth and an excellent education in the arts, Johann Adam set about buying pictures of the highest quality, choosing them entirely according to his personal taste. Instead of cabinet pictures that demanded quiet and careful appreciation, he favoured bold life-size figure paintings with a penchant for Bolognese baroque artists, an idea of which is given by the Saint John the Baptist, formerly attributed to Guido, and the vast Ecce Homo here given to Lionello Spada, both included in this sale (lots 123 and 125). However, the Prince's overriding preference was for Rubens and Van Dyck. His momentous acquisition of the Decius Mus (Vienna, Liechtenstein Museum) cycle in 1696 laid the foundation for the exceptional collection of works by Rubens that grew steadily in the ensuing years. Johann Adam, like his predecessors, took an active interest in architecture and under his rule their properties grew considerably, with the building of Schloss Plumenau (Plumlov, Czech Republic) from 1680, the Liechtenstein Summer Palace in Rossau, Vienna, (the current home of the museum) completed in 1702, and the Stadtpalais in the Bankgasse, Vienna, finished in 1711. After the completion of the latter, Johann Adam moved the bulk of the art collection there from Feldsberg, establishing the palace as a centre of cultural activity in Vienna.

The collection continued to grow, albeit at a much steadier rate during the reign of Prince Josef-Wenzel (1696-1772). He developed a taste for topographical views and notably commissioned the celebrated views of the Summer Palace from Bellotto (Vienna, Liechtenstein Collection). He did not remove anything from the galleries in the Stadtpalais, but inventories show that Josef-Wenzel had 632 pictures, largely inherited from his cousin, at his residence in the Herrengasse. Other members of the family were collecting on a vast scale at the same time: Emmanuel von Liechtenstein (1700-1771) had 600 pictures at Schloss Loosdorf in Lower Austria in 1722, while his uncle Hartmann (1666-1728) had over 800 pictures at nearby Schloss Nieder-Absdorf.

The large majority of pictures in this sale were acquired by Alois's brother and successor, Prince Johann I (1760-1836) and his grandson, Prince Johann II (1840-1929). The former initiated a new phase of large-scale acquisition and re-organisation of the collection, and it was under his stewardship that the collection was transferred from the Stadtpalais to the Summer Palace in Rossau. He favoured seventeenth century Dutch pictures with a special penchant for landscapes, such as Frederick de Moucheron's Wooded River Landscape (lot 122) which reflected his own passion for gardens and parks. He was also a keen collector of large Italian pictures, examples of which can be seen in this sale in works such as Lucio Massari's Saint Paul at Ephesus (lot 129), and Antonio Zanchi's Allegory of Time (lot 131). The extent of his buying is revealed by an inventory of his acquisitions, drawn up after his death, which lists a total of 711 paintings - the largest increase to the collection since the reign of Prince Johann Adam I (1657-1712).

Many of the earlier Italian pictures in this sale were acquired by Prince Johann II, who was an art historian in his own right and whose interests lay chiefly in Italian and Netherlandish painting from the fourteenth and fifteenth centuries. For many of his major Italian purchases he relied on the famous Florentine dealer Stefano Bardini, an example of which can be seen in the Virgin Annunciate, formerly attributed to Francesco del Cossa (lot 108), that he acquired from him in 1894. As a result of his purchases, Italian renaissance pictures, which had previously been rather thinly represented, became a major focal point of the collection. Nevertheless, the collection shrunk slightly under his reign. He weeded out some pictures for an auction in Paris and made extremely generous donations to public museums in Prague, Troppau and particularly Vienna. The gallery catalogue of 1885 lists only 839 works compared with 1451 twelve years before.

After a turbulent time during the Second World War, especially in the last weeks of the war, the collection was transferred to Vaduz and a period of consolidation followed.

A new sustained period of collecting began in the mid 1970s under the guidance of Prince Hans-Adam II of Liechtenstein, who continues in the remarkable family tradition of collecting. Over 500 works of art have been acquired for the collection and this sale is intended to create much needed extra space to exhibit them.

The design derives from that of the central panel of Perugino's Pavia polyptych, now in the National Gallery, London, no. 288, a later variant of which--widely, but not necessarily correctly, considered to be autograph--is in the Palazzo Pitti, Florence. The direct prototype is a tondo, which differs in the placing of the plants and excludes the small tree on the right, in the Ca' d'Oro, Venice. Recently cleaned, this is attributed by F. Ortenzi to Eusebio da San Giorgio in the catalogue of the exhibition Pintoricchio (Perugia, Galleria Nazionale dell'Umbria, 2008, no.84), a view dismissed by F. Russell (review, Apollo, May 2008, p.100).

The Pignatelli family, who likely owned the tondo before it was with Carlo Gamora, were an international house, with members in Naples, Paris, London, Brussels and Vienna -- and it is possible that the painting was in Vienna when Gamora acquired it. We are grateful to Jan van Helmont for identifying the arms and providing information on the family.