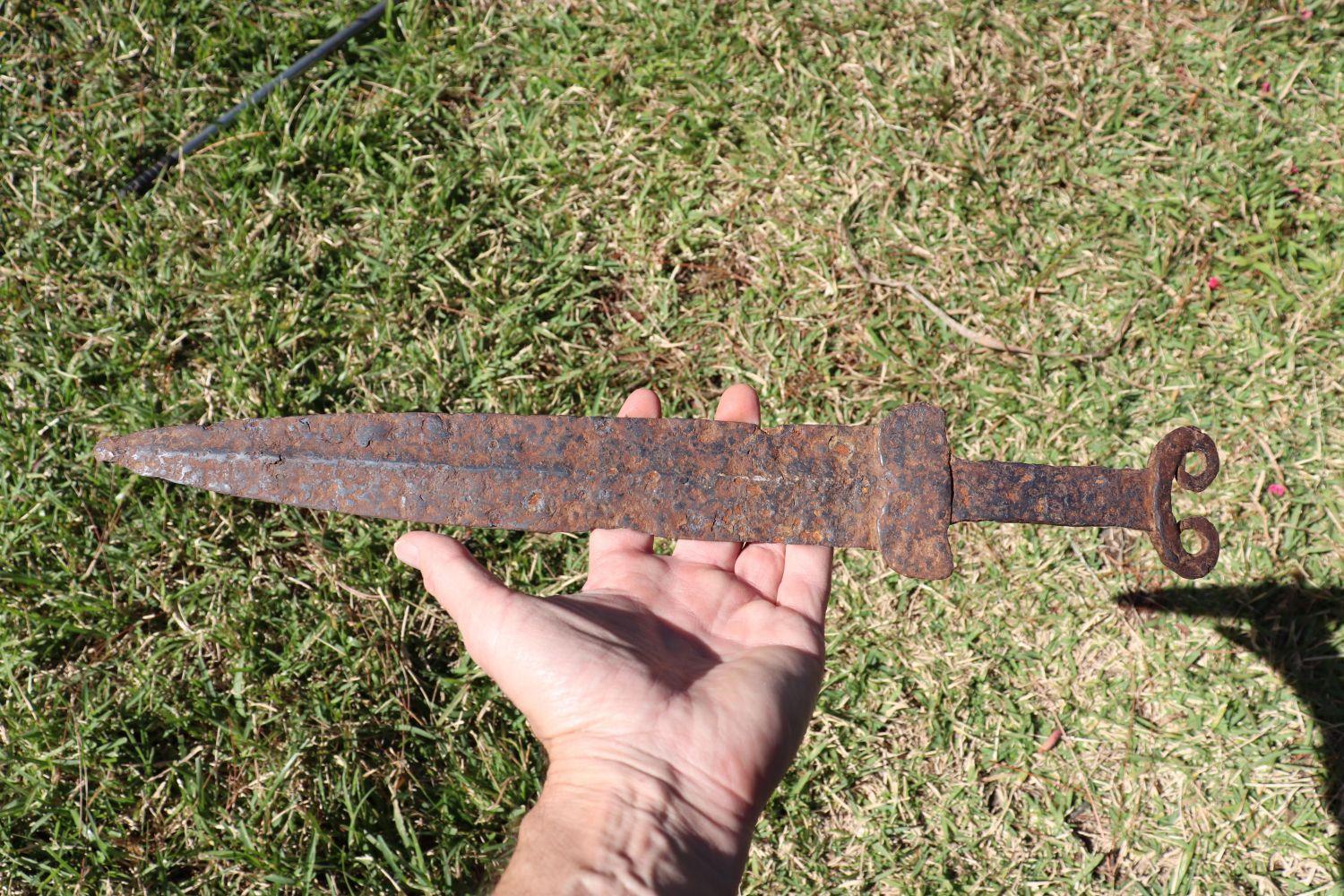 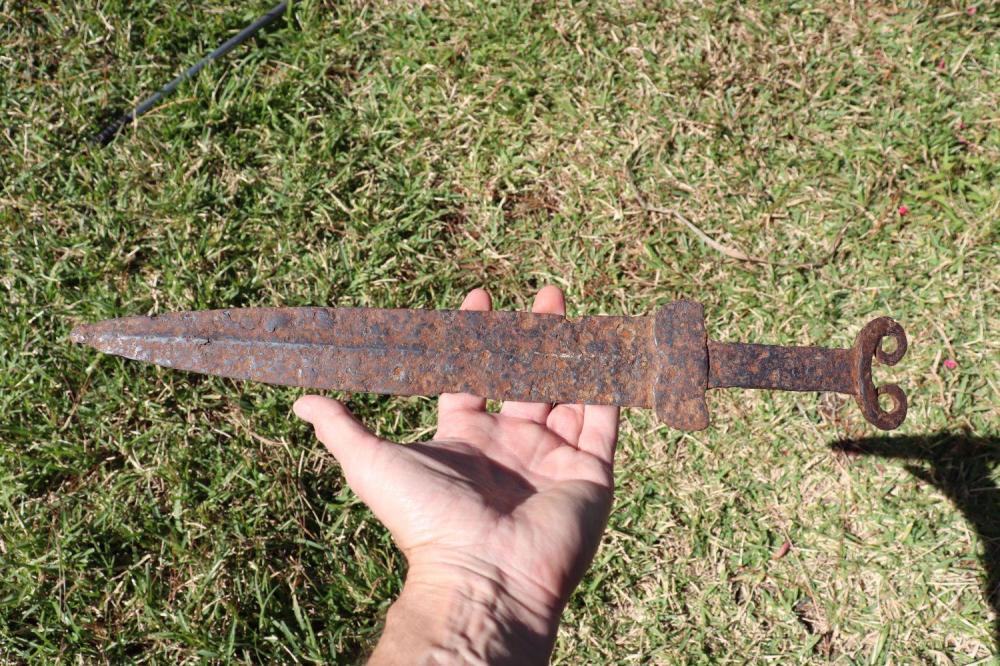 The original Sarmathian-Scythian iron short sword Akinakes, 300-500 BC. Weight: 472 g = 1 lb. 0.7 oz.; Length: 45.7 cm = 18 inches; Strong attraction to the magnet. Condition: natural rust, not treated, still strong. Found in the steps of the Northern Coast of Black Sea. The Sarmatians (/sɑːrˈmeɪʃiənz/; Greek: Σαρμάται, Σαυρομάται; Latin: Sarmatae [ˈsar.mat̪ae̯], Sauromatae [sau̯ˈrɔmat̪ae̯]) were a large Iranian confederation that existed in classical antiquity, flourishing from about the 5th century BC to the 4th century AD. Originating in the central parts of the Eurasian Steppe, the Sarmatians were part of the wider Scythian cultures.[1] They started migrating westward around the 4th and 3rd centuries BC, coming to dominate the closely related Scythians by 200 BC. At their greatest reported extent, around 1st century AD, these tribes ranged from the Vistula River to the mouth of the Danube and eastward to the Volga, bordering the shores of the Black and Caspian seas as well as the Caucasus to the south. Their territory, which was known as Sarmatia (/sɑːrˈmeɪʃiə/) to Greco-Roman ethnographers, corresponded to the western part of greater Scythia (it included today's Central Ukraine, South-Eastern Ukraine, Southern Russia, Russian Volga and South-Ural regions, also to a smaller extent north-eastern Balkans and around Moldova). In the 1st century AD, the Sarmatians began encroaching upon the Roman Empire in alliance with Germanic tribes. In the 3rd century AD, their dominance of the Pontic Steppe was broken by the Germanic Goths. With the Hunnic invasions of the 4th century, many Sarmatians joined the Goths and other Germanic tribes (Vandals) in the settlement of the Western Roman Empire. Since large parts of today's Russia, specifically the land between the Ural Mountains and the Don River, were controlled in the 5th century BC by the Sarmatians, the Volga–Don and Ural steppes sometimes are also called "Sarmatian Motherland".[2][3] The Sarmatians were eventually decisively assimilated (e.g. Slavicisation) and absorbed by the Proto-Slavic population of Eastern Europe.[4] The acinaces, also spelled akinakes (Greek ἀκῑνάκης) or akinaka (unattested Old Persian *akīnakah, Sogdian kynʼk) is a type of dagger or short sword used mainly in the first millennium BC in the eastern Mediterranean region, especially by the Medes,[1] Scythians and Persians, then by the Greeks.[2] The acinaces is of Scythian origin, but was made famous by the Persians, and rapidly spread throughout the ancient world. The Romans believed this weapon originated with the Medes.[2] The acinaces is typically 40–60 cm. (14-18 in.) in length and double-edged,[2] and although there is no universal design, the guard may be lobed[3] with the hilt resembling that of a bollock dagger, or the pommel may be split[4] or of the "antenna" type.[5] The scabbard as much as anything else defines the acinaces and usually has a large decorative mount near the opening allowing it to be suspended from a belt on the wearer's right side.[6][2]