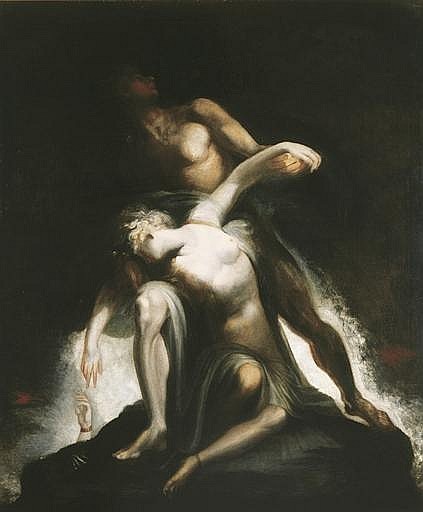 The Vision of the Deluge

The Milton Gallery, for which this picture was painted, occupied Fuseli for almost the whole of the 1790s. A number of remarkable historical and literary galleries had preceded it in the 1780s of which the most important were John Boydell's Shakespeare Gallery and Thomas Macklin's Poets Gallery. Such galleries had sought to celebrate the genius of British art and capture the sublimity of the great national poets in the form of paintings, as well as being commercial enterprises. Fuseli had been one of the biggest contributors to Boydell's Shakespeare Gallery, where his pictures received wide critical acclaim, but his dissatisfaction with his financial recompense and his resentment at Boydell's greater concern with profit than with the promotion of history painting prompted him to venture a scheme over which he could retain complete control. In a letter to William Roscoe, dated 17 August 1790, Fuseli expressed his determination to attain financial independence by imitating Benjamin's West's example and meditating a scheme of his own:
There are, says Mr. West but two ways of working successfully, that is lastingly, in this Country, for an artist; the one is to paint for the king, the other to meditate a scheme of Your own ... In imitation of So great a man I am determined to lay, hatch and crack an egg for myself too - if I can. (D. Weinglass, op. cit., p. 61).

Fuseli's Milton Gallery was originally conceived to celebrate Britain's greatest epic poet by providing illustrations to accompany a sumptuous new edition of Milton's works to be edited by William Cowper and published by Joseph Johnson. But Cowper's insanity forced Fuseli to go it alone. Unlike the galleries of Boydell and Macklin, Fuseli's Milton Gallery was self-capitalized. This left him chronically short of funds and he leaned heavily on the patronage of his friends, the Liverpool banker and art collector William Roscoe (1753-1831) and the Shakespeare scholars George Steevens (1753-1800) and William Seward (1737-1799), and others who were supposed to underwrite the project. It was an artistic endeavor on an heroic scale, for which Fuseli single-handedly provided all the paintings, whereas the commercial galleries relied on the combined contribution of numerous artists. The strain that this hugely ambitious project had on the painter, both mental and financial, is evident in the letters he wrote to his friends and patrons in those years. Some of the frustration and anguish he experienced he vented in a poignant letter to William Roscoe, dated 26 February 1794, in which he pleaded for moral and financial support:
Ever since I saw You I have incessantly attended to Milton, for, ever since I saw you, I have had nothing else to do - I am in a state of a man bleeding to death for want of a kind hand to stop the gash. The very work that I hoped, that I am Still Confident, would make me ... has for the present deprived me of all other helps, and must, if I can obtain no assistance, in the end undo me. (D. Weinglass, op. cit., p. 90).

The gallery opened to the public in 1799 at rooms leased from the auctioneer James Christie in the old Academy building on Pall Mall. It originally comprised forty paintings of varying formats; a further seven were later added for the exhibition in 1800. This picture, which was number 25 in the gallery, illustrates the passage in Milton's Paradise Lost where in one of six visions the Archangel Gabriel shows Adam the consequences of original sin:
...and now the thick'nd Sky
Like a dark Ceiling stood; down rush'd Rain
Impetuous... ...sea covered Sea, Sea without shore... How did'st thou grieve then, Adam, to behold The end of all thy offspring, end so sad, Depopulation!
(Paradise Lost, Book IX, v. 742-754)

The picture remained untraced until its reappearance in 1991. It was known to Gert Schiff only through a second version, in a smaller format (158 x 119 cm.), which Fuseli exhibited at the Royal Academy in 1818 (no. 226). This replica remained in the artist's possession and was in his posthumous studio sale at Christie's on 28 May 1827 (lot 51); it is now in the Kunstmuseum, Winterthur (G. Schiff, op. cit., 1973, no. 901). Preliminary sketches for the composition are in the Oskar Reinhart Museum, Winterthur, and the Kunsthaus, Zurich (ibid., nos. 1024-5). The original Milton Gallery picture was engraved by Normand Fils for John Young's catalogue of the Angerstein Collection of Pictures of 1823 (loc. cit.).

This picture was bought after the 1799 exhibition at the Milton Gallery by the celebrated collector John Julius Angerstein (1735-1823). Following his death, Angerstein's famous collection of old master pictures at 100 Pall Mall, London, was purchased by the British Government for £57,000 and formed the nucleus of the National Gallery which opened at his house on 10 May 1824 as the country's first publicly owned collection. Angerstein also acquired three other monumental works from the Milton Gallery: The Creation of Eve (G. Schiff, 1973 op. cit., 1973, no. 897); Satan Starting from the Touch of Ithuriel's Spear (G. Schiff, op. cit., 1973, lost work, no. 38) and Eve, new created, led to Adam (G. Schiff, op. cit., 1973, p.650, lost work, no. 40). The latter picture (Hamburg, Kunsthalle) is of the same size as that of the present picture before it was cut down to its present size sometime after it was sold at Christie's in 1896. Both these pictures descended to John Julius Angerstein's grandson, William Angerstein, and were sold in his sale, at Christie's in 1896 (lots 104 and 105 respectively). The 1896 sale included, among other masterpieces of the British School, Sir Joshua Reynolds' portraits of Mr and Mrs Angerstein, and Sir Thomas Lawrence's portraits of John Julius Angerstein, Mrs Amelia Angerstein and Mrs William Locke. Of the original forty-seven pictures exhibited in the two exhibitions at the Milton Gallery, Weinglass has accounted for nearly thirty. This is one of the six largest of the surviving original pictures.

We are grateful to Professor D.H. Weinglass of the University of Missouri, Kansas City, for his help in preparing this entry. He will be including it in his forthcoming revised English edition of G. Schiff's catalogue raisonné of the artist's work.