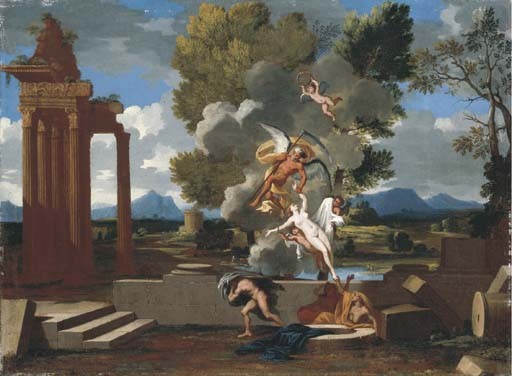 Previously regarded as an autograph work by Nicolas Poussin, Christopher Wright (loc. cit.) quoted the stylistic similarities between the present work and Poussin's Landscape with Saint Matthew (Staatliche Museen, Berlin-Dahlem), while also pointing out that 'this composition is an especially successful combination of an elaborate arrangement of figures set in an idealised landscape based on the Roman Campagna'. While Poussin did paint a circular version of Time and Truth destroying Envy and Discord for Cardinal Richelieu in 1641 (Musée du Louvre, Paris), the present work has since been convincingly re-attributed by Lucie Galactéros-de Boissier to Thomas Blanchet. She cites the strong influence Poussin's work had on Blanchet while in Rome during the late 1640s and early 1650s and calls this work 'typique du Blanchet Romain' (loc. cit.) citing the composition, ruins, trees and figures as evidence of Blanchet's hand. To strengthen this argument Boissier makes reference to other pictures by Blanchet such as Cleobis et Biton (Galleria Nazionale, Rome), Alexandre sacrifiant au tombeau d'Achille (Musée du Louvre, Paris), both similarly painted during his Roman period.

Born in Lyon, Thomas Blanchet trained in Paris with Simon Vouet (c. 1635-45) and then in Rome (1645-53), where he was absorbed into the dynamic circle of artists around Nicolas Poussin. In 1654 he created a mausoleum for Reni de Voyer d'Argenson, Ambassador of France in Venice, in S. Giobbe, Venice. By 1655 Blanchet was elected painter-in-chief for the city of Lyon, where he displayed great versatility in many civic projects involving his combined skills as a painter, draughtsman, architect, sculptor and print-maker.