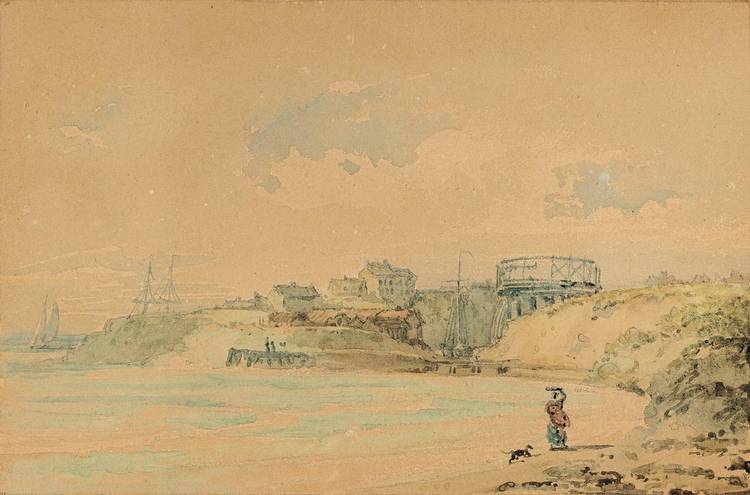 inscribed on old label attached to the backboard: On the coast of /Northumberland/T.Girtin

This important and unrecorded watercolour by Girtin depicts the town of Seaton Sluice which lies on the south-east of the Northumberland coast, on the border with North Tyneside. The town, as shown here, consists of a handful of cottages positioned on a small tidal basin with two outlets, one natural and one man-made. The man-made channel can be seen in the foreground of the picture with its ingenious system of dock gates. In the distance, tall masts of ships appear above the land, anchored near the natural channel of the Seaton or Holywell Burn.

The present watercolour dates from 1796, the year when Girtin came of age and set out on his first independent tour, travelling to Yorkshire, Northumberland and the Scottish Borders. The only Girtin sketchbook that survives intact from this trip is the Shepherd Sketchbook of 1800-1801 (Whitworth) and a few scattered drawings and watercolours, such as the present work. A pencil drawing of Seaton Sluice, of the same size as this watercolour, is recorded in the collection of H.M.Gaskell (see Thomas Gitin and David Loshak, The Art of Thomas Girtin, 1954, p.161, no.199). It is inscribed on the verso 'Hartley' and 'Mrs Park' possibly indicating the patron who commissioned the view. It was from the sketches and drawings that Girtin made during his tour of 1796 that he produced a large number of finished watercolours, ten of which were shown at the Royal Academy in 1797. He continued travelling for the rest of his career visiting the West Country and perhaps Yorkshire again in 1797, North Wales in 1798 and Yorkshire once more in 1799.

Seaton Sluice Harbour was built by Sir Ralph Delaval in the seventeenth century and became the focus for the glassworks, brewery, brickworks, lime kiln and quarry all focused around the harbour. Stone walls were raised, piers were built at the north entrance to the natural harbour and a system of sluice gates installed. These developments, however, were not entirely successful due to the limited depth of water in the natural harbour and the difficulty of access for the boats. By the middle of the eighteenth century Sir John Hussey Delaval and his brother, Thomas Delaval, designed a new harbour which involved cutting a deep channel through solid rock. By 1764 the work was completed and the new harbour became widely acclaimed as a major feat of engineering. By 1820 the harbour had declined and in 1862 it fell into decay because of the collapse of the local coal trade