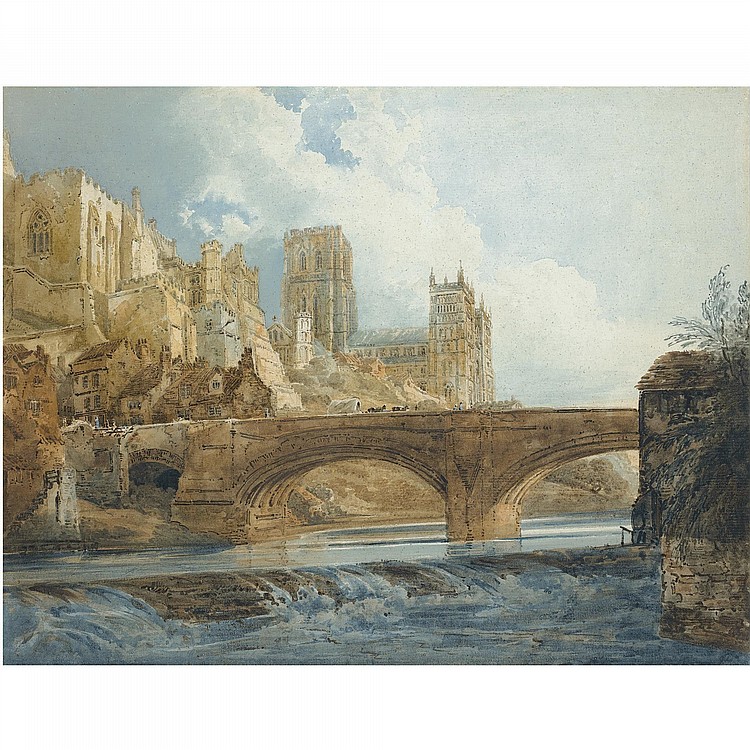 The view of Durham from the river was described by Girtin's contemporary Richard Warner, as a place of 'inconceivable majesty.' [1.] This rare watercolour illustrates that statement. Girtin was an exceptionally talented young artist who died tragically young but whose greatness Turner fully acknowledged when he later claimed, 'if Tom had lived, I would have starved.' This statement was surely an exaggeration but Girtin was certainly an intimidatingly talented contemporary whose work does appear markedly more powerful when one compares this view of Durham with the young Turner's own view, c. 1798-9 (Royal Academy Collection).

Girtin presents Durham's medieval cathedral and castle from the banks of the River Wear. The view includes the Framwellgate Bridge and demonstrates Girtin's mastery of perspective as well as of architectural and topographical detail. The composition is lit from the right, highlighting the castle and cathedral whilst plunging the foreground, as well as part of the bridge and building to the right, into deep shadow. The treatment of the sky echos the contrast, with light blue offset against darker brooding clouds. Girtin infuses the scene with a vibrant sense of life through the inclusion of the fast moving water cascading over the weir, and the colourfully dressed figures and a horse and cart travelling over the bridge.

The watercolour is based on a large pencil drawing (Museum of Fine Arts, Boston), which Girtin executed on his tour of the north of England and the Borders of Scotland in the late summer of 1796. There is also a very similar second watercolour also based upon the Boston pencil drawing (Whitworth Art Gallery, Manchester). The Manchester watercolour is signed and dated 1799 and thought to have been drawn before the present work.

This impressive watercolour was first owned by the esteemed art collector Henry Vaughan (1809–1899). Born in London Vaughan became a devoted and eclectic collector of works of art, especially of prints and drawings by J.W.M. Turner, with whom he was personally acquainted. He was a member of the Athenaeum, was elected a Fellow of the Society of Arts in 1879, and was one of the founders and most active members of the Burlington Fine Arts Club. Though undoubtedly one of the outstanding English collectors of his time, and a generous lender to exhibitions and museums, he appears to have been something of a recluse, whose reputation is largely based on his important gifts and bequests to British museums. He died, unmarried, on 26 November 1899, at 28 Cumberland Terrace, Regent's Park, London, where he had lived since 1834.

In 1886 Vaughan had presented (anonymously) John Constable's celebrated Hay Wain to the National Gallery, having bought it at Christies twenty years earlier. In 1887 he gave five important Michelangelo drawings, all bought at the Woodburn sale in 1860, to the British Museum. By his will Vaughan distributed his wealth among various medical charities and hospitals, and the bulk of his art collections among museums. Thus the British Museum department of prints and drawings received a further five hundred and fifty items, including fifty-seven old master drawings, over three hundred drawings by John Flaxman, Thomas Lawrence, and Thomas Stothard, and, above all, nearly a hundred proofs of Turner's Liber Studiorum and twenty-three drawings connected with it. Some of the drawings were transferred from Vaughan's bequest to the National Gallery, which also received various sculptures and Italian and British paintings (the latter now in the Tate collection). To the Victoria and Albert Museum he assigned his collections of stained glass and carved panels, six Turner watercolours, and the full-scale studies for Constable's Hay Wain and Leaping Horse, which had been on loan to that museum since 1862. To University College, London, he bequeathed the remainder of his Liber prints, his collection of Constable mezzotints, his Rembrandt etchings and other prints, and a number of English drawings. The rest of Vaughan's outstanding and scholarly collection of Turner watercolours—he was described by Ruskin as 'a great Turner man' —was divided between Edinburgh and Dublin. The National Gallery of Scotland received a representative selection of thirty-nine drawings, and a similar group of thirty-one drawings went to the National Gallery of Ireland. John Lewis Roget who acquired this work from Vaughan was also a significant figure in the nineteenth century and was the author of the two volume 1891 history of The Old Water-colour Society. We would like to thank Professor Luke Herrmann for his assistance in researching this watercolour.