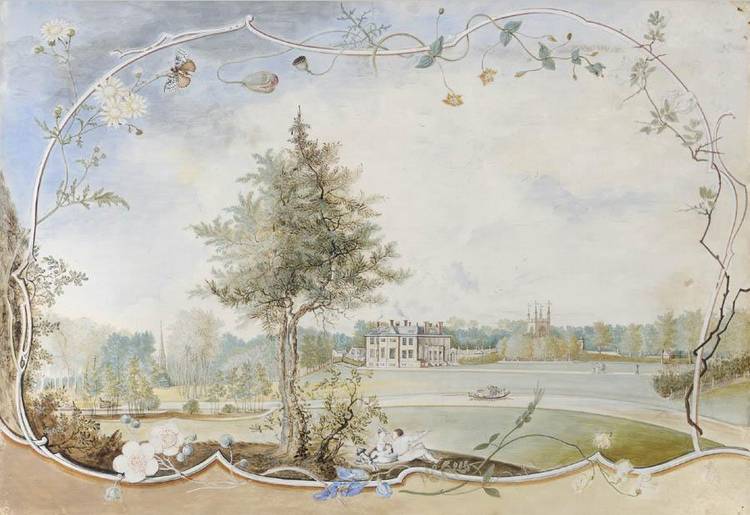 watercolour, pen and brown ink and bodycolour over pencil on vellum

This extremely rare and delightful watercolour by Thomas Robins presents a view of the expansive grounds at Honington Hall in Warwickshire. In the foreground the artist, Thomas Robins, is seen seated with the wife of his patron, Joseph Townsend. He gestures with his paint brush towards the Hall which is seen surrounded by woodland in the far distance. A stream winds through the centre of the composition where a boating party can be seen enjoying their tranquil surroundings. The trees and shrubbery are all depicted in minute detail and so also is the garland of flowers which frames the composition. This garland mostly shows common English wildflowers, but all of them are identifiable. On the left, a Ragwort (Senecio sp.), in the centre a corn poppy (Papaver rhoeas) intertwined with a Scarlet Pimpernel (Angallis arvensis). On the right is a Spiny Vetch (possibly Ononis spinosa) and below the Yellow Vetchling (Lathyrus pratensis) and the Tufted Vetch (Vicia cracca) in the centre. On the left are the only foreign flowers, probably the Rubus odoratus, a native of North America.

The gardens at Honington Hall, the seat of Joseph Townsend, were almost contemporary with those at Stourhead. Following his marriage in 1744 Townsend set about making improvements to the house and gardens. It is thought that he commissioned John Freeman of Fawley to design the exhuberant rococo plasterwork interiors of the house and following their completion (circa 1751-2) he consulted Sanderson Miller to design the grounds. Miller worked there until at least 1760, creating gardens that reflected the style of the interior of the house. In the summer of 1759, when Miller has almost finished working on the grounds, Robins was commissioned to make drawings of them as a record for Townsend and posterity.

Robins was born in Chalton Kings near Cheltenham and although he worked a great deal from Bath, he did not finally move there until 1760 when he bought a house in Merchants Court off the Market Place. Known as the 'Limner of Bath' he produced many watercolours of the city and its environs. He was also well known for his prospects of houses and gardens which he typically framed with borders of flowers, birds, shells and butterflies. Unlike his precursors, Kip, Rocque and Rigaud, however, his topographical work was not engraved and after his death his work was slowly forgotten. For a while his watercolours were confused with those of his son, Thomas Robins junior, but gradually enough of his work emerged from country houses, public libraries, museums and private collections for it to become clear that many of these works pre-dated Thomas Robins junior and that there were, in fact, two Thomases, and not one.

The importance of Thomas Robins' watercolours lies is the fact that they provide the only topographical record of English country houses and their gardens between the appearance of Rocque and Badeslade's Vitruvius Brittanicus volume the fourth of 1739 and Watt's Seats of the Nobility and Gentry of 1779. During the span of his working career from 1747 until 1766 Robins captured a fashion of garden design that soon disappeared. The gardens which he drew with their serpentine water ways and paths, fretwork fences and bridges and whimsical temples and pavilions were no longer popular by the late eighteenth century. Thomas' record was unique and, in the words of John Harris 'he was a rococo artist and his gardens are the emodiment of rococo art' (John Harris, Gardens of Delight: The Art of Thomas Robins, Royal Institute of British Artists exhibition catalogue, 1975, p.4)