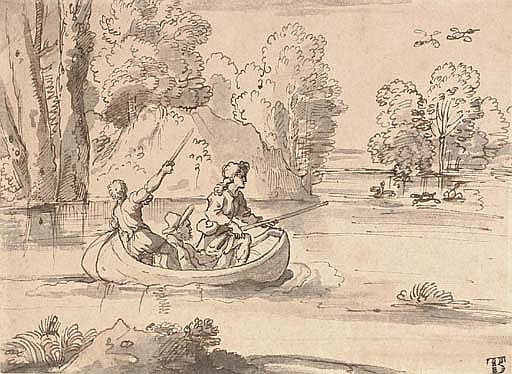 The foundations of the Loyd Collection were laid in the 1830s by Samuel Jones Loyd (1796-1883), later Lord Overstone. Loyd, only son of Lewis Loyd, a banker, was educated at Eton and Trinity College, Cambridge. He was Liberal Member of Parliament for Hythe from 1819-1826, but was destined to join the banking house established as a partnership between his father, a Unitarian minister until his marriage, and the latter's father-in-law John Jones. Samuel Jones Loyd was generally recognised as one of the outstanding figures of the banking world, and the Bank Charter Act passed by Peel's government in 1844 was largely based on his recommendations. In the same year he became chairman of Jones, Loyd & Co. In 1863 the bank was incorporated with the London and Westminster Bank, an ancestor of NatWest.

Loyd was also an outstanding collector and patron and lover of the arts. His first acquisition was made in 1831, and the collection of paintings by the Old Masters and later contemporary artists grew rapidly with works by artists such as Murillo, Wouwermans, Carlo Dolci, Both, Koninck (bought as Rembrandt), Teniers, Rosa and Sassoferrato bought both from dealers and at the major auctions of the period. His most celebrated coup was the purchase, in 1846 in partnership with fellow bankers Thomas Baring and Humphrey St. John Mildmay, of the celebrated collection of Baron Verstolk van Soelen (also a major collector of drawings, see lot 101 in the present sale). Loyd's share was ten major Dutch pictures, including works by Steen, Hobbema, Hackaert, Pynacker and the Portrait of Margaretha Trip attributed to Rembrandt. As this grew, the collection inevitably developed and was influenced by fashion, with French and English pictures including three Turners added to the group, but the focus in the London house, No. 2, Carlton Gardens, remained on the Dutch masters.

Overstone's collection of drawings is less well documented. Many of the drawings in Lord Overstone's collection bear the mark TB (L. 416a), which Lugt erroneously describes as having been found underneath and therefore predating Sir Joshua Reynolds' mark. The reverse is in fact the case, and as the mark has been found on six volumes of prints bearing his bookplate it can be identified as that of Thomas Blayds, of Castle Hill, Englefield Green, Surrey. Every recorded drawing with the mark was in Overstone's collection, and it must be inferred that he purchased them en bloc. Blayds' collection was mostly of paintings, but his posthumous sale at Christie's on 29 March 1849 lists as lot 36 'A Collection of Drawings by Old Masters, in 2 Scrapbooks, half-bound morocco', which sold for 23 guineas to 'Thatcher'. It seems most likely that that these albums held many of the Blayds drawings later found at Overstone.

In 1850 Loyd was created Baron Overstone, and in the same year became a Trustee of the National Gallery. This last was to become a major preoccupation, and he often acted as personal guarantor for purchases and as the Gallery's advocate in the House of Lords. Overstone's collection at No. 2 Carlton Gardens was described in detail by G.F. Waagen in his The Treasures of Art in Great Britain (1857). In 1858 Overstone's only daughter Harriet married Major Robert Lindsay, V.C., later Lord Wantage, who added the Loyd surname to his own. Overstone settled Lockinge, his house in Oxfordshire, on the couple after their marriage. The Loyd-Lindsays were also keenly interested in pictures and added to the collection. Lord Wantage died in 1901, and on Lady Wantage's death in 1920 the pictures at Carlton Gardens passed to her husband's nephew, the 27th Earl of Crawford, while those at Overstone and Lockinge passed to her cousin, A.T. Loyd. Lockinge House was demolished in 1947.

In the catalogue entries the following works have been referred to in abbreviated form:

Russell: [L. Parris], The Loyd Collection of Paintings, Drawings and Sculptures, 1967, revised and with a new introduction by Francis Russell, 1991.


Closely comparable hunting and fishing scenes are in the long series of landscapes, inspired by Carracci drawings in the Jabach Collection, now in the Louvre (J. Guiffrey and P. Marcel, Inventaire Général des Dessins du Musée du Louvre: Ecole française, II, Paris, 1948, nos. 2622-2644). Michel Corneille II went to Rome in 1659, returning to Paris to be received into the Académie Royale in 1663. He held a number of posts with the Académie, and also acted as curator, restorer and engraver of drawings for the banker Everard Jabach and later for King Louis XIV. Corneille expanded on his series of engravings after Carracci landscapes in Jabach's collection (left unfinished after the latter's bankruptcy in 1671) by drawing a series of landscapes inspired by the Bolognese master's style and compositions.