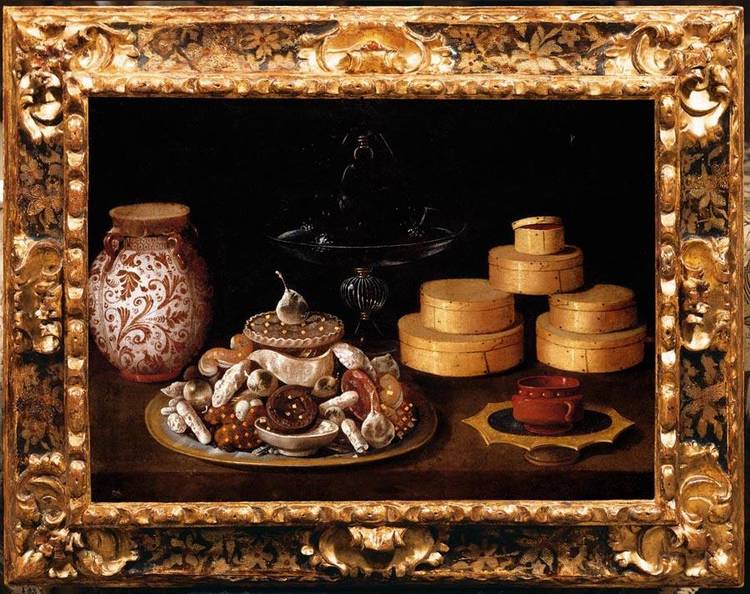 oil on canvas, in a Spanish carved and gilt wood frame

STILL LIFE OF SUGARED FRUITS, PASTRIES, TURRONES AND SWEETS ON A PARCEL GILT PLATE, TOGETHER WITH A MANISES HONEY JAR, A GLASS VASE AND FOUNTAIN, A STACK OF SWEET BOXES AND A BÚCARO ON A PARCEL GILT TAZZA, ALL ARRANGED UPON A TABLE TOP

This hitherto unrecorded still life represents an important addition to the oeuvre of the pre-eminent still life painter working in Valencia during the 17th century, Tomás Hiepes. The painting can be dated to the period of the artist's early maturity, during the first half of the 1640s, and in the selection and configuration of still life objects, along with the sparse use of colour and reduced palette, it constitutes one of the most refined and subtle creations by the artist.

During the 17th century Valencia was an important provincial capital in Spain, which enjoyed strong trading and cultural ties with much of the Iberian peninsular as well as Italy. The movement of still life painting which flourished in Madrid from the beginning of the 17th century did not establish itself in Valencia until the 1640s, chiefly through the work of Tomás Hiepes. Relatively little is known about the artist due to the lack of extant archives and documentation, however his high reputation and prolific and highly varied oeuvre was noted during his own lifetime by the contemporary chronicler Marco Antonio Ortí. The principal source on the artist's life however comes from the 18th century biographer Marco Antonio Orellana, who rebuked Palomino for omiting Hiepes from his Lives of the Eminent Spanish Painters and Sculptors, and in his Biografía pictórica valenciana o Vida de los pintores arquitectos, escultores y grabadores valencianos (Orellana, edition 1967, pp. 221-22) wrote:

The present work belongs to Hiepes' early maturity, during the first half of the 1640s. The style and overall conception of the painting can be compared closely to a Bodegón de Postres y Flores in the Arango Collection, Madrid (see Thomas Yepes, exhibition catalogue, Fundación Bancaja, Madrid, 26 September - 26 November 1995, pp. 44-45, cat. no. 4, reproduced). The Arango picture includes an arrangement of similar sweets and sugared fruits to the present work (although presented in a wicker basket rather than the silver and gilt dish in our picture) as well as the same motif of the búcaro (or water bowl) placed on a gilded tazza, depicted in the right foreground of the present work. The Arango picture has been convincingly dated to circa 1642 on the basis of its stylistic and compositional similarities with two magnicient still lifes by Hiepes, both signed and dated 1642, in the Naseiro Collection, Madrid (see op. cit., pp. 38 - 41, cat. nos. 1 and 2, reproduced), which are the earliest known securely dated works by the Valencian master. The other principal representations of sweets and pastries belonging to this period are the Bodegón de Dulces y Frutos Secos, also in the Arango Collection (op. cit., pp. 42-43, cat. no. 3, reproduced) and the Bodegón de Dulces, also in the Naseiro Collection (op. cit., pp. 46-47, cat. no. 5, reproduced).

The composition of the present work is entirely in keeping with the creations of Hiepes' early period, which are characterised by a balanced and symetrical configuration of objects, placed within a coherent spatial setting. In the present work the artist has arranged the objects on two planes, with the elegant glass vase and fountain providing the pivotal point of the composition, flanked symmetrically by the manises honey jar and the stack of sweet boxes, with the larger plate of sugared fruits and sweets on the left of the scene balanced by the búcaro and tazza, which have been edged forward to compensate for their smaller dimensions. The objects are illuminated against a black background with the light falling from the left side of the composition, which casts a shadow across the surface of the objects (most evident in the stack of boxes and foreground objects) defining their differing textures and forms. The slightly raised viewpoint adopted by the artist, like the works of Van der Hamen and the great Flemish still life painters before, affords the viewer a close inspection of the objects on display.

Much can be said of the selection of objects within the scene. The manises jar on the left, designed almost certainly for the storage of honey, was produced locally in Valencia and its depiction within the artist's paintings (of which this must be one of the earliest examples) would become something of a hallmark of his work. The beautiful glass vase and fountain appears to be the only representation within the entire artist's oeuvre of such an object, which is more commonly to be found (although normally in terracotta or structures of sea shells) within the still lifes of Juan de Espinosa (see, for example, two paintings from private collections, reproduced in P. Cherry, Arte y Naturaleza, Madrid 1999, plates LVI and LVII). The delightful stack of wooden boxes (which were designed to store quince and other sweets) represents, in some respects, hommage to the leading Madrileñan still life painter of the previous generation, Juan van der Hamen y León, in whose work they often feature (see, for example, his painting, signed and dated 1621, in the Museo de Bellas Artes, Granada; reproduced op. cit., plate XXXIV). It is typical of the invention of Hiepes however that he has entended Van der Hamen's motif by including as many as four levels of boxes, and in characteristic style he has left the lid of the top box slightly ajar to entice the inquisitive nature of the viewer. The large pyramid of sugared fruits, turrones, pastries and sweets in the left foreground of the scene were a favourite subject for depiction by Hiepes, almost certainly on account of the fact that his sister, Vicenta, owned a confectionery in Valencia itself. Perhaps the most intriguing object within the overall scene however is the búcaro, depicted upon a gilt tazza in the lower right corner, which was a small bowl made from earth designed for drinking water, its properties giving the water itself a sweet and pleasant flavouring. These everyday objects originated from Portugal and Extremadura but were subsequently produced more locally in Talavera, as well as imported in vast quantities from Mexico. There appears to have been an entire culture built up around the use of búcaros, not least because they were said to possess narcotic qualities and, following consumption of the water, the imbiber would often chew on the vessel and quite often consume the entire object (for further information on the subject, see N. Seseña, 'El Búcaro de las Meninas', pp. 39 - 48, with reproductions). This rich array of everyday objects not only affords us a fascinating insight into contemporary life, but the overall depiction represents one of the most beautiful Valencian bodegones of the 17th century.

We are grateful to Dr. Peter Cherry for confirming the attribution to Tomás Hiepes, following first hand inspection, and for proposing a date of execution during the first half of the 1640s (written communication, 25 July 2004). The attribution has also been confirmed by Ira Opperman, who will be including the work in her forthcoming doctoral thesis entitled Los Bodegones españoles del siglo XVII en el contexto europeo.