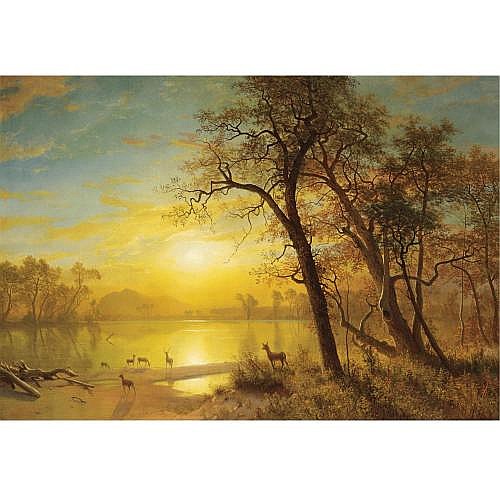 SOLD FOR THE BENEFIT OF THE MUSEUM OF FINE ARTS, HOUSTON
Albert Bierstadt?s dramatic views of the majestic American West earned him broad popularity as one of America?s most distinguished artists of the mid-nineteenth century. Bierstadt was overwhelmed by the natural splendor of America?s western landscape and, beginning in 1859, he returned there many times, visiting the territories of Yosemite, the High Sierras and Yellowstone and finding inspiration in the magnificent views of a spectacular and unspoiled wilderness. Bierstadt was not the first artist to make a journey West but he was probably the greatest American painter to fully capture the grandeur of the landscape and to record the many moods of its climate and terrain. By 1864, influential critics such as James Jackson Jarvis had duly acknowledged his position as one of the finest landscapists of the day, suggesting that he had surpassed Frederic Church in skill and accomplishment. Gordon Hendricks wrote, ??his successes envelop us with the beauty of nature, its sunlight, its greenness, its mists, its subtle shades, its marvelous freshness. When he succeeded in what he was trying to do-to pass along some of his own passion for the wilderness and beauty of the new West-he was as good as any landscapist in the history of American art? (Albert Bierstadt, Painter of the American West, New York, 1971, p.10). Bierstadt?s idealized interpretations of the western landscape helped create and bring to life the image of the fabled frontier for many who would never travel there. His paintings were highly sought-after by patrons willing to pay record prices for his spectacular canvases. Edgar P. Richardson commented, ?Bierstadt was one -and one of the best- of those who discovered the grandeur of the American West and made our nation aware of it? (Painting in America, New York, 1956, p. 230). Bierstadt?s eastern audience was often stunned by the majesty of his subjects. Linda Ferber notes, ?Bierstadt effectively appropriated the American West, tapping public curiosity and excitement about these remote national territories. This interest was fueled, even during the apprehensive years of the Civil War, by the powerful idea of Manifest Destiny. The prevalent belief that Americans were divinely ordained masters of the continent lent special significance to Bierstadt?s choice of subjects" (Albert Bierstadt: Art and Enterprise, Brooklyn, New York, The Brooklyn Museum, 1991, p.25). The Civil War left many Americans distressed and questioning their traditional values. These grand views of the West seemed to provide their audience with a reconnection to the antebellum era and instill an opportunity for renewal. Bierstadt?s dramatic scenes provided an escape from the harsh realities of the recent national conflict and the ensuing bitterness of reconstruction. In Mountain Lake an intense morning sun is suspended in the center of the scene, suffusing a golden light over the still surface of the lake. It is a scene infused with a sense of the ideal and a representation not only of the dawning of a new day but also the beginning of a new era of peace in post Civil War America . Only a small group of deer, alert, delicate and small against this mighty sight are present to witness the phenomenon of the moment ? a landscape of absolute purity, a new Garden of Eden.