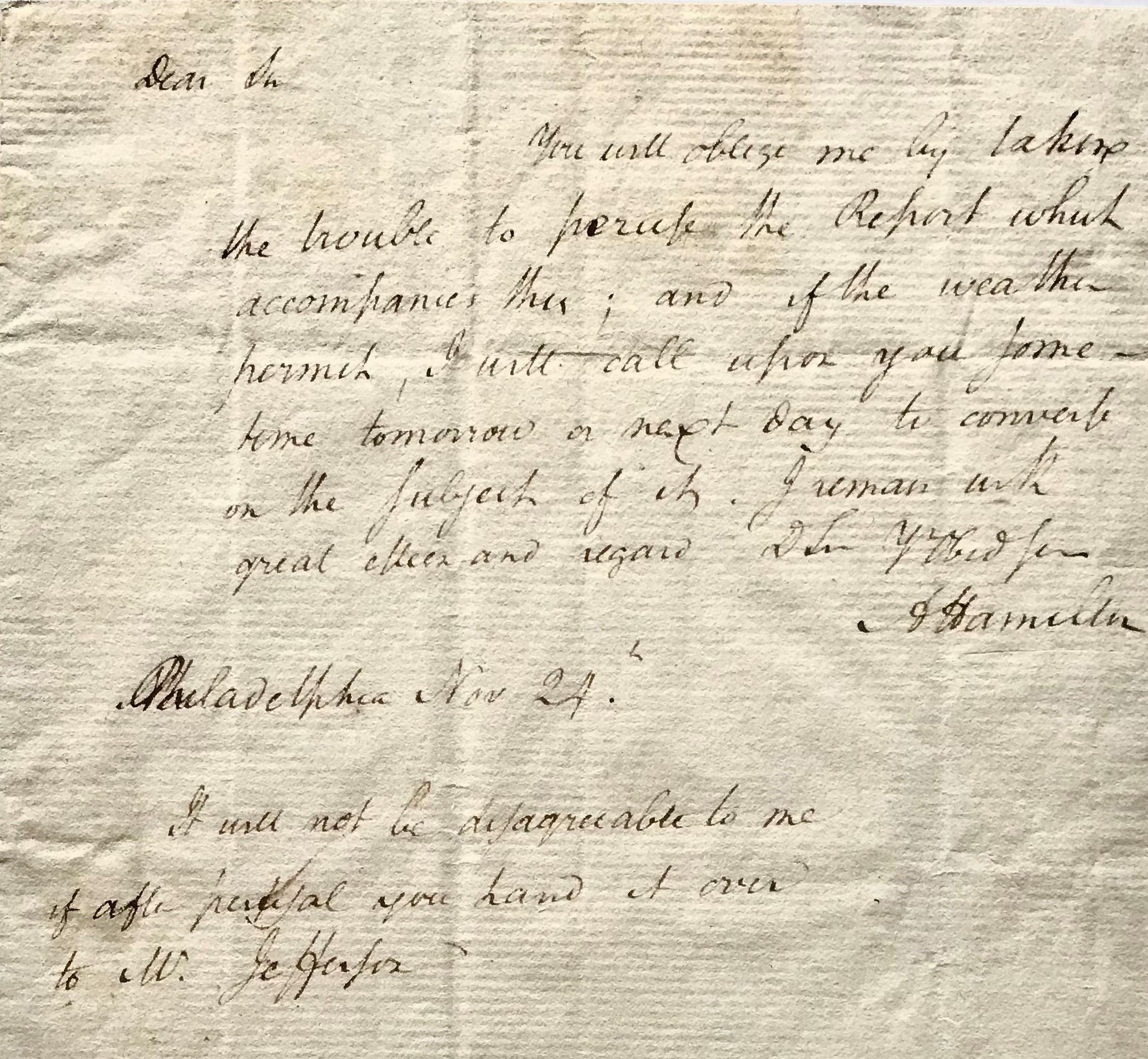 Unique 1790 Hamilton ALS to Madison Mentioning Jefferson: Only Letter Between the Two Ever to Appear at Auction, and Likely the Only One in Private Hands 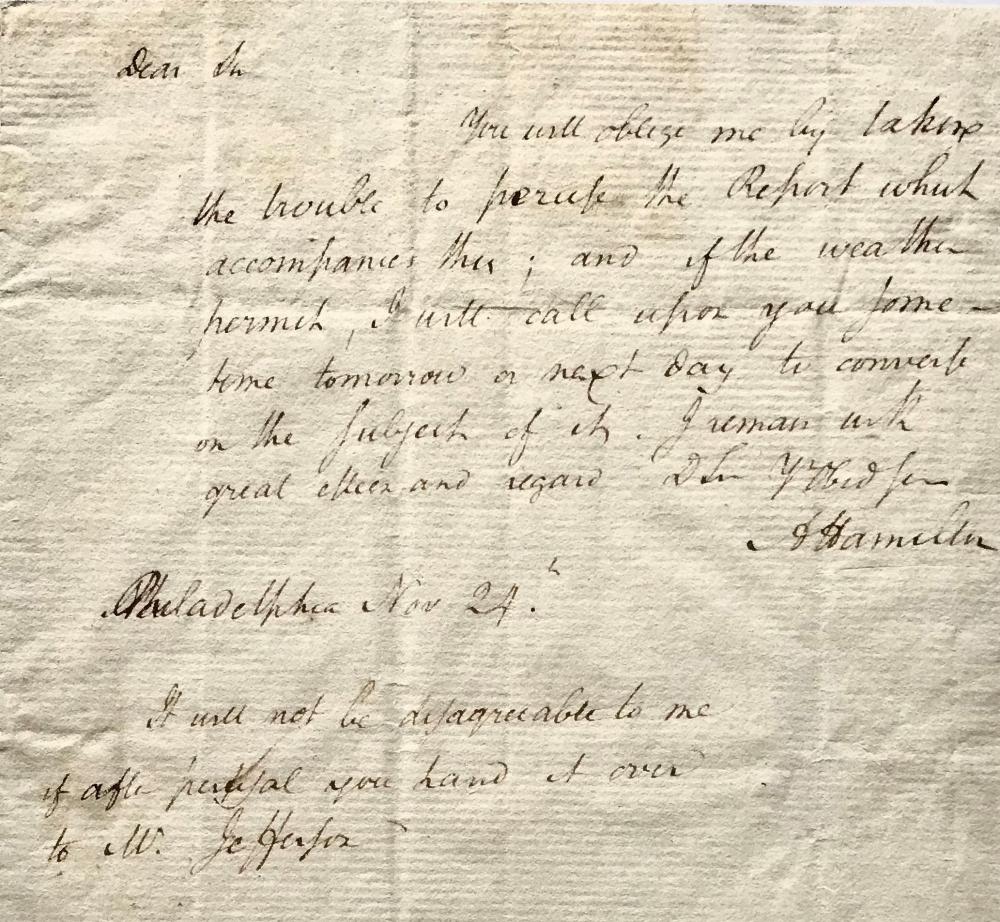 Lot 71: Unique 1790 Hamilton ALS to Madison Mentioning Jefferson: Only Letter Between the Two Ever to Appear at Auction, and Likely the Only One in Private Hands

HAMILTON, ALEXANDER. (1755-1804). American revolutionary, statesman and the nation’s first secretary of the treasury. ALS. (“A. Hamilton”). ¾p. 8vo. (5" x 7¼"). Philadelphia, November 24 [1790]. To JAMES MADISON (1751-1836), statesman, Founding Father, author of the Bill of Rights and fourth president of the United States. Hamilton and Madison were, of course, the principal authors of The Federalist Papers.

“You will oblige me by taking the trouble to peruse the report which accompanies this; and if the weather permit, I will call upon you sometime tomorrow or next day to converse on the subject of it. I remain with great esteem and regard D[ear] Sir Y[ou]r Obed[ient] Serv[ant]… It will not be disagreeable to me if after perusal you hand it over to Mr. Jefferson.”

An orphaned immigrant from the Caribbean colony of Nevis, Hamilton was involved in revolutionary politics while studying at King’s College, now New York City’s Columbia University. When the American Revolution closed the college’s doors, Hamilton enlisted in a militia, became a captain of artillery and joined General Washington’s staff as an aide-de-camp. After participating in the victory at Yorktown, he returned to his law studies and started his political career by representing New York in the Congress of the Confederation. During his tenure, he advocated, with Madison as his ally, for congressional power to collect taxes. As the country’s financial situation grew worse and mounting discontent among unpaid Continental soldiers threatened the nascent republic, Hamilton continued to advocate for a strong federal government until his resignation in 1783. A year later he founded the Bank of New York, and in 1787 he was chosen a New York delegate to the Constitutional Convention where he began, with Madison and John Jay, to write and publish a series of 85 essays collectively known as The Federalist Papers, which argued in favor of the Constitution’s ratification. Scholars believe that Hamilton authored 51 of the articles, Madison 29 and Jay the remaining five.

At the 1787 Constitutional Convention, James Madison proposed the so-called Virginia Plan, which included a bicameral congress and separate executive and judicial branches and became the blueprint for American democracy. His influence was immense, and Madison spoke hundreds of times during the convention while sitting on the committee that finalized the Constitution, ratified on June 21, 1788. In 1789, Madison drafted the Bill of Rights, consisting of the Constitution’s first ten amendments and approved in 1791.

After returning from revolutionary France where he had replaced Benjamin Franklin as chief minister to France, Thomas Jefferson (1743-1826) was asked by President Washington to become the country’s first secretary of state. It was in this office that Jefferson found himself at odds with Secretary of the Treasury Hamilton. Their ideological differences became, in fact, the basis for the first defined political parties in the U.S. – the Republicans and the Federalists.

After his September 1789 appointment to Washington’s cabinet, Hamilton moved quickly to organize the fledgling nation’s finances so that the central government assumed responsibility for such important functions as taxation, the issuance of public credit, and banking. In his “First Report on the Further Provision Necessary for Establishing Public Credit,” commissioned by the House of Representatives in September 1789, and presented the following January, Hamilton laid out his plan to establish public credit through the sale of bonds to pay off the states’ wartime expenses.

Jefferson opposed the plan because, in his view, “centralized government was simply European-style tyranny waiting to happen again. Influenced by his upbringing in agrarian Virginia, he dreamed of a society of property-owning farmers who controlled their destiny. While a manufacturing economy was driven by avarice, a republic resting on the yeoman farmer would keep ‘alive that sacred fire’ of personal liberty and virtue. Hamilton, of course, had risen meteorically in the world of urban commerce. Naturally, he believed that a flourishing merchant economy would sow opportunities for all. Further, it would produce a philanthropic, knowledgeable and enterprising people. Jefferson once equated cities with ‘great sores,’ but in Hamilton’s eyes they were focal points of societal health, providing a foundation for wealth creation, consumerism, the arts, innovation and enlightenment,” (“How the Rivalry between Thomas Jefferson and Alexander Hamilton Changed History,” Time, Ferling).

By the summer of 1790, the legislature was deadlocked over the matter when Hamilton, Jefferson and Madison held a series of secret meetings in New York City, the young nation’s capital, including a dinner “at Jefferson’s house on or around June 20, surely one of the most famous dinner parties in history,” (“The Compromise of 1790,” The William and Mary Quarterly, Cooke). The three men arrived at what became known as the Compromise of 1790, approved by the president, by which the nation’s capital would be moved to a location on the Potomac River and Hamilton’s plan that the federal government would assume the debts incurred by the states that had fought in the Revolutionary War, would be passed. The song “The Room Where It Happens” from the musical Hamilton (https://www.youtube.com/watch?v=WySzEXKUSZw) recounts these negotiations. On December 13, 1790, Hamilton submitted the final version of his “First Report on the Further Provision Necessary for Establishing Public Credit” to Congress (published: https://founders.archives.gov/documents/Hamilton/01-07-02-0227-0003), likely our letter’s enclosure. Hamilton followed this success with his “Second Report on Public Credit” which outlined his plan for a federal bank. Initially opposed on grounds that a banking monopoly was inconsistent with the nation’s ideals and that Congress could not issue corporate charters, his proposal finally bore fruit on February 25, 1791, with the creation of the Bank of the United States.

At the time of our letter, Madison represented Virginia in congress (1789 to 1793) and later served as secretary of state from 1801-1809 under President Jefferson, where he oversaw the Louisiana Purchase. Madison succeeded Jefferson as president and served two terms from 1809-1817.

Our letter is published in The Papers of James Madison, ed. Hobson and Rutland and at Founders Online, https://founders.archives.gov/documents/Madison/01-13-02-0224.

On a folded sheet and in fine condition. The address leaf is also written in Hamilton’s delicate hand, “The Honorable Mr. Madison.”

Request more information
Contact: Lion Heart Autographs
Auction: Hidden Away for Decades, Two Extraordinary Autograph Collections Are Now Back on the Market
Auction Date/Time: April 28, 2021
Lot 71: Unique 1790 Hamilton ALS to Madison Mentioning Jefferson: Only Letter Between the Two Ever to Appear at Auction, and Likely the Only One in Private Hands
Cancel

Hidden Away for Decades, Two Extraordinary Autograph Collections Are Now Back on the Market

Every autograph Lion Heart Autographs sells is unconditionally guaranteed authentic without time limit to the original purchaser. All sales are final unless an item is determined to be inauthentic or not as described. New York State residents pay applicable sales tax. Shipping charges are additional.

New York State residents are required to pay applicable sales tax. Customs and/or import fees are the responsibility of the buyer.