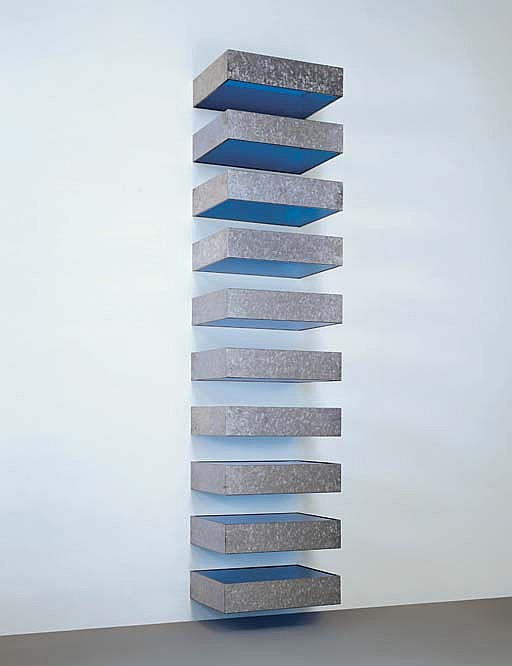 On occasion, Christie's has a direct financial interest in lots consigned for sale which may include guaranteeing a minimum price or making an advance to the consignor that is secured solely by consigned property. This is such a lot. This indicates both in cases where Christie's holds the financial interest on its own, and in cases where Christie's has financed all or a part of such interest through a third party. Such third parties generally benefit financially if a guaranteed lot is sold successfully and may incur a loss if the sale is not successful.
Ever the literalist, Donald Judd insisted on the intrinsic properties of materials. Toward this end, he repeated certain basic structures in his "non-compositions," that he renewed through the use of different materials. His "stacks" are no exception: a seminal version in galvanized iron was featured in his first one-man exhibition at Leo Castelli Gallery in 1966. Eleven years later, Judd reprised the structure for Untitled. The largest and most compelling of Judd's stacks, this work is comprised of 10 elements with ten-inch intervals. But while the work's ancestry is apparent, its singularity is ever more striking. Composed of clear blue plexiglas and galvanized iron, the work maintains the cool, minimalist aesthetic of the first "stacks" but expands upon their formal qualities with the interplay of light, texture and shadow.

In his influential definition of the "Specific Object," in a seminal essay of the same name from 1964, Judd described art as a three-dimensional object that occupied "real space." Eschewing the fictional illusionism of painting and the anthropomorphic tendencies of sculpture, he insisted upon non-referential structures that did not depend on anything beyond their own verifiable, empirical limits. "A shape, a volume, color, a surface is something itself," he stated; "it shouldn't be concealed as part of a fairly different whole" (D. Judd cited in B. Smith, Donald Judd: A Catalogue RaisonnÃ© of Paintings, Objects, and Wood-Blocks 1960-1974, exh. cat., National Gallery of Canada, 1975, p. 25). In addition, Judd dismissed notions of part-by-part composition in favor of the creation of unified gestalts. A singular object should bespeak nothing so much as its own existence; the viewer's experience with the work, in turn, was a dramatically phenomenological one.

Rectilinear constructs dovetailed neatly with Judd's theoretical positions. Mounted on the wall or placed directly on the floor, his boxes cut right angles in space, eliminated composition, and underscored nothing so much as their structure and materials. Horizontal progressions and vertical stacks adhere to readily apparent mathematical proportions and register as holistic structures, such as in the present work's 1:1 progression; extending across the room or from floor to ceiling, they assumed an architectural bearing to contend with the spatial demands of their surroundings.

Untitled is a classic example of Judd's work since the 1960s. Conforming to the arrangement of a 1:1 arithmetic progression, its shape and volume are predetermined according to stringent geometric criteria. The work's color and surface thereby acquire primary expressive potential. In other words, the experience and meaning of Untitled hinges entirely on the inherent properties of the materials themselves rather than on any private or subjective ruminations of the artist. For example, the shadows created by the translucent blue plexiglas that forms the top and bottom of each box registers a haunting visual memory against the matte gray galvanized iron surfaces of its sides.

The cast colored shadows of the present work veer toward dematerialization, in stark contrast to the industrial evocations of the original "stacks" of 1966. Although they share exact physical dimensions, the hard-edged, closed masses of galvanized iron possess an altogether different aesthetic than the light-filled openness of plexiglas of the present work. Allowing for internal visibility but also for the incorporation of external reflections and a melancholic blue "halo", the present work fuses with its surroundings in an unprecedented manner. As Judd intended, Untitled attests to the startling novelty that a minor variation in materials can produce; casting a tranquil light, it draws us into a meditation on its fundamental essence.