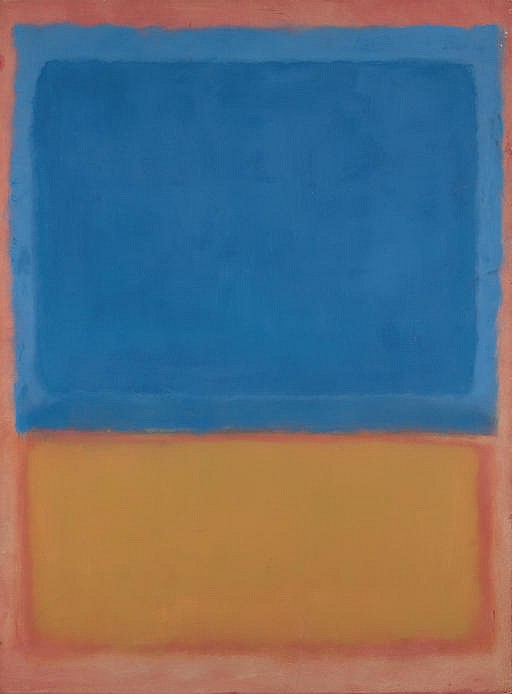 Marlborough A.G., Liechtenstein/Marlborough Gallery, London
Acquired from the above by the present owner

On occasion, Christie's has a direct financial interest in lots consigned for sale which may include guaranteeing a minimum price or making an advance to the consignor that is secured solely by consigned property. This is such a lot. This indicates both in cases where Christie's holds the financial interest on its own, and in cases where Christie's has financed all or a part of such interest through a third party. Such third parties generally benefit financially if a guaranteed lot is sold successfully and may incur a loss if the sale is not successful.
"If people want sacred experiences they will find them here. If they want profane experiences, they'll find them too. I take no sides" (M. Rothko, quoted in "Stand up Close" Newsweek , 23 January, 1961, p. 60).

Painted in 1955, Untitled (Red Blue and Orange) is a rich and exuberant painting belonging to the first years of Rothko's maturity - a period in which warm, joyous and sunny colors tend to predominate in the artist's work before slowly giving way to the more somber preponderance with red, blue and maroon that distinguished his later work. Asserting a bold and rare double-layering of a blue rectangle on another blue rectangular field of color above and orange one set against a warm reddish background, this bold and impressive painting establishes a mysterious and powerful sense of depth and resonance using, what at first glance seems to be, the very simplest of means.

Rothko once stated that he wanted his paintings to establish such a "presence" that "when you turned your back to the painting, you would feel that presence the way you feel the sun on your back" (M. Rothko, quoted in J. Breslin Mark Rothko: A Biography , Chicago 1993, p. 275). This kind of presence is established in works like Untitled (Red Blue and Orange) where Rothko's radiant rectangular fields of color resonate against one another with such monolithic power that, like the colorful geometric clouds casting shadows over a landscape, they seem to determine and manipulate the mood and emotions of the viewer enveloped by them.

For Rothko, who wanted the viewers of his paintings to stand close to his work and immerse themselves within them, this direct experience of a work of art by immersion was a fundamental part of his intention when he made them. Part of a generation that, in the aftermath of the horrors of the Second World War, sought an art rooted in fundamental human values, Rothko sought to commune with a universal humanness that he believed, particularly in the aftermath of the war, was under threat from the modern world. The abandonment of all figurative realism, all objective reality and the reliance upon color, form, scale and a sense of space alone to express his own deep feelings was all a part of this deep-rooted desire to reach out to and communicate directly and on a very basic level with what he believed to be a universal humanity. Towards this end, Rothko fell back on the example set by the ancients. "The known myths of antiquity" he wrote "are the eternal symbols upon which we must fall back to express basic psychological ideas... Modern psychology finds them persisting still in our dreams, our vernacular, and our art, for all the changes in the outward condition of life...The myth holds us, therefore not thru (sic) the possibilities of fantasy, but because it expresses to us something real and existing in ourselves" (M. Rothko, "The Portrait of the Modern Artist" in Art in New York , a program on WYNC, New York, quoted in M. Tuchman, New York School: The First Generation , Greenwich, 1971, p. 139).

Like myths, the mature paintings that Rothko painted between 1951 and 1970 are a deliberate attempt to penetrate the consciousness of the viewer and speak directly through the emotions to this "something real" existing in all of us. The sublime nature of these powerful and often deeply moving works can only be fully understood through a direct experience with the work itself. The scale of the painting in proportion to the viewer whose vertical presence in front of the evocative horizontals of Rothko's color establishes its own dialogue with the picture, creates a communion between painting and viewer that is probably unique and different for each person. Rothko's paintings are not "pictures of an experience" he famously asserted, they are "an experience."

Pulverising all elements (and more importantly, all recognizable objects) that stood in the way of such a direct experience, and favoring what he called "the simple expression of the complex thought," Rothko sought in paintings like Untitled (Red Blue and Orange ) to express a single, profound and simple truth. His genius Robert Motherwell once pertinently observed, "was that out of color, he created a language of feeling" (R. Motherwell, quoted in D. Ashton, About Rothko , New York, 1983, p.139).

In an early proclamation written in conjunction with Adolph Gottlieb and Barnett Newman, Rothko had asserted: "we are for the large shape because it has the impact of the unequivocal. We wish to reassert the picture plane. We are for flat forms because they destroy illusion and reveal truth," (Letter from Adolph Gottlieb and Mark Rothko published in The New York Times , 13 June 1943, partially drafted by Barnett Newman). Their aim was to establish a pure and direct art eliminating "all obstacles between the painter and the idea and between the idea and the observer" -- a kind of painting that embodied what Rothko called the simple "tragic idea." Towards this end, and in the same way that he had witnessed children doing during his twenty two years teaching them in Brooklyn's Center Academy, Rothko "horrified" the two fundamental elements of picture making -- space and color -- establishing them, and only them, as the sole protagonists of his work.

In doing this. Rothko, was following in the Romantic tradition of painting, creating, an overwhelming material presence that clearly invoked notions of both the void and of the sublime. Speaking directly to the individual through the void and mysticism of the horizon -- that sacred place where two or more contrasting elements (earth, air, water,) meet in the eye and consciousness of the viewer -- Rothko's paintings, as Robert Rosenblum once showed, become Caspar David Friedrich's Monk by the Sea but without the monk. The Monk, as a symbol of the spiritual man, is essentially replaced in Rothko's work, by the viewer.

The other great Romantic influence for Rothko was the philosophy of Friedrich Nietzsche and in particular his first thesis on The Birth of Tragedy . This was a work that Rothko recognized had had such a profound effect on him and his art that throughout much of the period when Untitled (Red Blue and Orange) was being painted, the artist was engaged in preparing notes for an essay or lecture to be given on the subject of Nietzsche's book and its importance for him.

Throughout his life Rothko had read and reread The Birth of Tragedy repeatedly seeing in it what he described as "the way in which I could achieve the greatest intensity of the tragic irreconcilability of the basic violence which lies at the bottom of human existence and the daily life which must deal with it." In this remarkable "fable" Rothko declared that he had found "the poetic reinforcement for what I inevitably knew was my inevitable course: that the poignancy of art in my life lay in its Dionysian content, and that the nobility, the largeness and exaltation are hollow pillars, not to be trusted, unless they have as their core, unless they are filled to the point of bulging, by the wild" (M. Rothko: a draft of a proposed lecture on the relationship between his work an Nietzsche's The Birth of Tragedy , 1955 quoted in E. Breslin, Ibid , p. 357-358).

Like all of Rothko's mature paintings Untitled (Red Blue and Orange) is, a Dionysian play of emotive color -- a "drama" as Rothko called it -- that through its simplicity, directness and the establishment of a tense equilibrium, expresses a psychological reality that communicates itself unconsciously to the human psyche. For Rothko this resonance derived from the duality inherent within all human nature which Nietzsche had identified and classified as being either Apollonian or Dionysian. The Apollonian force represents the act of becoming, of defining and measuring, it is the force of the sculptural arts, of geometry and of universal order. The Dionysian aspect represents the opposite, unstable and wild, it characterizes passion, the musical arts, and the forces of disintegration and chaos. Greek tragedy, Nietzsche noted, played on this inherent duality in the human psyche and merged them into an eternally conflicting but united whole. Rothko, who seems to have personally felt very acutely the same conflict and divisions within his own persona, sought to express this same sense of wild Dionysian force contained and shaped into a human scale in the powerful and resonant balance of his paintings. Consisting, as in Untitled (Red Blue and Orange) , of essentially two rectangles of color vying for predominance within a third, set by the "frame" of the canvas itself, a powerful elemental force, suggested by the radiating energy and feathery edges of Rothko's brushwork, is restrained and held into a dynamic state of equilibrium by the careful balance of the whole work's proportion and scale. "This kind of design may look simple" Rothko once said, "but it usually takes me many hours to get the proportions and colors just right. Everything has to lock together. I guess I am pretty much a plumber at heart" (M. Rothko, quoted in J. Fischer, "The Easy Chair: Mark Rothko, Portrait of the Artist as an Angry Man," 1970 reproduced in M Lopez-Ramiro, ed., Mark Rothko: Writings on Art , New Haven 2005, p. 133).

Because of this refined use of scale and proportion, Rothko's paintings become heavy with a sense of human passion and emotion, evocative of different moods forced into conjunction with one another and pressurized into a dynamic and sometime dissonant coexistence. Rothko himself again summed up this timeless quality of his work in terms of the ancient art of the theatre, writing, "I think of my pictures as dramas, the shapes in the pictures are the performers. They have been created from the need for a group of actors who are able to move dramatically without embarrassment and execute gestures without shame. Neither the action nor the actors can be anticipated, or described in advance. They begin as an unknown adventure in an unknown space. It is at the moment of completion that in a flash of recognition, they are seen to have the quantity and function which was intended. Ideas and plans that existed in the mind at the start were simply the doorway through which one left the world in which they occur" (M. Rothko "The Romantics were Prompted" published in Possibilities , No. 1, Winter 1947-48).