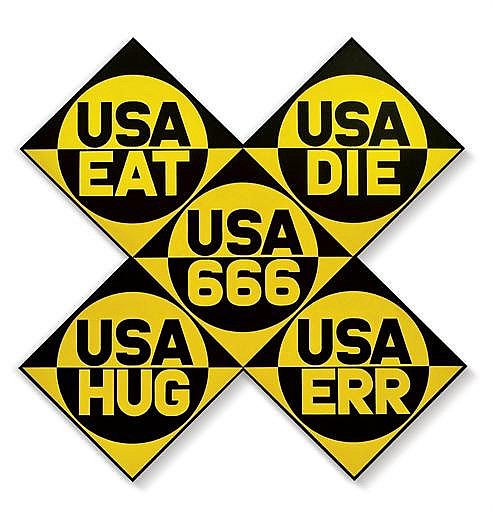 This work will be included in the forthcoming Robert Indiana catalogue raisonnÃ©.

Acquired from the artist by the present owner

To catch a glimpse of this self professed American painter of signs, one must make their way through a coded universe built up from a variety of references and reflections. Executed between 1965 and 1966, USA 666 (The Sixth American Dream) is a major example of Robert Indiana's early work and the only one from the 1960s remaining in private hands. A recurrent theme within his oeuvre, the suite of American Dream paintings references the very notion of a society that offers individuals the opportunity to prosper without limits. Beginning with the American landscape, and the roots, which Indiana acknowledges clearly, "the images he evokes are sentimental ones, sensitive or sensual, and exist as segments, like those images from childhood that fluctuate between dream and memory" (G. Perlain, Musee D'art Contemporain, Nice, 2000, p.14). More than mere geographical facts, these roots develop from an emotional culture, a world lived and a world projected.

Distinguishing himself from his Pop peers, in the early sixties Indiana chose to concentrate on the more abstract commercial signs than to those of mass media. Fascinated by the highway signs he observed from his childhood, roadside commerce became part of his basic vocabulary along with the four words, EAT, HUG, ERR, and DIE (his definition of the American Dream). "These words signify a voyage in which intimacy, love, pleasure and danger and death in so many lives, as on the highway are leveled by repetition and reduced to non-experience. Love, intimacy and perhaps all human relationships become HUG, sin ERR. Eat equals DIE in an equation he spelling out in his EAT/DIE 1962 painting. Optimism and naiveti are in these paintings only as they reflect the naiveti of the lives he thus circumscribes" (J. McCoubrey, ex.cat, Institute of Contemporary Art of the University of Pennsylvania, Philadelphia, p.25).

Beginning his series of American Dreams in 1960, which he numbered 1 through 9, Indiana completed these paintings over several decades. With their rotating, repetitive infrastructures, the Dreams (as referred to by the artist) reflect "Steinian imagery: kaleidoscopic circles, and, short concrete words and numbers," (S. Ryan, Robert Indiana: Figures of Speech, New Haven and London, p.128) and all contain multiple signifiers of his adoptive parents. Subsequent to his first American Dream, which curator Alfred Barr, Jr., called "spellbinding," Indiana highlighted the true landscape of American life in his dreams 2 through 6. Incorporating a distinctive shape of canvas, the 5 diamond panels of USA 666 create an equal-armed cross symbolic of the X motif of the circular railroad-crossing caution sign. This format also seen in Indiana's X-5 (the second part of the Fifth American Dream), is unique to the 5th and 6th American Dreams. Painted in black and yellow, emblematic of the warning signs seen on the highway, indicate a change in the journey ahead. With its unsettling optical illusion, USA 666 is separated by time and consistency of detail from the other dreams. An autobiographical and deeply personal painting, this piece is rendered more explicit because it is the only dream for which Indiana wrote an explanation for.

Part of Indiana's so called "road literature," USA 666 exists in two versions, one red and green, the original colors of Phillips 66(the company his father worked for), and this piece painted first, in yellow and black, the colors associated with the yield sign and other cautionary road signs. "If it's a subject I feel intensely about then it will mostly certainly contain the color black" (R. Indiana quoted in S. Ryan, Robert Indiana: Figures of Speech, New Haven and London, p.128). Combining the saturated stark color black with bright yellow Indiana once wrote, "Yellow is my color, especially in its darker form. Expansive and ardent, yellow is a male color, at the edge of blackness in its relation to sulfur."

Nicknamed a "father painting," by Indiana USA 666 was initially begun in 1965, and completed following the death of his adoptive father Earl Clarke. Each panel of the USA 666 has a bi-level message. In the center of this work in a circular form, a reference to movement and the wheels of an automobile (a significant subject for Indiana and a true emblem of the American Dream), USA (the place of the American Dream) is paired with the number 666. A direct reference to Earl, who was born in the sixth month, June, Indiana also recalls the Phillips 66 sign and the famous highway leading to the West (Route 66), by which Earl abandoned his mother and himself. Combined with the four key words, EAT, DIE, HUG, and ERR, Indiana presents the cycle of life in the American Dream. Like the Demuth American Dream # 5, USA 666 does not have a central void that can be seen in the other dream paintings.

Indiana's 'sign' paintings of the sixties, though often grouped together with Pop art, refer to an entirely different order of reality from the commodity orientated genre. Transmitting something more intellectual and psychological, his work requires a different mode of looking than does the satiny photographic realism of Rosenquist's canvases or the commodity and media graphics of Warhol. The closest Indiana comes to Pop art, his dream paintings are like "Pop poetry of highway culture."(L. Alloway, 'Highway Culture: Man at the Wheel' Arts Magazine, 41, no.4, February 1967, pp.28-33) But these paintings, such as USA 666 are self-involved poetry, the word's meanings are fractured, shifting, and vastly over determined. They represent Indiana's own mobile childhood, the interminable moves and auto trips in cars more familiar than homes, driven by one or both parents. With a magnetic charge, USA 666 dazzles with its color and formal clarity.