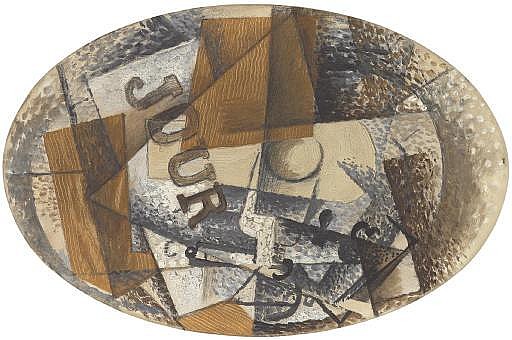 On occasion, Christie's has a direct financial interest in lots consigned for sale which may include guaranteeing a minimum price or making an advance to the consignor that is secured solely by consigned property. This is such a lot. This indicates both in cases where Christie's holds the financial interest on its own, and in cases where Christie's has financed all or a part of such interest through a third party. Such third parties generally benefit financially if a guaranteed lot is sold successfully and may incur a loss if the sale is not successful.
The cubist paintings of Braque and Picasso instigated the most far-reaching and revolutionary reassessment of spatial conventions in Western art since the development of perspective during the Renaissance. The two artists likened themselves to a pair of mountain climbers roped to each other by their safety line, or the pioneer aviators Orville and Wilbur Wright--Picasso was fond of addressing Braque as "Wilbourg," and Braque occasionally signed himself as such in letters to his dealer Kahnweiler. Their quest seemed no less audacious, for they sought to upend and supplant all prior values and priorities concerning visual perception and pictorial illusion. Braque later told John Richardson:

"The whole Renaissance tradition is repugnant to me. The hard-and-fast rules of perspective which it succeeded in imposing on art were a ghastly mistake which it has taken four centuries to redress; Cézanne and after him, Picasso and myself can take a lot of the credit for this. Scientific perspective is nothing but eye-fooling illusionism; it is simply a trick--a bad trick--which makes it impossible for artists to convey a full experience of space, since it forces the objects in a picture to disappear away from the beholder instead of bringing them within his reach, as painting should. Perspective is too mechanical to allow one to take full possession of things. It has its origins in a single viewpoint and never gets away from it...When we arrived at this conclusion, everything changed--you have no idea how much" (quoted in J. Richardson, Braque, London, 1961, p.10).

The still-life proved to be the most effective genre in spearheading their efforts--it was from the outset the cubist subject par excellence. Braque and Picasso realized their radical aims in subjects unaccompanied by either fanfare or drama, for they brought to the table the most humble and familiar of everyday objects. Braque incorporates within the present painting a handful of these ordinary elements: a short-stemmed glass, a pipe (seen just below and to the right of the glass), a carafe (lying horizontally), and the nameplate of a folded Paris newspaper, Le Journal. The oval format of the stretched canvas reproduces the top of a typical café pedestal table, as viewed from a high angle. Braque remarked that it was his "usual desire to get as near the reality of things as possible" (quoted in ibid., plate 13). This composition evokes an entirely mundane and real part of the artist's daily routine, in which he would sit at a table in his favorite café, while reading the daily paper and enjoying an apéritif and a smoke. Karen Wilkin has observed that "Braque turns the commonplace, by now predictable iconography of the cubist studio into some of the most elegant, intelligent painting of the twentieth century" (in Georges Braque, New York, 1991, p. 58).

Both Braque and Picasso had been using oval-shaped canvases since 1910. Isabelle Monod-Fontaine has noted that "the real support of the objects making up the still life is transposed into the particular format of these works. The tondo or oval shape permits the viewer concretely to experience the tactile space intended by the painter, the proximity of the assembled objects. Better, in any case, than the more abstract 'window' formed by the traditional rectangular frame" (in Georges Braque: Order & Emotion, exh. cat., Goulandris Foundation, Andros, Greece, 2003, pp. 21-22). Both artists had noticed that presence of corners in the conventional rectangular canvas was especially problematic in still-life painting. The definition of space becomes ambiguous in these outlying areas, a situation that the corner-less tondo remedied, allowing the painter to create a compact space around the subject, and to concentrate more closely on the still-life objects themselves. The oval shape moreover served as a foil to the rectilinear cubist grid within the composition. Braque stated, "The point of my oval compositions was that they allowed me to rediscover the contrast between horizontals and verticals" (quoted in J. Richardson, op. cit., plate 11).

Its modestly scaled format notwithstanding, Braque recapitulates in Verre et pipe, JOUR many of the astonishing innovations that he and Picasso had introduced into painting during the past four years of their "rope climbing party." Braque, in fact, led the way in many instances. His father had been a house-painter and contractor, and as Braque grew up he learned many of the decorative skills of the trade, which he now adapted for his revisionist assault with Picasso on the conventions of "high" art. In 1910 Braque included a trompe-l'oeil rendering of a nail in several compositions, by which he created the playful illusion of having nailed the canvas to the wall. In the same year he introduced stenciled and hand-drawn lettering into his paintings (seen here as well, four years later) and thereafter both he and Picasso frequently employed words, letters and numbers as active pictorial elements. Richardson has noted "Braque's refusal to be bound by convention in his handling of artist's materials, which resulted in his exploitation of unorthodox paint-surfaces and a new kind to tactile values" (in Braque, Milan, 1961, p. 8). He employed a house painter's comb to rake the surface of paint film in order to simulate a wood-grain surface. He added sand to his oil colors. Braque felt the strong need to ground himself in reality as he and his colleague dismantled the spatial framework that painting had long since taken for granted, to avoid the tendency to abstraction, which had become real possibility during the hermetic phase of analytic Cubism in 1912. The use of such real elements, which he called "certainties," played a major role in establishing the painting as a tableau-objet, a fabrication that perched daringly on the very boundary between painting and reality, and, as the artists claimed, was entirely concrete and real in its own right.

The importation of letters and imitation surfaces into the painted composition inspired Picasso to take the next step. In May 1912, he pasted an oil cloth printed with a chair-caning pattern on to a canvas, and then painted around and partly over it. It functioned as both ground (as if the oval canvas were the seat of a chair on which the still-life elements had been placed) and an integral pictorial element in the composition (Zervos, vol. 2*, no. 294; fig. 1). This was the first collage. Braque's Verre et pipe, JOUR is perhaps in part a homage to this groundbreaking work; it incorporates many of the same elements, including a prominent fragment of the Le Journal banner. In the place of Picasso's printed chair-caning, however, Braque substituted a painted rendering of his own favorite collage element, a printed wood-grain wallpaper. During the late summer of 1912 both artists were working in Sorgues. Braque spied a roll of faux-bois (imitation oak-grain) wallpaper in a decorating shop window while visiting nearby Avignon. As if to get the jump on Picasso for his next innovation, Braque waited for his friend to make a brief trip back to Paris in early September, then purchased the wallpaper. With pieces he cut from the roll he proceeded to make the first papier collés (fig. 2).

It was only a short time before both artists 'reversed' the process of collage, by rendering a painted simulation of the cut paper shape, which itself was often a printed substitute for the real thing. Verre et pipe, JOUR demonstrates how this unfolding and self-reflexive process of representation had come full circle: the wood grain elements in this painting have the appearance of the rectilinear shapes of the cut pieces of faux-bois wallpaper that Braque had been inserting his papier collés, but here they have been created once again with the graining comb and oil paint. The presence of the letters 'JOUR' underscores the whimsical visual punning that often enriches the subtext of Braque's and Picasso's most engaging cubist works. Apart from its reference to their favorite daily newspaper, JOUR signifies the time frame of le jour, "the day," placing the work squarely in the reality of the here and now, and also suggests jouer ("to play"), that is, their enjoyment of clever games in which the shorthand signs they devised for objects become the stuff of visual punning, setting up a witty interplay between the concretely real and the artificially pictorial.

Verre et pipe, JOUR is the only composition that Braque painted in 1913-1914 that contains a prominent triangular form within the oval perimeter of the canvas. This painting appears to be closely related to Braque's sole documented paper sculpture (fig. 3), which is today known only from a photograph taken in Braque's studio at the Hôtel Roma, 101, rue Calincourt in Montmartre, sometime after 18 February 1914. Braque had been making paper sculptures since 1912, and in 1914 Kahnweiler reported seeing in Braque's studio a number of "reliefs in wood, in paper or in cardboard" (quoted in W. Rubin, Picasso and Braque: Pioneering Cubism, exh. cat., The Museum of Modern Art, New York, 1989, p. 34). Unlike Picasso, who boxed up and stored away his now famous paper guitars and other cubist constructions, Braque did not preserve his fragile paper sculptures. The still-life corner relief in the photograph is believed to have been done in early 1914. This work shares several elements with Verre et pipe, JOUR--the newspaper and glass, with a bottle in the place of the carafe-like shape--all of which have been likewise centered on a triangular platform. One can only speculate which came first, but it seems likely that the present painting was probably done around the same time as the paper construction, in late 1913 or by early 1914. Kahnweiler's archives show that the painting entered his inventory in 1914.

Braque executed only another two dozen paintings (e.g., Romilly and Laude, no. 239; fig. 3) and papier collés in 1914, before he was mobilized for military service in early August following the outbreak of the First World War. As a foreign national from a neutral country, Picasso was not obliged to don a uniform, and he continued painting while his friend, his "pardner" or "pard," as he called him, could not. These events marked the end of an era for Braque, when he was at the height of his powers. He did not resume painting until 1917, having suffered a grievous head wound which required trepanation and nearly two years of convalescence. When Braque and André Derain, another good friend, boarded the train in Avignon in August 1914 to return to Paris and serve their country, Picasso lamented, "I never saw them again." Of course, he did encounter them again, but the camaraderie and mutually stimulating dialogue of the halcyon days of pre-war Cubism were now only memories, and come what may, life and art would never be the same.

(A - ARTIST PHOTO -- UNNUMBERED FIG)
Braque standing on the terrace of his studio at the Hôtel Roma in Montmartre, 1913. Photograph courtesy of the Archives Laurens. BARCODE 26015309