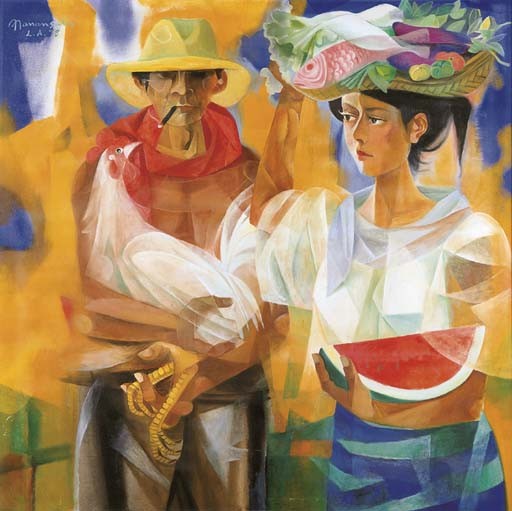 Gift from the artist to the present owner who is the niece of the artist.

THE PROPERTY OF A LADY, LOS ANGELES

"Picasso painted Les Demoiselles d'Avignon in 1907, three years before Manansala was born. It took another thirty-nine years before Manansala had a meaningful encounter with the revolutionary style. Cubism then became the generating force of Manansala's mature works, the stylistic centre of his main oeuvres. It was not a master-follower relationship - it was more like extending the premises of a tradition. Cubism did not curtail the dimension of Manansala's vision. He enriched the style and gave it a new sense of place." (Rodolfo Paras-Perez, Manansala, Plc Publications, Manila, 1980, p. 75).

It is no doubt that cubism freed Manansala's vision from the genre tradition of direct transcription of nature as well as the supremacy of emotion of Abstract-Expressionism. It provided the artist with a visual idiom to continue working in the figuration mode, articulating new ways to record the Filipino images such as the Jeepneys, Barong-Barong, Sabungero and the Luksong-Tinik as the present lot, which is a popular game for the Filipino children were amongst the artist's favourite subjects.

It is apt to say that the artist 'idigenised' cubism in the Philippines. Folk or common everyday subjects, like the Luksong-Tinik were reconstructed utilizing an adapted form of cubism when images were transposed into geometric multi-faceted forms on continually shifting and overlapping planes. For Manansala, cubism did not necessitate a complete disfiguration, in place was a respect for the integrity of the natural forms of the subjects only to be viewed from pluralistic perspectives.

Equally important was the artist's link between his brand of cubism and his facility in watercolour. One of the best watercolourist in the Philippines after Carlos Francisco, Manansala has adapted the transparent quality of the medium to his oil works thus creating a branch of 'Transparent Cubism' uniquely associated with his works.

Dated in 1978, the present work was painted at the height of his 'cubist maturity', after his experimentation with the Stained Glass, Whirr, Shibui and Chromatic series. It is a work that embodies a few essential elements of the artist's various stages. Clearly rendered in the cubist tendency, this Market vendors nevertheless has a more cohesive composition and with clearer defining lines of the figures than Manansala's Vendors of 1967 in which the artist broke up the defining lines and make it less obvious and he comments on this earlier work "I wanted to show the bones and get away with it" (Ibid., p. 109).

With the present lot, the quality of translucency comes through clearly with the artist's careful manipulation of the colours and forms. "I used bright colours and geometric shapes to create a melody" (Ibid., 187) claims the artist. In the light of this statement, the glistening quality of the present lot seems to date back to the artist's earlier attempt of the Stained glass series when colours took up much primacy as never before in his works and this fascination was translated into his play with the rich schism of colours which he re-created in forms and shapes in the series. With the present work, one sees that colours are richly applied and the graduation of shades are times camouflaged with the shifting of forms and at times make apparent with a clear dissection of spatial space.

For Manansala the subject matter of a market vendors hold a close place in his heart just as those of mother and child and still life. It is observed that "Subject matter still hewed closely to well remembered things or scenes - an arrangement of mangoes and suman, or the ingredients for sinigang: fish, tamarind, the heart of a banana; or scenes from his pastoral world - the cockfight, vendors on their way to the market, or the traditional mother and child theme in a new context. With the ineffable persistence of Proust's recovery of things past, Manansala's imagery took on the archetypal presence of forms reduced to their essences - free from time and also, freely reconstituted in space." (Ibid., p 87).