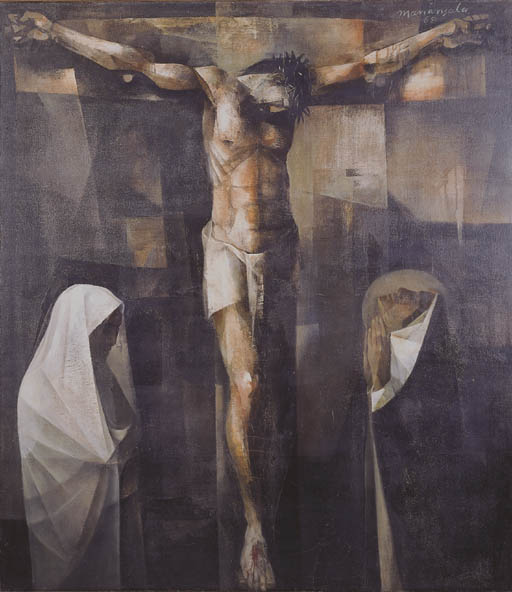 'the best way to develop one's self is to be exposed to the different -isms. I study these -isms, take from them what I can, then add my own feelings and elements. When I say I'm a cubist, I mean that I have taken Cubism's basic elements, reorganised them and added my own, creating my own style.' (Rudolf Paras-Pezez, Manansala, PLC Publications, Manila, 1980, p. 51)
- Manansala

Of all the post-war artists in the Philippines who have exerted their influence in the way later artists define their artistic roles, Vicente Manansala (1910 - 1981) is undoubtedly one of the most important.

Cubism forms the backbone of Manasala's works, but he injected his own strength of talent on the canvas. What results is a compelling amalgamation of Cubist elements and realism. He never compromises the lucid recognition of his subject matter.

In his paintings, the viewer is never in doubt, nor hesitant towards what greets his eye. Yet forms such as the garments on his always-recognisable figures are always rendered in a mosaic of geometry and semi-abstraction. This distortion of familiar figures lend a touch of modernity to Manasala's work and creates an ongoing dialogue between the canvas and the spectator.

Manansala's aggressive, almost elemental approach to Cubism makes his paintings stand out from his contemporaries. Yet, because he situates them within the indigenous scope of Southeast Asia, his viewers' appreciation of their haunting beauty is heightened because they are able to connect with the works on a local, cultural scale, other than merely the aesthetic.

Being a Catholic country, the Philippines offers environs of religiosity that is both intimate and formal. It is not uncommon for Filipino artists to evoke a sense of piety in their works. Manansala, once mentioned:

'I used to go to Mass everyday at the San Francisco Church. At 14, I wanted to become a priest.' (Rudolfo Paras-Perez, Manansala, PLC Publications, Manila, 1980, p.135)

He was known to be a devout Catholic who painted religious subjects with profound piety and intense affection. On the depiction of common folks in prayer in his painting, Praying, Manansala remarked:

'I wanted to show the intensity of people praying, of how they plead, give me this, and give me that.' (ibid., p.139)

On themes such as the Crucifixion and Pieta, of which the artist painted several variations throughout the different stages of his career, Manansala was instead more concerned with expressing the sublime quality of spirituality.

He acknowledged that in a comment made about his Crucifixion of 1953:

'I wanted to show the power of God in a silent manner, to express reverence and respect' (ibid, p.140)

With this present Crucifixion, which was painted later 1968, it is evident that the artist was still preoccupied with the same issues. He depicts the all-embracing, loving Christ on the cross, in elegance and in peaceful repose. The Virgin Mary and John, the disciple Jesus Christ loved most are counterposed at his side, grieving quietly.

Manansala's cubist representation of the time-honoured theme of the Crucifixion does not necessitate a disfiguration of the subject, but in its place, a new respect for the integrity of the natural forms of the subject is achieved when viewed from pluralistic perspectives.