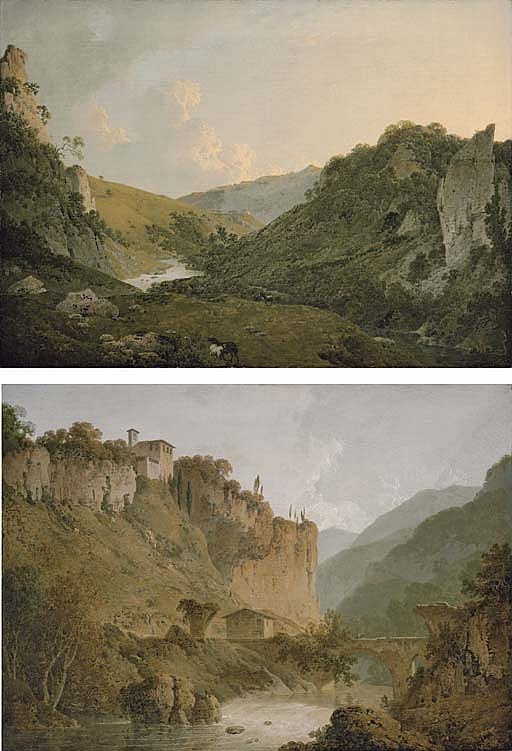 View in Dovedale, Derbyshire; and View of the Convent of San Cosimato and part of the Claudian Aquaduct near Vicovaro in the Roman Campagna

Lot 41: View in Dovedale, Derbyshire; and View of the Convent of San Cosimato and part of the Claudian Aquaduct near Vicovaro in the Roman Campagna

Property of the Executors of the Late 3rd Viscount Scarsdale


Commissioned as a pair by the artist's great friend the Reverend Thomas Gisborne, of Yoxall Lodge, Staffordshire, these landscapes express the notion that the sublime might be found equally in the English and Italian countrysides: a sentiment endorsed by Lord Byron in a letter to Thomas Moore thirty years later: 'Was you ever in Dovedale? I can assure you that there are things in Derbyshire as noble as Greece or Switzerland' (letter of 31 March 1817, cited in L.A. Marchand, ed., Byron's Letters and Journals, V, 1976, p. 201). Painted in 1786, this pair of pictures testifies to Wright's brilliance as a landscape artist.

Wright began sketching in Dovedale with its low wooded hills in the early- to mid-1780s. Nicolson commented of the resultant sketches and watercolours: 'there is no question of gratifying contemporary taste with amendments to nature...[Wright] was free to jot down whatever was there, unadorned' (op.cit., 1965, p. 89). Nicolson went on to remark that the present painting of Dovedale was 'almost as free from cunning as the watercolour [Derby Museum and Art Gallery; op. cit, 1968, fig. 254]' (ibid., p. 90). Wright painted Dovedale at different times of the day and night, and from various points along the River Dove, during the mid-to-late-1780s. Four other views of Dovedale are known, three in private collections and a fourth in the Allen Memorial Museum, Oberlin College (ibid., pp. 265-6, nos. 316-9).

Wright visited and sketched the Anio valley during his time in Rome, between February 1774 and September 1775. He sketched avidly in the Campagna and the Kingdom of Naples throughout this period, including grottoes in the Gulf of Salerno and an eruption of Vesuvius witnessed in October 1774, gathering material for oil paintings which he would execute on his return to England. The ancient Convent of San Cosimato stands on a hillside near Vicovaro, thirty two miles from Rome, just beyond the ancient town of Tivoli, of which Wright executed several views. It is situated in the narrowest point of the Anio valley, above part of the Aqua Claudia, which was begun by Emperor Caligula in 38 A.D. and completed by Emperor Claudius in 52 A.D. The River Anio (sometimes called the Aniene) flows down from the mountains at Trevi through a fertile valley of chestnut trees and olive groves. Wright went on to paint two other versions of this view on the Anio: the first dating to the late 1780s (Liverpool, Walker Art Gallery); the second signed and dated 1789 (Private Collection) (ibid., pp. 252-3, no. 264, pl. 283 and no. 263, pl. 283 respectively). It seems likely that the picture exhibited at the Royal Academy in 1788 (no. 98), entitled 'The Convent of St. Cosimato, near Vicobaro [sic], and remains of the Claudian Aqueduct, on the river Anio [sic - later mis-transcribed as Arno]', is either the present painting, or the version at the Walker Art Gallery.

Wright's friendship with Gisborne, which Nicolson describes as 'one of the bright spots in a melancholy life' (ibid., p. 133), dated from the summer of 1777, when Wright was commissioned to paint Gisborne in academic robes for his old Harrow headmaster, Dr. Heath (private collection). On finishing his studies at Harrow, Gisborne had been admitted as Fellow Commoner at St. John's College, Cambridge in 1776, where he won Sir William Browne's Gold Medal for a Latin ode and the Chancellor's Gold Medal for Classics, as well as establishing a lifelong friendship with William Wilberforce (1759-1833). On graduating, Gisborne was offered a parliamentary seat, but instead chose to take Holy Orders. He was ordained deacon in 1781 and priest in 1783, and was presented to the perpetual curacy of the parish of St. James's Barton-under-Needwood, occasionally acting as Prebendary of Durham Cathedral. In 1784, he married Mary (1760-1848), daughter of Thomas Babington of Rothley Temple, Leicestershire, and settled at Yoxall Lodge, in the heart of the Needwood Forest, which he had inherited on his father's death in 1779.

Wright painted Gisborne for a second time in 1886, the same year as the present landscapes, with his wife Mary in the grounds of Yoxall Lodge (Yale Centre for British Art, Paul Mellon Collection; ibid., p. 199, no. 67, fig. 269). Originally a hunting lodge, Yoxall had been rebuilt as a Georgian country house by Gisborne's father. The forest has now been stripped almost bare of its oaks and Yoxall Lodge was pulled down in the early 20th century.

Wright became a regular visitor at Yoxall from the 1780s, attracted both by Gisborne's engaging company and the Lodge's picturesque surroundings. A conscientious clergyman and philanthropist, Gisborne took an early stance against slavery, in support of his old friend and contemporary William Wilberforce, whom Wright may have met at Yoxall. Wright was drawn to this new generation of philanthropists, whose strong religious convictions provided a refreshing contrast to the rationalist approach of his own generation. Gisborne was also an amateur artist and botanist, deeply interested in natural history and ornithology. Sir James Stephen described Gisborne's study as 'a chamber which it might seem no dealer in household furniture has ever been permitted to enter, but where books and manuscripts, plants and pallets, tools and philosophical instruments, birds perched on the shoulder...usurped the places usually assigned to the works of the upholsterer' (cited in J. Egerton, Wright of Derby, exhibition catalogue, Tate Gallery, London, 1990, p. 224). Wright and Gisborne are said to have sketched together in the mornings and played the flute together in the evenings at Yoxall (Wright's niece's Memoirs, MS. 2, Derby Public Library, cited in Nicolson, op.cit., 1965, p. 59). Some of Wright's studies of gnarled oaks in the vicinity of the Lodge are now in the Derby Museum and Art Gallery.

Two years after the present landscapes were executed, Gisborne commissioned Wright to paint an Eruption of Vesuvius. In his Walks in a Forest, a slim volume of blank verse describing the various stages of day and year at Yoxall (published 1795), Gisborne made digressions into the beauties of Dovedale and the sublimity of volcanic eruptions - with Wright's artistic interpretations of both now hanging on his walls. He owned a number of other pictures and drawings by Wright, mostly of 'sublime' or 'picturesque' subjects. In 1793, in the same year that Wright accompanied Gisborne on a picturesque sketching tour of the Lake District, Wright presented Gisborne with a self-portrait at the age of 59, that was executed while at Yoxall and inscribed (in Latin) 'to his friend T. Gisborne' (untraced).

By 1922, the present pictures were in the collection of the great proconsul of the British Empire, George Nathaniel, 1st Marquess Curzon, of Kedleston Hall, Derbyshire (1850-1925), the second of eleven children of the Reverend Alfred Nathaniel Holden Curzon, 4th Baron Scarsdale (1831-1916), and his wife Blanch (1837-1875), daughter of Joseph Pocklington Senhouse of Netherhall in Cumberland. A Conservative statesman, George Nathaniel served as Viceroy of India (1899-1905) and Foreign Secretary (1919-1924). Of Norman ancestry, the Curzon family lived on roughly the same site in Derbyshire since the 12th century. In 1759, Sir Nathaniel Curzon, later 1st Baron Scarsdale, demolished the existing house and commissioned the Palladian architects James Paine and Matthew Brettingham to build Kedleston Hall. Robert Adam, who had been at work designing garden temples for the park, was called upon in 1760 to work on the south façade.