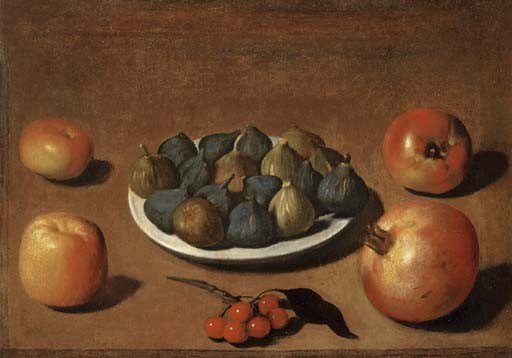 The present painting is one of a small cohesive group that scholars have identified as among the earliest known Italian still lifes. Luigi Salerno was the first to recognize the importance of this Plate of figs with apples, cherries and a pomegranate, publishing it as by Vincenzo Campi in 1984 (with a pendant still life of melon and grapes also in the Lodi collection). Although a few independent still lifes (i.e. without figures) had previously been attributed to Campi, none were of sufficiently high quality to attract the attention of scholars.
Campi's reputation is based on his innovative and influential production of market and kitchen scenes in which fruits, fish and poultry are given precedence over the human actors. His interest in such subjects was clearly inspired by the paintings of two Netherlandish artists, Pieter Aertsen and his pupil, Joachim Beuckelaer. Although motivated by Northern examples, Campi's style was based on the naturalistic roots of Lombard paintings. His willingness to cast off Mannerist artificiality in favor of an objective description of the sensuosity and substance of nature had a profound impact on the evolution of still life painting in Italy and in particular on a young artist born a few miles outside of Cremona in the rural town of Caravaggio.

Typical of the earliest surviving still lifes, the present painting examines the fruits one-by-one without attempting to organize them into a decorative arrangement. The viewer senses the painter's delight in the adventure and effort to abandon the old habit of viewing nature in a generalized way. Each piece casts its own separate shadow. The resulting sense of isolation and weight account for the timeless, even 'modern', sensibility of this remarkable still life.

Recently, Franco Paliaga published a Campi monograph in which the present painting and its pendant formerly in the Lodi collection are plausibly associated with an important early still life ascribed by Ferdinando Bologna to the sixteenth-century school of Brescia. One or two other paintings may belong to the same group (cf. Paliaga 1997). The alternative attribution to a Brescian contemporary of Campi, instead of Campi himself, is apparently based upon the atmospheric and warm tonalities of reds, orange and brown in these paintings. There is an historical referent as well: Roberto Longhi observed in a pioneering article of 1929 (Questi caravaggeschi: I precedenti), that the origins of Lombard still lifes traced ultimately back to the naturalistic details favored by the Renaissance master, Moretto da Brescia.

We are grateful to Dr. John Spike for the above catalogue entry.