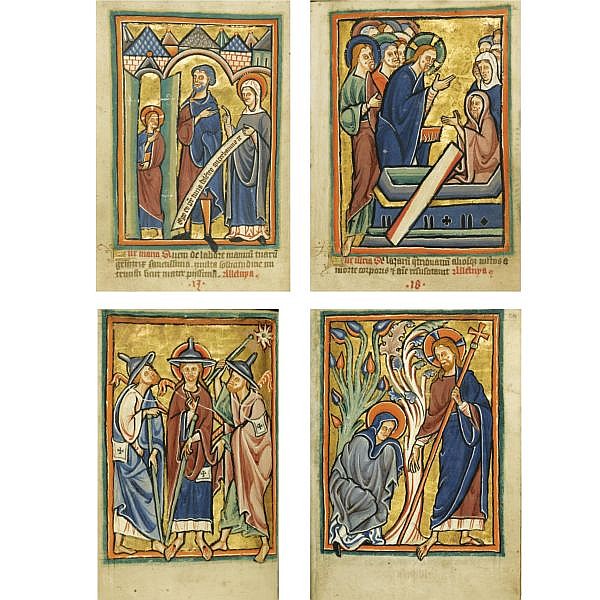 Vita Christi, an illustrated life of Christ and of the Virgin, in Latin, supplemented to become a Rosary and devotional volume, in Latin and Middle English, illuminated manuscript on vellum

Lot 45: Vita Christi, an illustrated life of Christ and of the Virgin, in Latin, supplemented to become a Rosary and devotional volume, in Latin and Middle English, illuminated manuscript on vellum

provenance(1) The manuscript was assembled in its present form in the late fifteenth century (not earlier than 1479) by a private owner in East Anglia, possibly a Carthusian but more probably an exceptionally devout layman (prayers are in male form), perhaps a mystic or even a recluse. A possible candidate could be Robert Leake (d.1517), hermit at Blythborough, Suffolk, whose name might explain a local veneration to Robert, martyr of Bury St Edmunds (R. M. Clay, The Hermits and Anchorites of England, 1914, p.249). Dr Bale, The Jew in the Medieval Book, proposes that the patron was the man kneeling in the miniature on fol.44r, apparently a layman, for he wears fur, and, given the sixteenth-century ownership (see below), suggests that he might be an earlier member of the same wealthy family, such as Robert Themilthorpe (d.1505), also a Robert, of Foulsham, north Norfolk, benefactor of the local guild of Holy Innocents (T. Quarles, History and Antiquities of Foulsham, in Norfolk, 1842, pp.128-9). The vellum shield with the five Wounds of Christ pasted to fol.4v is probably a souvenir from a pilgrimage to the Bridgettines of Syon, a journey made by many pious laity, including Margery Kempe from Norfolk.(2) Sixteenth-century inscriptions on the flyleaves include the names of Susanna Flint and John Pinchbeck (fol.1r, the latter a Norfolk and Lincolnshire surname), and two signatures of Robert Themilthorpe (fols.4r and 4v, "Aetat. 42" in 1594, born therefore in 1551-52), son of George Themilthorpe, or Thimblethorpe, of Foulsham and Worstead, Norfolk, who matriculated at Jesus College, Cambridge, in 1570, and held the patronage of the rectory in Themelthorpe, near Foulsham, in 1586 (Venn and Venn, Alumni Cantabrigiensis, IV, p.219; F. Bloomfield, An Essay towards a Topographical History of the County of Norfolk, 1808, VIII, p.278). (3) N. Roe, 1760 (signature on fol.1r).(4) C. W. Dyson Perrins (1864-1958), his oldest English manuscript and no.1 in his catalogue, bought from Quaritch in 1916; his sale in these rooms, 1 December 1959, lot 55, illustrated in colour, to Laurence Witten (his cat. 5, New Haven, 1962, no.11, illustrated on the cover), from whom it was bought by the father of the present owner.