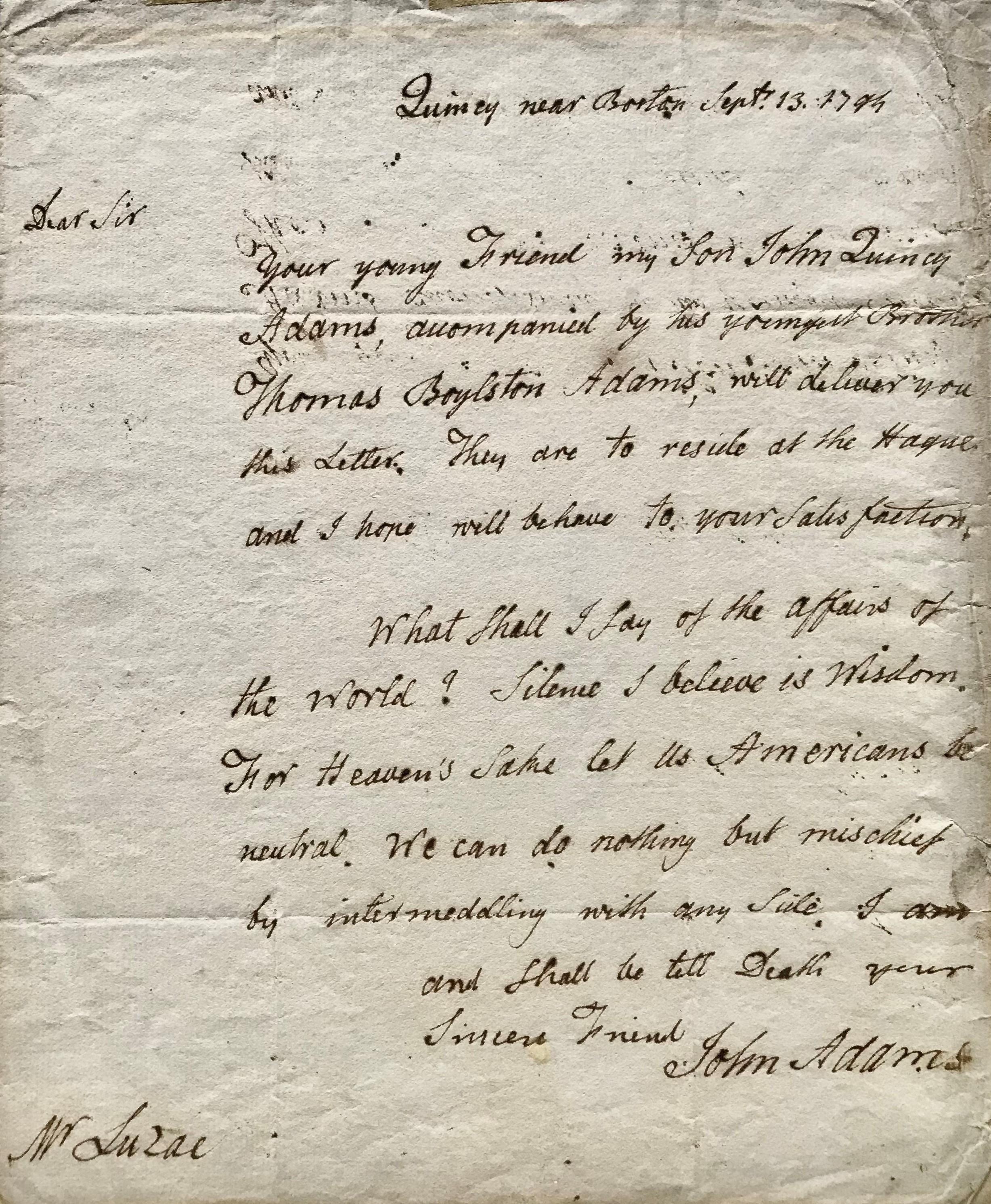 VP John Adams and the War Between France and Britain “What shall I say of the affairs of the World? Silence I believe is wisdom. For heaven’s sake let us Americans be neutral. We can do nothing but mischief by intermeddling with any side” 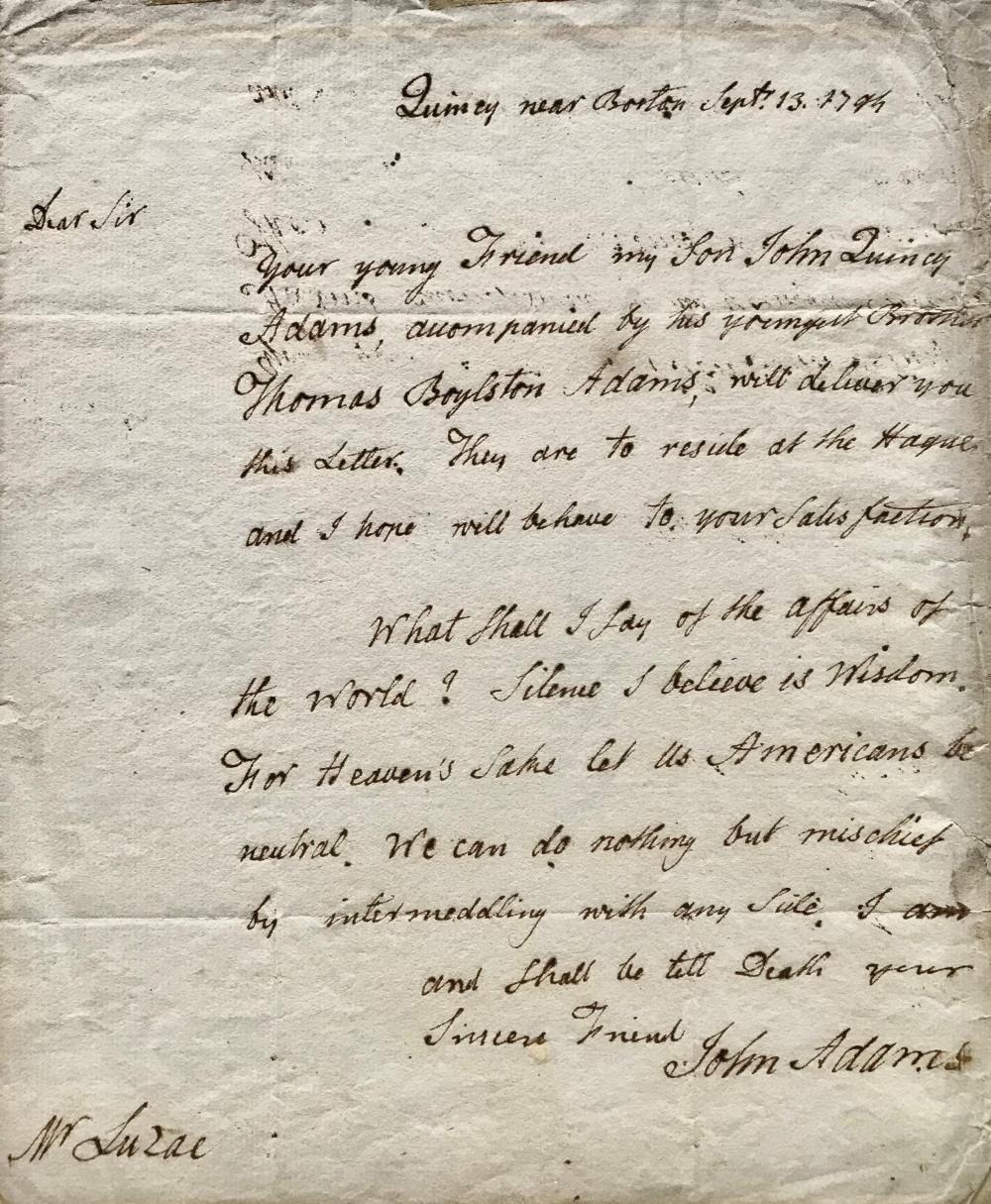 Lot 5: VP John Adams and the War Between France and Britain “What shall I say of the affairs of the World? Silence I believe is wisdom. For heaven’s sake let us Americans be neutral. We can do nothing but mischief by intermeddling with any side”

ADAMS, JOHN. (1735-1826). Second president of the United States known for his role in drafting the Declaration of Independence and negotiating peace with Great Britain during the American Revolution. Unpublished, vice-presidential ALS. (“John Adams”). 1p. 4to. Quincy, September 13, 1795. To JEAN LUZAC (1746-1807), editor of the influential Dutch newspaper Gazette de Leyde.

“Your young friend my son John Quincy Adams, accompanied by his youngest brother Thomas Boylston Adams, will deliver you this letter. They are to reside at the Hague and I hope will behave to your satisfaction.

What shall I say of the affairs of the World? Silence I believe is wisdom. For heaven’s sake let us Americans be neutral. We can do nothing but mischief by intermeddling with any side. I am and shall be till Death your Sincere Friend…”

Massachusetts delegate to the first and second Continental Congresses and an author and signer of the Declaration of Independence, Adams, along with Benjamin Franklin, served as joint commissioner to France in 1777 after which he spent the next ten years representing American interests abroad. During 1780-1781, Adams sought financial aid and support from the Dutch Republic. Upon his arrival in Amsterdam, Adams asked Luzac, who sympathized with the American cause, to print his letters and reports in his influential and widely read Gazette de Leyde, Europe’s newspaper of record. Luzac and Adams maintained a correspondence until at least 1805. Despite Adams’ appeals in the Gazette, the Dutch Republic, heavily dependent on shipping, remained unwilling to aid the rebels and risk British reprisals.

Nonetheless, along with John Jay and Franklin, Adams facilitated an end to the American Revolution with the restoration of peaceful relations and commercial ties between the U.S. and Britain in the 1783 Treaty of Paris. Adams received the second largest number of votes in the first presidential election thus becoming the United States’ first vice president, a position he held from 1789-1797.

Beginning several years prior to our letter, France had been recruiting American privateers to help attack Spain and Great Britain against whom it had declared war in February 1793. Despite its earlier military alliance between the American colonies and France, George Washington’s Proclamation of Neutrality issued on April 22, 1793, declared its neutrality in the European conflict as did the ratification of the Neutrality Act of 1794, making it illegal for American citizens to engage in hostilities against a nation with whom the country was at peace. The Senate’s ratification of the Jay Treaty on June 24, 1795 resolved lingering hostilities between Great Britain and the U.S. Washington and Adams’ support of normalized relations, and its declaration of neutrality was unpopular. Detractors accused them of abandoning their revolutionary ally, France, and surrendering autonomy to the tyrannical monarchy they had just overthrown. However, Adams and his fellow Federalists were appalled by the excesses of the French “Reign of Terror,” during which many of their French brothers-in-arms from the American Revolution had been imprisoned and even executed. The disagreement over foreign policy led to the foundation of the first American political parties, and in 1796, Adams ran as a Federalist – the first presidential election with competing party affiliations. He served a single term becoming a favorite target of his rivals Alexander Hamilton and Vice President Thomas Jefferson.

At the time of our letter Adams’ eldest son John Quincy Adams (1767-1848) was a young lawyer who President Washington had appointed American ambassador to the Netherlands in 1794. There he helped secure loans for the American government and support for the Jay Treaty. After a subsequent diplomatic post in Prussia, Adams became a U.S. Senator at 35. He served as President Monroe’s secretary of state (one of the finest ever to hold that position), helped shape the Monroe doctrine and resolved by treaty the Spanish claims on the American continent. Adams’ 1824 presidential victory made him the first, and up until recently, the only son of an American president ever to serve in that capacity. After his defeat in the 1828 election, he eschewed a quiet retirement, and was elected to the House of Representatives in 1830, the only ex-president to serve in Congress, where he lent his strong voice against slavery. Adams was accompanied on his diplomatic postings by his younger brother Thomas Boylston Adams (1772-1832), who had also studied law and served as his elder brother’s secretary from 1794-1798. Upon his return to Quincy, Thomas served in the Massachusetts state legislature, but succumbed to alcoholism, as did his brother Charles, leaving his family deep in debt.

With the integral address leaf attached and addressed in Adams’s hand, “Mr. John Luzac / Leyden.” The absence of an address and postal markings suggests that this letter was personally delivered by John Quincy Adams upon his arrival in Leyden. Light matte-burn with some wear along the letter’s right edge, affecting a couple of words. The ink is dark and Adams’ signature strong. Apparently unpublished as it is not included in the Adams Papers Digital Edition (http://www.masshist.org/publications/adams-papers/). [amerhist]

Request more information
Contact: Lion Heart Autographs
Auction: Hidden Away for Decades, Two Extraordinary Autograph Collections Are Now Back on the Market
Auction Date/Time: April 28, 2021
Lot 5: VP John Adams and the War Between France and Britain “What shall I say of the affairs of the World? Silence I believe is wisdom. For heaven’s sake let us Americans be neutral. We can do nothing but mischief by intermeddling with any side”
Cancel

Hidden Away for Decades, Two Extraordinary Autograph Collections Are Now Back on the Market

Every autograph Lion Heart Autographs sells is unconditionally guaranteed authentic without time limit to the original purchaser. All sales are final unless an item is determined to be inauthentic or not as described. New York State residents pay applicable sales tax. Shipping charges are additional.

New York State residents are required to pay applicable sales tax. Customs and/or import fees are the responsibility of the buyer.