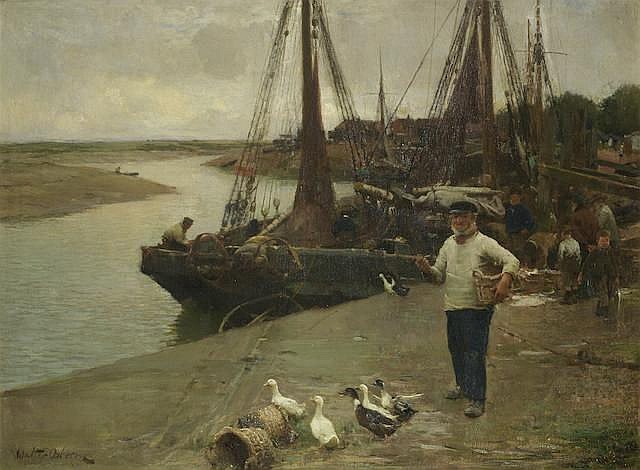 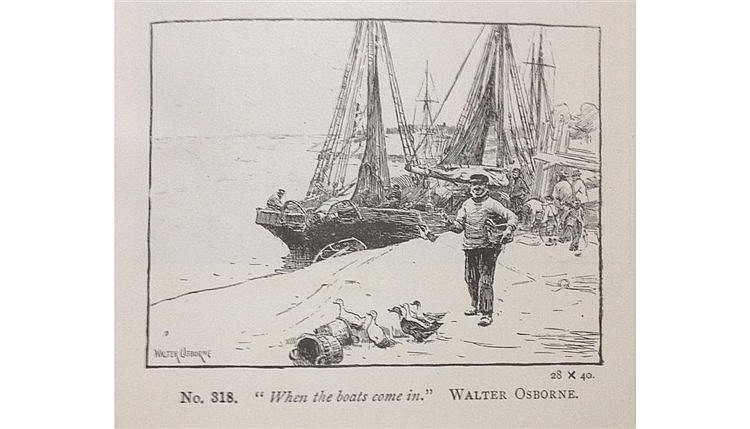 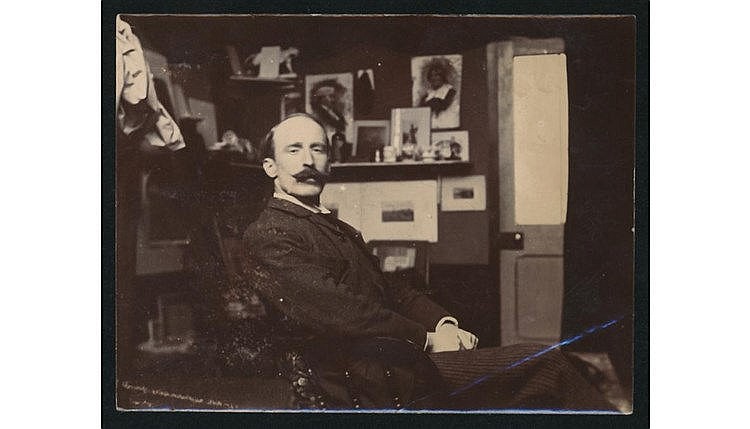 
Perhaps best-known for his street and market scenes in Dublin, his paintings of families in parks, or of children in gardens and interiors, and some of his portraits, much of Walter Osborne's finest work was also painted in England. Having undertaken his studies in Dublin and in Antwerp, and painted in the open air in Brittany, the artist spent much of the period, 1884-1891, in England, basing himself in a number of small towns and villages, with pets, bustling streets, quiet village or harbour scenes, agricultural subjects of people at work in the fields, and landscapes. These comprise a substantial body of work in the middle of Osborne's career, and include some of his finest paintings.

He worked in a number of coastal towns and villages, including Southwold and Walberswick in Suffolk, Lincoln, Wells-near-the-Sea, and at Hastings and Rye in Sussex. The present painting When the boats come in is a companion picture to Osborne's canvas The Ferry, 1890, which was painted at Rye, and which was described by Thomas Bodkin as 'the most important large landscape of Osborne's earlier works'1, which was sold at an auction in Dublin in 20132. While walking in the Sussex countryside in the 1870s English reformer Richard Heath encountered considerable poverty3. However, coastal towns and fishing ports were more prosperous and provided many with a living. Osborne was based at Rye in Sussex in c.1889-91, and found it a most congenial and inspiring place to work. He was attracted to both the town and the harbour, and executed some of his most important English works here, including Cherry Ripe c.1889 (Ulster Museum, Belfast); Boats in Rye Harbour (National Gallery of Ireland), a wash painting; The Ferry; When the boats come in; and possibly The Boat Builders, and he also took photographs.

Rye had been an ancient fortified town on the Sussex coast, and became one of the Cinque (five) ports4, but in the Middle Ages it was hit by a number of misfortunes; in 1287 a massive storm diverted the river Rother, and in 1377 the town was attacked and burned by the French. It was rebuilt, but in the 16th century the harbour began to silt up, and the town became situated two miles inland. In Osborne's day the town had a pretty, bustling main street of red brick and timber houses, as can be in his Cherry Ripe. He was also fascinated by the harbour of Rye, with its fishing community, fleet of boats, red-roofed village nestling among the trees, mud banks, and the winding, serpentine river flowing towards the sea. This river estuary is an important feature in The Ferry and When the boats come in, however Osborne takes a different viewpoint in each picture. The Ferry features a family group on the riverbank in the foreground, with the fishing fleet in the middle distance, whereas the present picture takes a different viewpoint further along the bank, but looking back, with a large boat in the foreground, figures at work, and red rooftops visible behind. From foreground to background in When the boats come in Osborne presents a host of different characters and bustling activity.

The stocky, bearded fisherman with white jersey, sailor's cap and pipe, is a good character study. There is another figure in similar attire in the prow of the fishing boat, and indeed a similar figure in the rowing boat in The Ferry5. In the foreground are some baskets and a flock of geese. Behind, to the right, are groups of fishermen, villagers and boys at work on the quayside. The small boy on the right carries a fish, while a man leans over a basket of fish, and there appear to be plaice on the ground. These activities, along with the grazing geese, are just the kind of genre details that Osborne loved to depict in his rural pictures.

In The Ferry various kinds of vessels, including a cutter, schooner and fishing boat, are visible6. Likewise, in When the boats come in Osborne shows a heavy, broad-beamed wooden vessel, with rigging visible and sails lowered, and a rowing boat half-hidden by the riverbank. Behind, red houses and trees can be seen, while the winding river entices our eyes towards the flat landscape, with low hills in the distance, and a grey, cloudy sky. Osborne was masterly in painting the placid waters of the estuary, with ripples reflecting tones of pale ultramarine, silver and pale pink. In both When the boats come in and The Ferry the sky is overcast, the light sombre, providing a subdued, but rich, tonality: grey-green, umber and brown in the present picture, and more pinkish in The Ferry.

Osborne painted his landscapes and small studies directly from Nature, but there is evidence that he employed preliminary drawings and photographs in the construction of his larger compositions, which he prepared for exhibition. Although ostensibly Naturalistic, When the boats come in is composed very carefully. The artist often placed figures in the foreground of his compositions, and here the fisherman may have been added as a point of focus and interest, almost as if he is pausing for a photograph, in front of the general group of figures. There are suggestions of changes of brushwork and pentimento around him, and the edge of the fishing boat and the rigging, providing interesting information on slight changes of composition, and processes of thought, made by the artist while he was composing the picture.

When the boats come in may have been painted around 1890-91 and (in contrast to The Ferry which has a signature with squared capitals), bears a more cursive signature. It was exhibited at several important venues: at the Royal Academy, London and Autumn Exhibition, Liverpool, in 1892, and at the Royal Hibernian Academy, Dublin in 1894, and it was illustrated in several exhibition catalogues.

We are grateful to Julian Campbell for his assistance in cataloguing this lot.