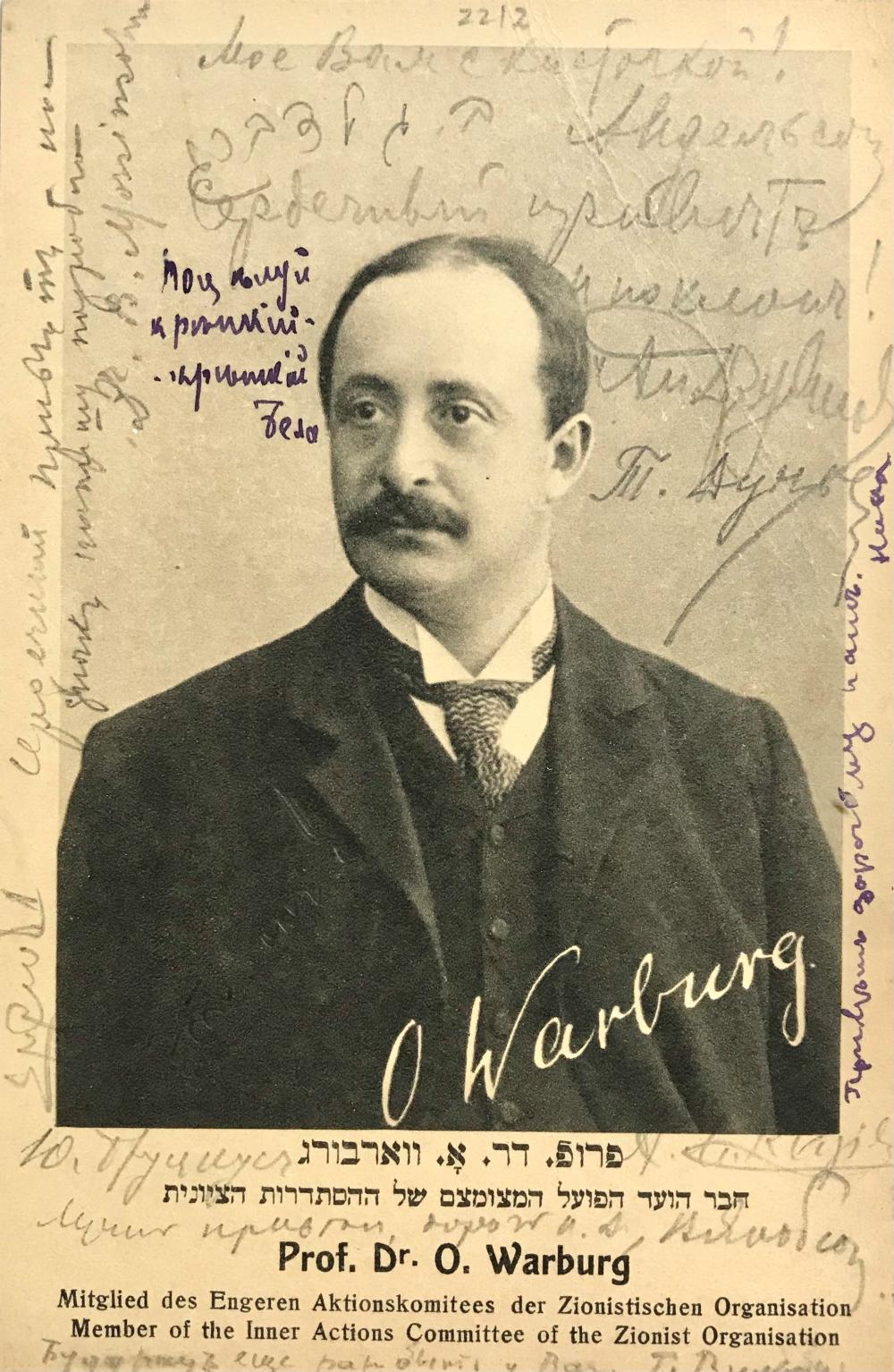 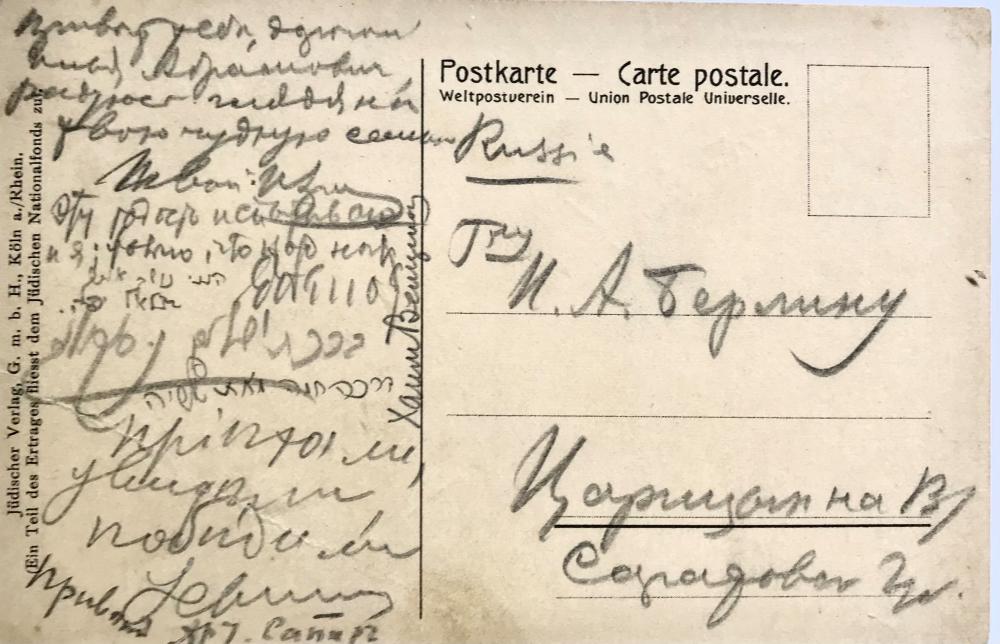 ZIONISTS. Signed postcard. 2pp. 8vo. N.p., n.d. A souvenir postcard with a printed portrait of Otto Warburg (1883-1970), German botanist, pioneer and president of the Zionist Organization from 1911 to 1921, signed by future president of Israel Chaim Weizmann and 16 other Zionists. Addressed to ILIYA ABRAMOVICH [ELIYAHU] BERLIN (1886-1959), a Zionist activist, member of the Provisional State Council and a signer of the Israeli Declaration of Independence. The portrait of Warburg bears a reproduction of his signature and has captions in Hebrew, German and English identifying him as a member of the Inner Actions Committee of the Zionist Organization. Fine print, in German, on the recto, notes that proceeds from sale of the postcard go to the Jewish National Fund, which was founded in 1901 to develop land in Palestine, then part of the Ottoman Empire. The postcard is addressed to Berlin at an address in the Saratov Gubernia [Saratov Administrative Region] of Russia, and a pencil message written in the top left portion of the recto reads: “Hello my dear Iliya Abramovich, I feel happy looking at your wonderful family. Yours, I… [illegible signature]”

Signed on the recto by:

TSCHLENOW, JEHIEL (YEFIM VLADIMIROVICH). (1863-1918). A Ukrainian physician from Moscow who had become a Jewish nationalist after the pogroms of 1881 and vice president of the Zionist Organization. Beginning in 1908, he headed the Zionist Movement in Moscow and was a board member of the Jewish Colonial Trust. Tschlenow later participated in the negotiations that led to the Balfour Declaration.

WEIZMANN, CHAIM. (1874-1952). Russian born chemist, Zionist leader and first President of Israel. After lecturing on chemistry at the University of Geneva, Weizmann immigrated to England where he accepted a position at Manchester University. While there, he gathered a group of Zionists that came to be known as the Manchester School, whose main purpose was to disseminate information about Zionism through the publication of pamphlets, books and newspaper articles. Weizmann was instrumental in convincing the British cabinet to support a Jewish settlement in Palestine and became Israel’s first president on February 16, 1949, a position he held until his death three years later. In addition to his contributions to the state of Israel, Weizmann made several important scientific discoveries, including the invention of the acetone-butanol-ethanol fermentation process, which produces acetone through fermentation. In 1934, Weizmann founded the Weizmann Institute of Science near his home in Rehovot.

JAFFE, BEZALEL. (1868-1925). Russian Zionist leader who participated in the first Zionist Congress, published Zionist literature in Hebrew, Yiddish and Russian and, as director of the Geulah company from 1910-1925, was a founder of the city of Tel Aviv. Jaffe was also instrumental in bringing modern irrigation techniques to Petaḥ Tikvah.

SOKOLOW, NACHUM. (1859-1936). Polish-born Zionist, Sokolow became a prominent Warsaw journalist before his election as secretary general of the Zionist Organization and moving to London to assist Weizmann in 1914. An outspoken proponent of the Balfour Declaration, Sokolow served as the WZO’s president from 1931-1935 and president of the Jewish Agency for Palestine. Sokolow was also a well-regarded linguist who translated works by Theodor Herzl and Baruch Spinoza.

LEVIN, SMIRYA. (1867-1935). Russian Zionist rabbi and Yiddish journalist and orator who served in the first Duma in 1906. At the 1911 Zionist Congress, he was elected to the Action Committee and became one of the foremost leaders in the Jewish National Fund.

Signed on the verso, around the image, by:

GOLDBERG, BORIS. (1865-1922). Lithuanian Zionist and economist who frequently published on the practical settlement of Erez Israel and the demographics of Russia’s Jewish population. After his imprisonment by Russian authorities for Zionist organizing in Vilna, he immigrated to Palestine, and represented Russian Jews as a member of the Comité des Délégations Juives at the Versailles Peace Conference.

BRUTZKUS, JULIUS. (1870-1951). Lithuanian Zionist, historian and politician who wrote prolifically on the history and economics of Eastern Europe and Mizrahi Jewish communities.

DRUYANOV, ALTER. (1870-1938). Lithuanian Zionist contributor to the Hebrew and Yiddish literary press and editor of the Zionist movement’s weekly, Ha-‘Olam, who was instrumental in resettling Russian Jews in Palestine. Among his published works are the 1932 Zionism in Poland, the three-volume Writings on the History of the Ḥibat Tsiyon [Lovers of Zion] Movement and Settling the Land of Israel, and the three-volume anthology The Book of Humor and Witticisms published between 1935-1938.

Encapsulated and in surprisingly fine condition. An unusual collection of some of the foremost Zionists of the early 20th century. [indexhistory] [indexJudaica]