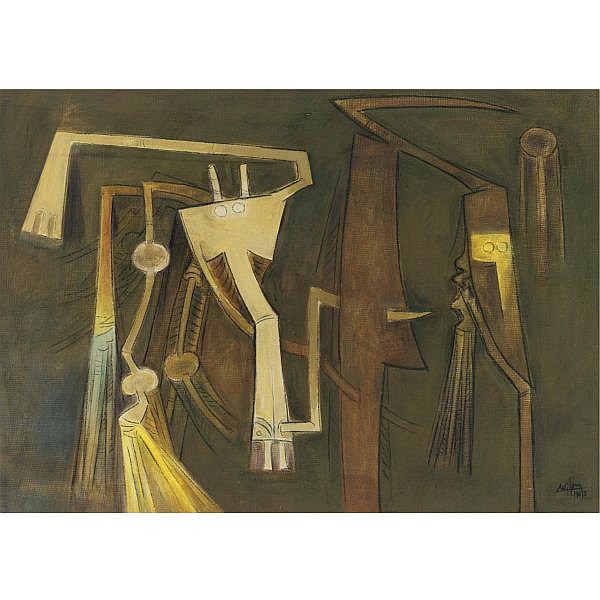 This lot is accompanied by a photo-certificate of authenticity from Lou Laurin-Lam signed and dated Paris le 29-03-2005.
With regard to life, modern painting is a revolutionary activity. . . . We need it in order to transform the world into a more humane place where mankind can live in liberty. . . . We must accept these things with passion. It means that we must live imaginatively. --Wifredo Lam, 1963 In an insightful interview with Max-Pol Fouchet, Wifredo Lam discusses his return to Cuba in the early 1940s in a way that revealed his sense of rootedness to his homeland while simultaneously conveying his philosophical stance towards modernism, "I wanted with all my heart to paint the drama of my country, but by thoroughly expressing the negro spirit, the beauty of the plastic art of the blacks. In this way I could act as a Trojan horse that would spew forth hallucinating figures with the power to surprise . . . ."υ1 This statement eloquently expresses what is perhaps Lam's most significant and lasting contribution to the history of 20υth-century art--his ability to infiltrate the European avant-garde with a uniquely Afro-Caribbean perspective that expanded and renewed the possibilities of modernism. Moreover unlike his European counterparts, Lam did not merely appropriate African motifs for their formal or geometric qualities, but rather his unique accomplishment resides in his ability to transmit the context and meaning of his referents in a manner that communicated their ethos and thus transformed and revitalized the language of modernism on a much more profound level. In many ways, Lam's radical aesthetic strategy rooted in an intercultural dialogue reflects the plurality of cultural sources that defines the Caribbean and which personified his own background as "chino-afro-cubano." Indeed in keeping with this world view, all things are interconnected and ruled not by the hierarchical conventions of western culture, but rather by the principles of fluidity, symbiosis, metamorphosis, and syncretism--a cosmological vision consistent with Afro-Cuban traditions which privilege polytheism, interconnectivity, and equality. It was this ethos that Lam was able to convey in his paintings through a highly unique vocabulary of figures and motifs that continuously morph and mutate before our very eyes thereby eluding our efforts to locate them within any fixed circumstances or narrative. In this sense, his tactics and methods for disrupting modernism were, as art historian Gerardo Mosquera describes, not unlike those of the spiritual deity Eleguá or Eshu-Elegbara--like the Yoruba god and guardian of the crossroads, Lam assumed the role of a trickster--the ultimate master of uncertainty and transformation.υ2 Executed in 1963, Personnage reflects the maturation of Lam's crosscultural idiom. Since the late 1940s, Lam's paintings began to undergo a process of synthesis and reduction as his figures became increasingly more stylized, no longer circumscribed to a recognizable landscape but rather set against an austere, stage-like space that simultaneously positioned his imagery at the crossroads of the physical and spiritual worlds. In works such as Personnage, Lam's intercultural imagery has been fully absorbed and transformed within a system or lexicon of signs rendered in a somber palette of browns, yellows, ochres and greens positioned against a shallow, atmospheric or abstract space that effectively underscores their complete detachment from the physical world. Lam's interlocking figures with their overlapping appendages and limbs interact with each other, at once mutating and morphing before us, oscillating between abstraction and figuration, no longer grounded to their space but unencumbered by any traditional notions of perspective or any references to the material world. The stylized and gestural qualities of Lam's pictographs suggests his knowledge of Chinese characters and calligraphy, and while the powerful presence of these symbols reveal a self-contained world their meaning confounds the viewer as they resist our attempts to decode and decipher them. As John Yau eloquently notes, "by the late 1950s, Lam recognized that there is no longer a native land to return to, that the animating spirits of this world can only be preserved in a language of signs. By jettisoning all references to place, as well as by underscoring the figures non-human qualities, Lam emphasizes the self-sufficiency of this language.υ3 In the context of post-War art, Lam's interest in developing a self-contained language of potent symbols that would serve as an alternative to the European vanguard resonates well with the concerns of a number of his counterparts from the New York School, such as Franz Kline, Adolph Gottlieb, and Richard Pousette-Dart. Likewise one is also reminded of the work of the Uruguayan Joaquín Torres-García, who gravitated to Amerindian cultures, much like Lam did to Afro-Cuban sources, to create a "universal constructivist idiom" that would reposition the South vis à vis its relationship with the North. It is in the context of this radical moment of shifting paradigmatic views that one must position Lam's production. Thus, in its mature phase, as evidenced in the painting Personnage, Lam's work effectively realized his desires to redefine the parameters of modernism with a new language that simultaneously renewed and re-envisioned the lexicon of Western art, while in the process opening new fields of inquiry for the discourse and practice of contemporary art that continues to resonate to this day. 1 As quoted in Max-Pol Fouchet, Wifredo Lam (Barcelona/Paris: Poligrafía, S.A. and Cercle d'Art, 1976, 1υst Edition) , p. 188 2 See Gerardo Mosquera, "Modernism at the Crossroads" in Lou Laurin-Lam and Eskil Lam, Wifredo Lam: Catalogue Raisonné of the Painted Work, Volume 2, 1961-1982 (Lausanne: Editions Acatos, 2002), p. 96 3 John Yau, "Three Centimeters Above the Earth: From Hollowed Place to Pure Signs" in Lou Laurin-Lam and Eskil Lam, Wifredo Lam, p. 64 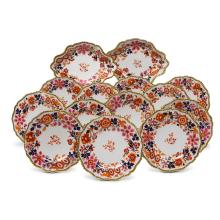 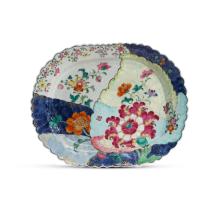 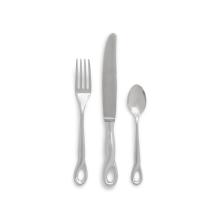