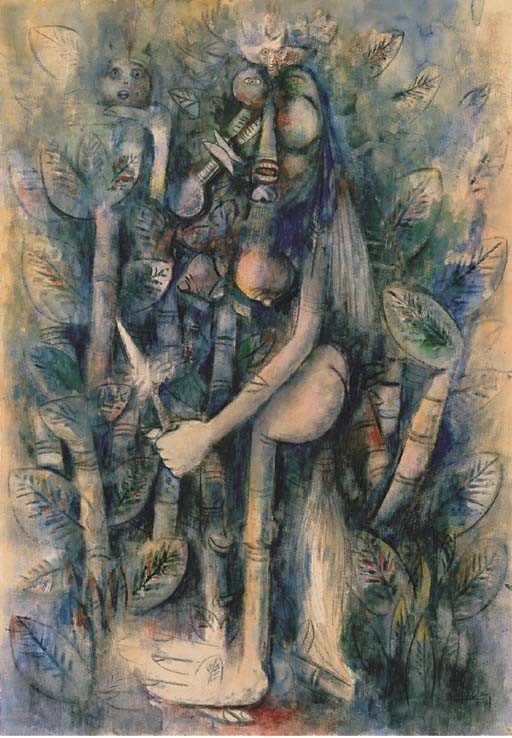 This work is sold with a certificate of authenticity signed by Lou Laurin-Lam, dated 9-12-2004.

We are grateful to Eskil Lam for confirming that the work will appear in the forthcoming revised edition of the Catalogue Raisonné of the Painted Work.

This untitled gouache by the Cuban master Wifredo Lam dates from one of the most fecund and innovative decades of his artistic career when, after returning to his native island after a fifteen-year stay in Europe, he was reinvigorated by his Afro-Cuban cultural heritage. Contributing to its rarity is the fact that unlike many of the works from this period, including his well-known The Jungle in the Museum of Modern Art in New York of 1943, this work on paper is not mounted on canvas. Instead, as fresh and vivid as when it was painted, it emanates an aura of experimental freshness and excitement. As if materializing before our very eyes a female figure appears, her sacrificial knife gleaming in the shimmering light, a numinous entity from another dimension. The translucent and dappled nature of the paint application contributes to the sensation of atmospheric movement, providing the viewer with a momentary glimpse of an unfolding psychic drama. Outlines break apart and planes of color shift between foliage and body parts as the scene hovers and vibrates, caught between two worlds in a liminal space of ritual offering and receiving.

As a child Lam was raised in a rural village where he was under the spiritual tutelage of his godmother, Mantonica Wilson, a priestess in the Santería religion. The artist observed numerous ceremonies performed within this syncretistic blend of African and Catholic religious beliefs and his memories of them remained an important aspect of his identity long after he left for Europe in 1923 to further develop as an artist. A central practice of Santería is the possession of devotees by African deities known as orishas who can thereby share their powerful life force (known as ashé) with humanity. Individuals seeking possession during sacred ceremonies are likened to "horses" waiting to be "mounted" by their appointed orishas. In addition, animal and plant offerings play an integral part in this vital exchange of energies meant to promote unity and accord between the human and the divine. Seen against this backdrop, certain visual elements in this work take on added significance. The central protagonist is clearly a devotee with her mane-like hair and horse's tail and although her knife is clearly poised in a gesture of sacrifice, one can also see in her ripe, fruit-like body parts a reference to other propitiatory offerings. What we are witnessing then is no less than that magical connect between the flesh and spirit; the "mounting" of the "horse." In this and other works of this time period, such as Malembo, Deity of the Crossroads (1943) and Le Présent eternal (1945), Lam maps out the sacred terrain of trance and transformation.

Many things in Lam's creative development led him to this phenomenal and unique exploration of Afro-Cuban spirituality within a modernist style. By the mid-1930s, while living and working in Spain, he began experimenting with Surrealism, was influenced by Matisse and after seeing an exhibition of Picasso in Barcelona in 1936, came under the sway of Cubism. By the time Lam met and befriended Picasso in 1938 he had already been looking at African art and their mutual interest in the subject encouraged him, as a person of African descent, to explore this aspect of his identity within a modernist pictorial idiom. Another pivotal artistic meeting occurred in 1939 when Lam was introduced to André Breton whose Surrealist views concerning art production profoundly influenced him. Julia P. Herzberg has insightfully outlined the many ways that Surrealism opened up new avenues of representation for the artist, ways that were in harmony with Lam's Afro-Cuban world view. As Herzberg notes, "Their visual language of biomorphic imagery was consonant with Lam's vision of a world in which the human, animal, and plant kingdoms are united" (1). Along with many other artists Lam stayed in the French port of Marseilles awaiting passage out of war-torn Europe and in 1941 traveled to Martinique with Breton where they met the Martinican black poet Aimé Césaire (Lam would later illustrate his book Cahiers du retour au pays natal). In the summer of 1941 Lam arrived in Cuba where he would live and work until 1951.

While in Cuba Lam was part of a group of Cuban avant-garde intellectuals interested in Afro-Cuban music, literature, folklore and other cultural manifestations. He was particularly close with the ethnographer Lydia Cabrera and the critic Alejo Carpentier, who also had strong ties to Europe and together they collaborated on a variety of projects of mutual interest. The Cuban anthropologist Fernando Ortíz was a key figure in the Afro-Cuban movement and was the first to point out the significance of the foliage in Lam's The Jungle, a foliage similar to that seen in this 1944 drawing. As Rocío Aranda-Alvarado points out, it was Ortíz who claimed that Lam's inclusion of sugarcane and tobacco leaves indicated not a jungle but an agrarian landscape (2). Dubbing it "Mulatto foliage," Ortíz claimed that it alluded to Cuba's fertility while Aranda-Alvarado posits a more political reading whereby Lam purposefully placed his Santería rituals within this economically fraught space as a commentary on Cuba's colonial history. These diverse readings reveal the rich and complex nature of this work by Lam, marking it as a benchmark moment in both Cuban art and 20th century modernism as a whole.