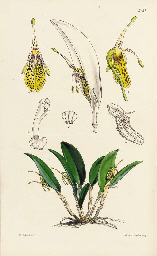 The Botanical Magazine; or, Flower-Garden Displayed. London: 1793-1841, 1845-1848, 1854-1867. Volumes 1-67, part of vol.68, 71-74, 80-92 only and General Indexes to...the first fifty-three volumes (London: 1828), bound in 54 volumes, 8o (233 x 142mm. approx.). Engraved portrait of William Curtis, approximately 5,140 hand-coloured engraved or lithographic plates, some folding, two uncoloured plates (nos. 903B and 1605B). (Occasional light spotting or browning.) Variously bound in contemporary morocco, half calf and cloth. AN EXTENSIVE RUN OF ONE OF THE OLDEST SCIENTIFIC PERIODICALS OF ITS KIND WITH HAND-COLOURED ENGRAVINGS. "THE REPUTATION OF THE MAGAZINE HAS ALWAYS RESIDED IN THE ACCURACY OF ITS PORTRAYAL OF PLANTS... THIS PICTORAL RECORD OF GARDEN AND GREENHOUSE PLANTS FROM THE TEMPERATE AND TROPICAL REGIONS OF THE WORLD HAS NO RIVAL.." (Desmond p.7). The present run covers arguably the most interesting period in the history of plant discovery and description. The first 53 volumes in this run were assembled by or for John Gordon of Culvennan (born 1829), of Greenlaw House, Kirkcudbrightshire. Somewhat unusually, all the plates have been gathered together, titled and re-numbered in manuscript and bound in 10 volumes, the text and index are bound separately in 10 volumes. The remaining volumes are bound in the usual manner in cloth or half calf. William Curtis had witnessed from personal experience that his clients refused to buy folio pictures of unassuming plants (vide, his Flora Londinensis ) but he felt that they would subscribe to an octavo work which pictured the showy plants that filled their gardens. From this premise was born the Botanical Magazine ; in February 1787, the work was immediately successful, and the early volumes were quickly reissued. William Curtis edited the work until his death in 1799 (vols. 1-13), John Sims then took over 1801 until 1826. The third period, under the editorship Sir William Hooker ran from 1827 to 1864, when sir William's son, Sir Joseph Hooker took over. The plates were worked on by many of the most prominent botanical artists of the day, here including the work of John Curtis, Sydenham Edwards, James Sowerby, William Hooker, and perhaps most note-worthy of all Walter Hood Fitch. The Magazine continued throughout the nineteenth century, and despite many changes of proprietors, editors, artist and printing methods, throughout the twentieth century. Under a different title it still flourishes today. Blunt (1994), pp.211-217; Great Flower Books (1990), pp. 156-7; Nissen BBI 2350; Stafleu & Cowan 1290. See also R. Desmond A celebration of flowers: two hundred years of Curtis's Botantical Magazine [London]: Royal Botanic Gardens, 1987; sold as a periodical not subject to return. (53).