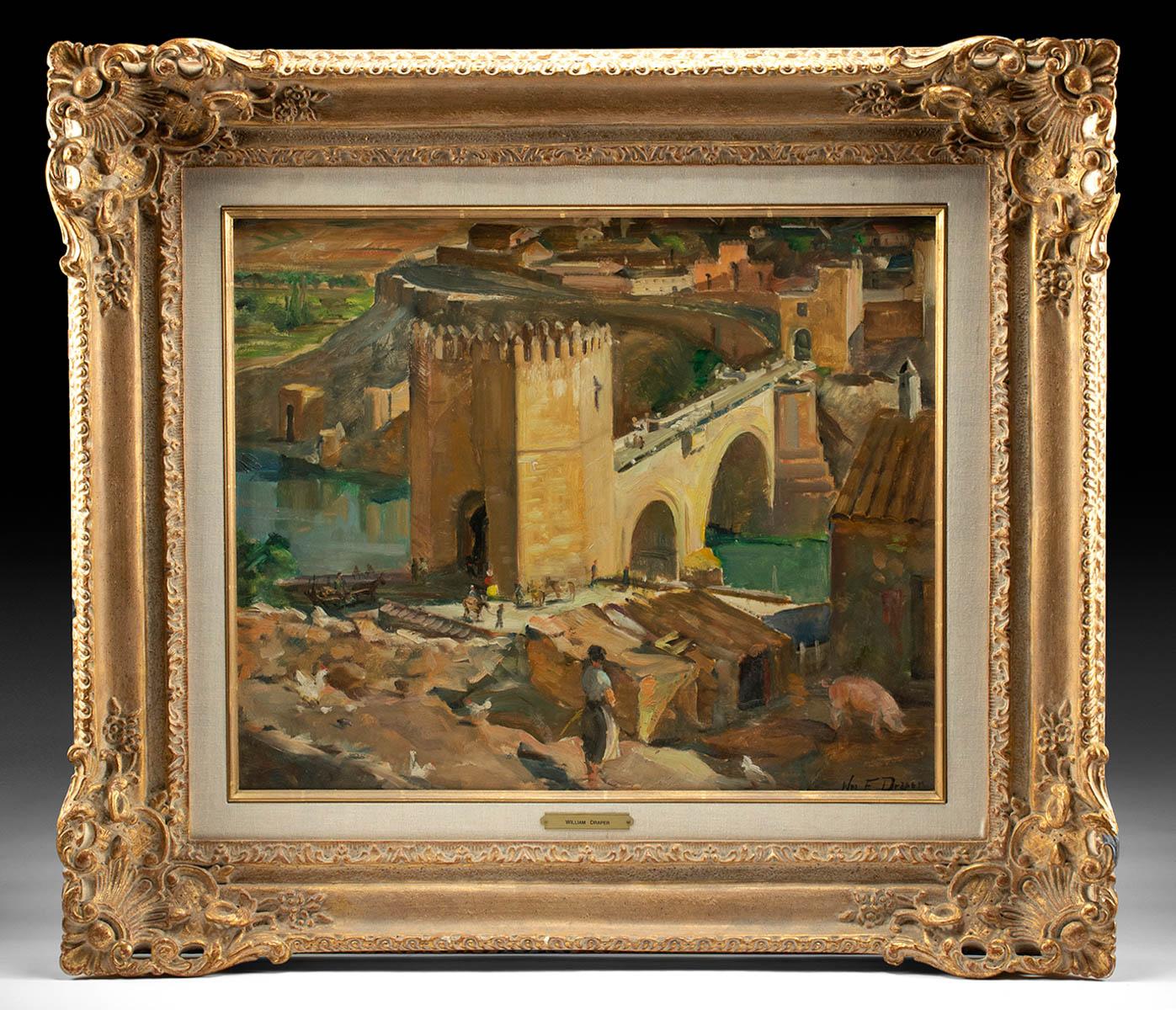 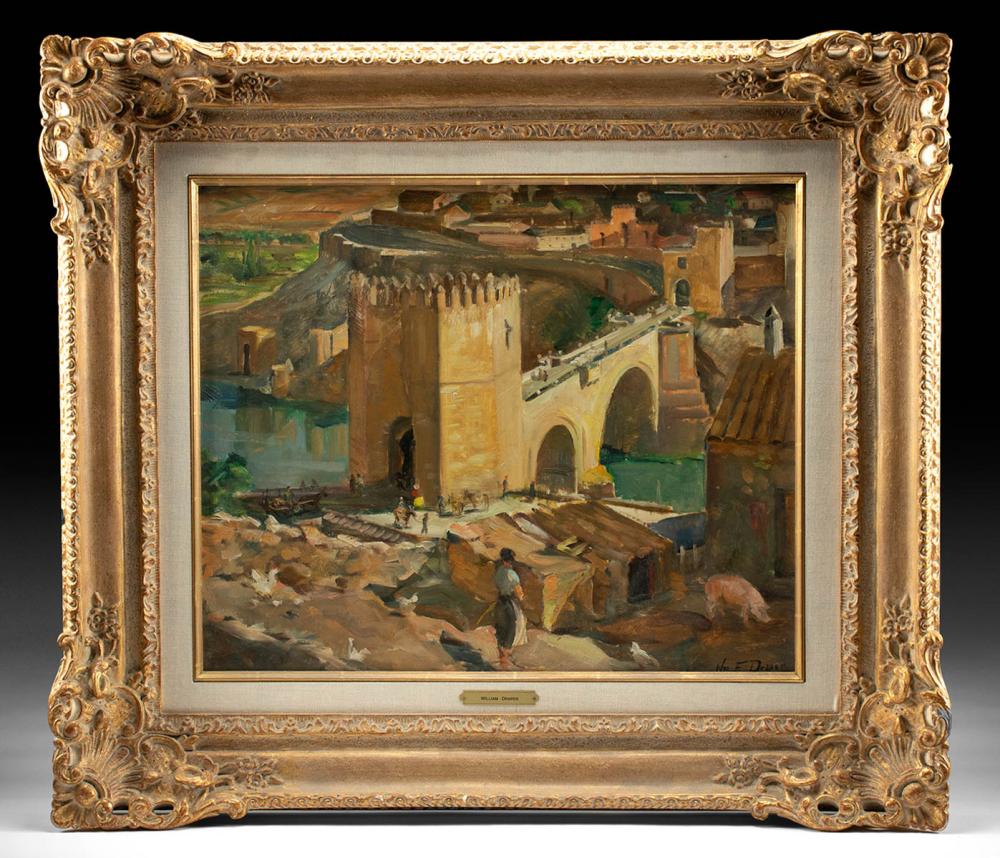 William Franklin Draper (American, 1912-2003). "Bridge Toledo, Spain" oil on board, 1954. Signed on lower right. A beautiful painting of a scene in Toledo by William Draper, created when he went to Spain on a painting holiday in 1954 with his friend, the artist Trafford Klots (1913-1976). Draper presents a magnificent view of the Puente de Alcantara, a Roman arch bridge in Toledo, Spain that spans the Tagus River, but he also enchants us with some charming touches. For example, in the foreground a woman tends to her plump pig and feeds her chickens. All is delineated with lush brushstrokes and bold palette knife gestures in a gorgeous color palette comprised of various shades of green and blue that contrast beautifully with the warm earth tones. A breathtaking view featuring this marvelous ancient bridge, replete with impressive arches, among the classical elements that would inspire a revival during the Renaissance - set in a lovely frame with a brass plate engraved with the artist's name. Size: 18.75" L x 22.625" W (47.6 cm x 57.5 cm) Size: 30" L x 33.875" W (76.2 cm x 86 cm)

Interestingly, Alcantara derives from an Arabic word that literally means "arch". The bridge was erected at the foot of the Castillo de San Servando, which was built by the Romans upon founding the city.

William Franklin Draper was born in Hopedale, Massachusetts on December 24, 1912. A child prodigy, he studied classical piano at Harvard University. He later changed his focus to fine art and studied with Charles Webster Hawthorne and Henry Hensche in Provincetown, Rhode Island. Draper also attended the National Academy of Design in New York and the Cape Cod School of Art in Massachusetts. Then he traveled to Spain and studied with Harry Zimmerman, moved on to France and attended the Academie de la Grande Chaumiere. In 1937, he moved to Boston to study sculpture with George Demetrius and also studied with Jon Corbino in beautiful Rockport, Massachusetts. In 1942, Draper joined the Navy and served as a combat artist when stationed on the Aleutian Islands and in the South Pacific. He observed and painted battle scenes on Bougainville, Guam, Saipan, and other locations, as well as genre scenes of soldiers who were not engaged in combat but rather at work and at play. National Geographic magazine reproduced 25 of his war images in four issues in 1944. In 1945, the Corcoran Gallery of Art in Washington D.C. organized a group exhibition of works by five official war artists, including Draper. That same year the Metropolitan Museum of Art included Draper in an exhibition entitled, ''The War Against Japan.'' Draper was also featured in a PBS television show about combat artists entitled, "They Drew Fire" in May of 2000. After the war, Draper opened a studio on Park Avenue in New York City and continued to not only paint, but also play classical and jazz piano.

Draper's career spanned seven decades. In addition to painting landscapes, WWII battle scenes, floral still lifes, and interiors, he was an accomplished portraitist. In fact, Draper's subjects included a portrait of John F. Kennedy that hangs in the National Portrait Gallery in Washington D.C. based upon an oil sketch for which the president sat in 1962. Draper was actually the only artist who painted JFK from life. Draper showed at Knoedler, the Graham Gallery, Portraits, Inc., the Far Gallery, The Findlay Galleries (New York, NY) and the Robert C. Vose Galleries (Boston, MA). His work has been included in shows at the National Portrait Gallery and the Corcoran Gallery of Art (Washington, D.C.), The National Academy of Design (New York, NY), The Boston Museum of Fine Arts, (Boston, MA) the Fogg Art Museum, (one of the Harvard Art Museums, Cambridge, MA), the National Gallery, (London), Salon de la Marine (Paris) and in museums in Australia. Draper also taught at the Art Students League of New York, and received a lifetime achievement award from the Portrait Society of America in 1999.

Provenance: The William F. Draper Collection, New York City, USA, acquired via descent from the late William Franklin Draper (1912-2003), an accomplished American artist whose career spanned seven decades. Known as the "Dean of American Portraiture," William Draper was the only artist to paint President John F. Kennedy from life, and his oeuvre.

PLEASE NOTE: Due to recent increases of shipments being seized by Australian & German customs (even for items with pre-UNESCO provenance), we will no longer ship most antiquities and ancient Chinese art to Australia & Germany. For categories of items that are acceptable to ship to Australia or Germany, please contact us directly or work with your local customs brokerage firm.

Display stands not described as included/custom in the item description are for photography purposes only and will not be included with the item upon shipping.

Signed by the artist on the lower right. Scratch at the lower right corner (over the pig and extending above and below it) was touched up with pigment. Otherwise, painting is very good overall. A few minor scuffs/abrasions to the frame with minor losses to the finish. Draper Estate stamp on the verso. Wired for suspension and ready to display. 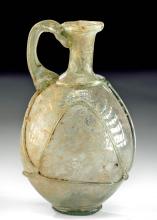 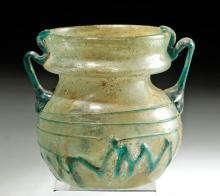