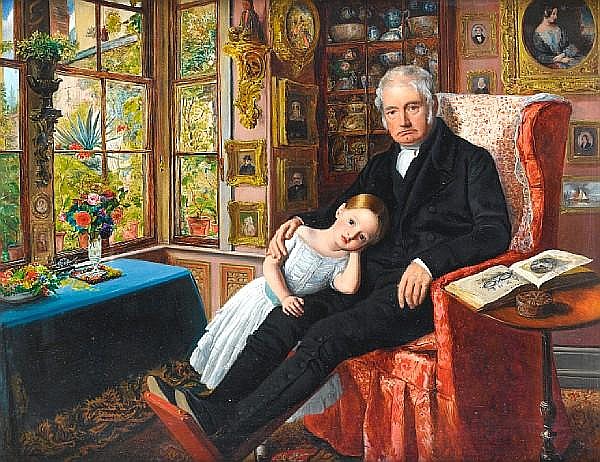 James Wyatt and his Granddaughter Mary Wyatt
inscribed on reverse 'alderman James Wyatt of Oxford and Granddaughter Mary - copy of Sir J E Millais' picture by Wm Millais finishing touches by Sir JEM'
oil on panel
36 x 47cm (14 3/16 x 18 1/2in).
to be sold with a framed letter from John Everett Millais, a silver-lined, carved oak box with inscription, and a cheque made out to John Everett Millais from Ralph Thomas (4)

PROVENANCE:
Commissioned from the artist by James Wyatt Jnr;
Gifted to his brother George Wyatt;
Thence by descent to the present owner

LITERATURE:
The cheque which will be sold with the present lot is listed and illustrated in John Guille Millais's, The Life and Letters of Sir John Everett Millais, (Methuen, 1899), vol I, p. 35


A representative and highly accomplished work from the Pre-Raphaelite circle in its radically innovative first years, this is William Henry Millais's copy – with variations – of a portrait by his celebrated brother, Sir John Everett Millais, founder member of the Pre-Raphaelite Brotherhood. The original is currently on loan to Tate Britain from The Lord Lloyd Webber.

James Wyatt (1774-1853) was a carver and gilder who had built a successful business as a framemaker, printseller and art dealer at 115 High Street, Oxford. The premises were both his shop and his home. He was curator of the Duke of Marlborough's picture collection at Blenheim. Well known in Oxford as an active citizen and authority on local history, he became an Alderman in 1841 and served as Mayor in 1842-3. By the time of the present portrait he was a widower in his mid seventies. His son, also named James, had joined him in the business. James Wyatt junior and his family – his wife, Eliza, and two daughters -- also lived at 115 High Street, and one of the daughters, the three or four year-old Mary Wyatt, is the girl shown here at her grandfather's side.

The Wyatts were friends and patrons of the young John Everett Millais, who came to Oxford as their guest on several occasions between 1846 and 1850, and once decorated the windows of the room in which he was staying to resemble stained glass. James Wyatt seems to have been sympathetic towards the Pre-Raphaelite cause and took an avuncular interest in the artist and his career. He bought his painting Cymon and Iphigenia (Lady Lever Art Gallery), and by the time of his death in 1853 also owned several of his oil sketches and a large number of drawings. It was probably Wyatt who introduced John Everett to the most important of his Oxford patrons, Thomas Combe, Superintendent of the Clarendon Press.

John Everett painted the original portrait of James and Mary Wyatt in Oxford in September-October 1849. He was in and around Oxford again the following year, spending much of the summer there working on the background to his painting The Woodman's Daughter (Guildhall Art Gallery). He initially stayed with the Wyatts, and it may have been during this visit that he painted a companion portrait of Eliza Wyatt, wife of James Wyatt junior, with their younger daughter, Sarah (Tate). Probably around the same time, and no doubt on John Everett's recommendation, James Wyatt junior commissioned William Henry Millais to make the present copy.

Though a year older than John Everett, William was far behind his brother in his artistic career and at this stage happy to act more or less as his assistant and student. Both were still living with their parents at 83 Gower Street in London. He seems to have decided seriously to pursue art as late as 1849, beginning by painting still lifes. Judging by the high technical quality of the present work, painted only a year later, he must have had great natural talent; certainly he made remarkably rapid progress. His brother encouraged him to try landscape painting outdoors in true Pre-Raphaelite fashion, and while John Everett was in Oxford in the summer of 1850, William was working on landscapes in Jersey, the ancestral homeland of the Millais family. He soon developed into a skillful and sensitive landscapist, producing a few oil paintings but from about 1853 working largely or entirely in water-colour.

John Everett showed the original portrait of James and Mary Wyatt at the Royal Academy exhibition of 1850, and presumably the Millais brothers kept the work at Gower Street after the close of the exhibition so that William could work there on the copy. John Everett, busy painting the figures in The Woodman's Daughter, made just some finishing touches to the faces. In the letter that is sold with the painting, dated December 12th, 1850, he wrote to James Wyatt junior:

William has completed the copy of your Father and I think it cannot help giving you perfect satisfaction. I have looked over him and just touched the faces a little. You of course will see a difference in the execution, but I think a very few artists could do it so well. My brother says he prefers leaving the remuneration part to your generosity. Your brother George I think would like it above all presents in the world. I am going away at the painting [The Woodman's Daughter] like bricks. I shall require a frame made to order (that is a composition). You will see when you come to town.

The letter implies that the copy was to be a gift from James Wyatt junior to his brother George. In 1899 John Everett's son and biographer John Guille Millais recorded that it belonged to James Standen, husband of Mary Wyatt, and since then it has passed to successive members of the Wyatt family.

Typically Pre-Raphaelite in its scrupulous attention to fact and detail, the portrait is set in the first-floor back room of the Wyatts' home, overlooking the garden. In a sense, it embraces not just two but four generations of the family. The man in a top hat in the small water-colour to the right of the window is James Wyatt's father, Thomas Wyatt, an Oxford baker, in a portrait by William Waite of Abingdon; and the woman in the circular oil painting in the upper right corner is Eliza Wyatt, wife of James Wyatt junior, painted by William Boxall (both portraits remain in the family). The other pictures, ceramics and objets d'art serve to emphasize Wyatt's activities as both dealer and collector. The book at his side is open at an engraved portrait of a lady; the text on the opposite page is hardly legible, but may be John Dryden's poem 'To the Memory of Mrs Anne Killigrew'.

William Henry Millais painted his copy on a panel the same size as that of the original and faithfully reproduced almost every detail. The most significant variations from the original are the removal of two pictures from the walls behind the sitters and the addition of nine different ones, eight of them small portraits and one a seascape. Perhaps the portraits represent further relatives of the sitters and were included, like the portraits of Wyatt's father and daughter-in-law, to give the work added family meaning. No doubt to make one of the new portraits more fully visible, William also removed the piece of lace cover that appears behind and to the right of Wyatt's chair in the original.

The box on the table in the portrait, its lid decorated with a design of oak leaves and acorns, has also passed down in the Wyatt family and is sold with the painting. The silver base is engraved as follows:

THIS BOX/ is part of the Celebrated large Oak/ mentioned by the Founder/ and Carved at the same time/ as the large Chair at/ MAGDALEN COLLEGE/ in the Year 1792 by/ James Wyatt.

After the Founder's Oak at Magdalen College collapsed, the college commissioned the Oxford carver and gilder Robert Archer to carve an elaborate chair for its President from some of the timber; now known as the Chancellor's Chair, this still survives in the President's Lodgings at Magdalen. Wyatt was a teenage apprentice to Archer at the time, and may have assisted him in the carving of the chair. Presumably Archer gave him some wood from the oak to carve the box as an exercise.

We are grateful to Mr. Malcolm Warner for his assistance in cataloguing this lot.