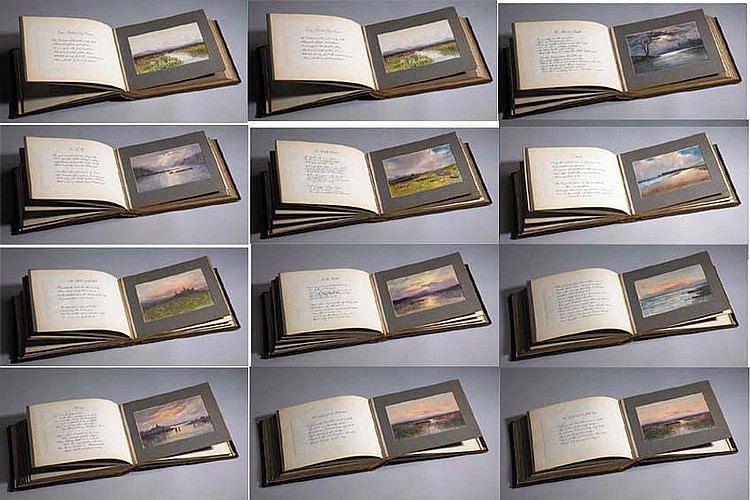 William Percy French (1854-1920) IRISH SKETCHES one work signed 13 watercolours mounted in an album with handwritten verses 13 by 18cm., 5 by 7in. This rare album of watercolours brings together Percy French's skills as both a talented poet and landscape artist. It contains thirteen original watercolours, each mounted opposite one of his short verses, carefully hand-printed by a professional calligrapher. The entire album is bound in the original dark green morocco with raised bands at spine, and with a pattern of gilt shamrocks stamped on both boards and at spine. Oblong quarto; it measures 8.25 by 10in., with each watercolour measuring approximately 5 by 7in. Watercolours mounted in grey card, backed with linen, and stitched in. With several newspaper clippings laid in, including 'Percy French's Cavan and Roscommon' (Irish Times, 17 May 1977), and a manuscript account of French's career. Individual titles of the poems (in the order they appear) are: Here and Hereafter, From London Day Dream, The Fairies Lough, To E.R, The Kindly Welcome, L'Envoi, The Rock of Cashel, In the Studio, Derry, The End of the Holidays, An Irish Mother and two untitled poems. The original owner, Joseph Kelly Vodrey (1905-75), was a bibliophile and active member of the Arthur Machen Society. His collection of Machen first editions and papers was donated to Princeton University, whilst in 1989 his widow donated an original Sybil Connolly cocktail dress to Kent State University, Ohio. Other works from Kelly's eclectic collection include a complete set of Robert Gibbings woodblocks, used to illustrate The Voyage of the Bounty's Launch (Golden Cockerell Press, 1934), which sold at auction in 2005. Interestingly, another example of one of these handsomely bound presentation albums appeared on the market with Christie's (London, 19 May 2000, lot 8), where it fetched a record price of £50,000. The Christie's album also contained thirteen watercolours and included five of the same poems as used in the present album. Provenance: Acquired from the artist's family by Joseph Kelly Vodrey; Thence by descent

For Sale from Whyte's 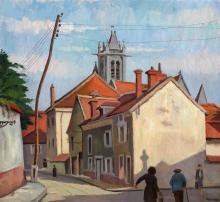 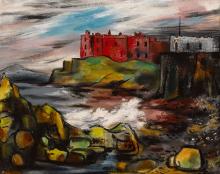 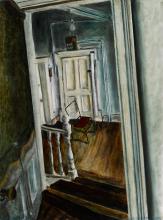 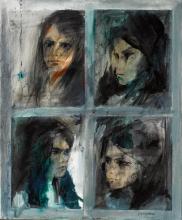 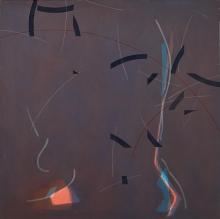