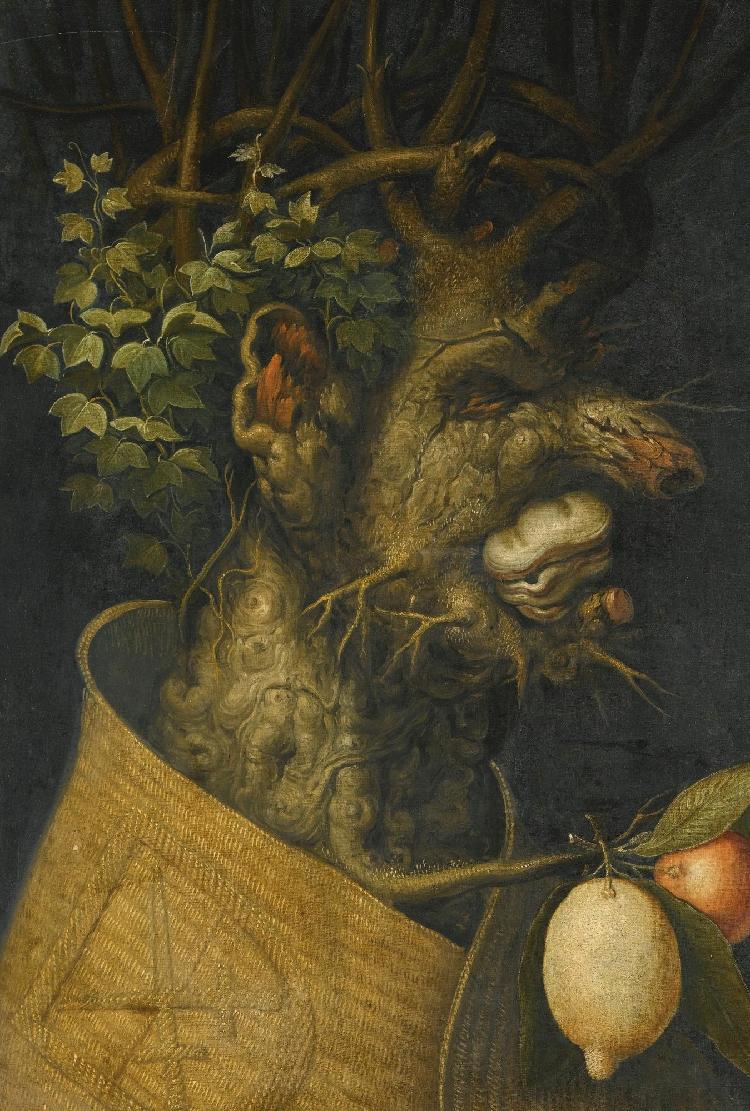 Probably Elizabeth of Bohemia, the Winter Queen (1598-1622), daughter of James I and consort of the Elector Palatine Frederick V, who may have taken the pictures with her when she fled Prague in 1620, subsequently returning to England on the accession of her nephew Charles II; Presumably donated by Elizabeth to William, Lord Craven (1608-1697); By descent and inheritance to Cornelia, Countess of Craven (née Martin), wife of the 4th Earl Craven, Hamstead Marshall; By descent until anonymously sold, ('The Property of a Gentleman'), London, Sotheby's, 27 November 1963, lot 87, where purchased by Reeve for £10,500 (as Giuseppe Arcimboldo); The Hon. Colin Tennant (1926-2010), later 3rd Baron Glenconner; By whom sold, London, Sotheby's, 11 July 1973, lot 42, for £30,000, where acquired by the present owner (as Giuseppe Arcimboldo).

Milanese by birth, Giuseppe Arcimboldo found huge fame and success at the courts of Vienna and Prague for his unusual anthropomorphic designs such as the present set of four Seasons. Celebrated for their wit and artifice, the composite heads were much imitated in the artist’s lifetime and his idiosyncratic style arguably makes him the most modern sixteenth-century painter, whose work continued to resonate with artists well into the twentieth century, particularly with the Surrealists and Salvador Dalí. There are several versions of the sets of seasons which are considered autograph. The first set, which is on a panel support and of which only Summer and Winter remain, is dated 1563 and is today in the Kunsthistorisches Museum in Vienna.1 The shoulder of Winter is emblazoned with the letter 'M' in honour of the emperor Maximilan II, for whom they were painted. A second set, dated 1573, is in the Musée du Louvre in Paris and it is from this second set that the present workshop versions derive.2 In the 2007-08 monographic exhibition dedicated to the artist in Paris and in Vienna they were discussed in some detail under the catalogue entry for the Paris set, and their quality praised. A second workshop set with the arms of Saxony is listed as formerly in the collection of the dukes of Schleswig-Holstein in Gottorg, Germany, though this is untraced, so the present works would appear to be the only complete set.3 Apart from the date of execution which differs by one decade, there are differences in some of the details between the Vienna and Paris sets, the most noticeable change being that the ‘M’ on the shoulder of Winter has been replaced by the crossed swords of Meissen, the Saxon coat-of-arms. Maximilian commissioned Arcimboldo to produce the Paris set to thank Augustus, Elector of Saxony, for his political support, and the artist is recorded as having received payment for the set from Maximilian in 1574. The Protestant Augustus had spent time at the Catholic court of Maximilian to ensure his position as elector despite the political manoeuvring of his cousin, Johan Wilhelm of Saxony-Weimar. When Maximilian gave Augustus his backing, the latter returned the political favour by electing Rudolf II, Maximilian's son, as heir to the throne. While the compositions can be enjoyed for their artistic merit alone, they should also be read as flattering political allegories representing Maximilian’s harmonious rule over all the Seasons, and by extension over all his people. The inclusion of the Saxon arms on Winter thereby transfers the political reference from the Habsburgs to the house of Wettin; the allegories make explicit that under the peaceful and successful management of these rulers, such disparate elements and competing forces can be brought together to form a coherent whole. The pictures are thought to have been brought over to England by Elizabeth of Bohemia, also known as the Winter Queen, who would presumably have acquired them while she was living in Prague. Elizabeth is thought to have given the paintings to her political ally and loyal supporter William Craven, in whose family the pictures remained until their sale in these Rooms in 1963 (see Provenance). Craven is thought to have commissioned the building of Ashdown House in Berkshire so that Elizabeth might leave the pestilential air of London but she died before the house was complete. The contents of the house were sold in these Rooms, 29 October 2010. 1. See Die Gemäldegalerie des Kunsthistorischen Museums in Wien, p. 24, reproduced plate 109. 2. See S. Ferino-Pagden, Arcimboldo, exhibition catalogue, Milan 2007, pp. 134-40, cat. nos. IV.8-11, all reproduced in colour. The floral border which frames each of the Louvre pictures was added later. 3. Idem, p. 134, under cat. no. IV.8. A compositionally different workshop set is in Trasnitz Castle in Landshut, on deposit from the Bayerishe Staatsgemäldesammlungen in Munich, but the set cannot be considered complete since only three are displayed due to the parlous condition of Autumn (see Ferino-Pagden, op. cit., pp. 140-44, cat. nos. IV. 12-14, reproduced in colour).