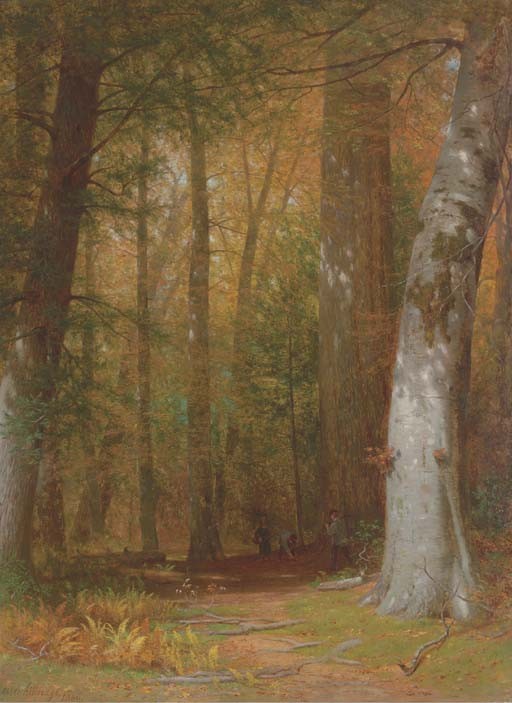 The Chrysler Museum, Norfolk, Virginia.
Hirschl & Adler Galleries, Inc., New York.
Acquired by the present owner from the above.

Worthington Whittredge's refined and exquisite renditions of nineteenth-century American landscapes are exceptionally articulate visions of nature. These compositions, complemented by the artist's masterful use of light to convey emotion and romanticism, are among the best conceived of the nineteenth century. The present painting, The Pine Cone Gatherers of 1866, is one of the finest examples of the artist's preoccupation with light, atmosphere and assiduous attention to detail. "His paintings of the primitive woods of the Catskills, the vast, seemingly endless stretches of the western plains and the coast of Newport are among the finest productions of any of the Hudson River School." (C.A. Cibulka, Quiet Places: The American Landscape of Worthington Whittredge, exhibition catalogue, Washington, D.C., 1982, p. 13)

Upon Whittredge's return to New York City in August 1859 after studying in Europe, he took a space at the Tenth Street Studio building along with artists Frederic Church, John Casilear and Jervis McEntee. Whittredge formed a close relationship with these artists as well as with Asher B. Durand and Sanford Robinson Gifford who were the two greatest influences on him and became lifelong friends. Whittredge preferred quiet scenes such as the forest in The Pine Cone Gatherers to the majestic vistas of his contemporaries. He wrote in his autobiography, "There is no denying the fact that the early landscape painters of America were too strongly affected by the prevailing idea that we had the greatest country in the world for scenery. Everybody talked of our wonderful mountains, rivers, lakes and forests, and the artists thought the only way to get along was to paint scenery. This led to much wandering of our artists. Simplicity was not in demand. It must be some display on a big canvas to suit the taste of the times. Great railroads were opened through the most magnificent scenery the world ever saw, and the brush of the landscape painter was needed immediately. Bierstadt and Church answered the need. For more homely scenery, this need was answered by a group of artists known as the Hudson River School--all of whom I knew and one of whom I was." (Quiet Places: The American Landscape of Worthington Whittredge, p. 21)

Whittredge painted with many of the Tenth Street Studio artists along the New England coast, Lake George and along the Hudson River. His favorite place to paint, however, was the Catskills. Whittredge wrote, "Short distances in our Catskill country often bring us to changed landscapes which display peculiar characteristics not always easy to engraft upon the scenery of another neighborhood..." Now roaming the dense forests of the Catskills, Whittredge had the dilemma of being accustomed to the cultivated landscape of Europe. "I hid myself for months in the recesses of the Catskills. But how different was the scene before me from anything I had been looking at for many years! The forest was a mass of decaying logs and tangled brush wood, no peasants to pick up every vestige of fallen sticks to burn in their miserable huts, no well-ordered forests, nothing but the primitive woods with their solemn silence reigning everywhere." (as quoted in E. H. Dwight, Worthington Whittredge, exhibition catalogue, Utica, New York, 1969, pp. 14-15)

The Pine Cone Gatherers depicts two boys and a girl wandering through a dense forest searching for pine cones. Whittredge paints these figures dwarfed by the large, majestic trees, conveying the magnificence and power of nature. The artist's attention to detail can be seen in every element of the forest; the cracks and crevices of the bark, the lichen that cover the trees and every branch and leaf. In this quiet woodland interior, Whittredge is able to make the viewer "aware of his own depth of feeling in the presence of nature and reveals its inherent lyricism, what art historian Lisa F. Andrus has termed the 'inevitable, self-evident, and ever-present' poetry of nature." (Quiet Places: The American Landscape of Worthington Whittredge, p. 20) Adding to the monumentality of this painting is its strong vertical composition.

Gathering Twigs (circa 1866, Private collection) by Whittredge depicts the same scene and probably served as a study for the much larger The Pine Cone Gatherers. Here, men are placed in the same spot as the children, also enveloped in the shade, with a setter in the lower left by the ferns. Gathering Twigs, however, lacks the attention to detail and dramatic light and atmosphere of The Pine Cone Gatherers. "The subjects are reminiscent of the peasant themes of the Barbizon artists, i.e., Jean-Baptiste Corot's Laurel Gatherers (circa 1845-50, Museum of Fine Arts, Boston) and Gustave Courbet's crayon drawing, Faggot Gatherers at Forest's Edge (Louvre, Paris). In his experimentation with forest interiors, it is likely that Whittredge recalled the Barbizon artists, whose work he viewed in Paris in 1849." (Quiet Places: The American Landscape of Worthington Whittredge, p. 20)

The palette and light in The Pine Cone Gatherers imbues the scene with a poetic beauty. The warm autumnal coloring of the blazing yellows, reds and oranges contrast with the dark shading of the trees. Whittredge's skilled rendering of outdoor light and atmosphere is expertly executed as patterns of dappled light weave through the branches onto the trees and forest floor accentuating the various colors and textures.

Most recent historians have acknowledged Whittredge's brilliant light as the central aspect of his oeuvre, and the one that unifies his work with the other artists of his time. John Baur wrote about the American Luminists such as Whittredge and Gifford, "Technically, [the Luminists] were extreme realists, relying on infinitely subtle variations of tone and color to capture magical effects. Spiritually they were the lyrical poets of the American countryside and the most sensitive and feeling and in the profound identification of the artist with what he portrayed. [The luminists], living at a time when pantheism was a genuine force, found in nature a presence and a spirit. Like Emerson, they became before her 'a transparent eyeball,' losing themselves completely in her moods. Their art is rapt, lyrical, filled with a sense of awe." (as quoted in A.F. Janson, Worthington Whittredge, New York, 1989, p. 96) By the time The Pine Cone Gatherers was painted, Luminism had become integral with the style of the Hudson River School artists. With Whittredge's use of light pouring through the canopy of the trees to the children below, he suggests a transcendental notion of the passage from God to Nature to Man.

Whittredge weaves together Durand's romantic naturalism, Gifford's glowing palette and the poetry of William Cullen Bryant in The Pine Cone Gatherers to convey the wonder of nature's beauty in autumn.