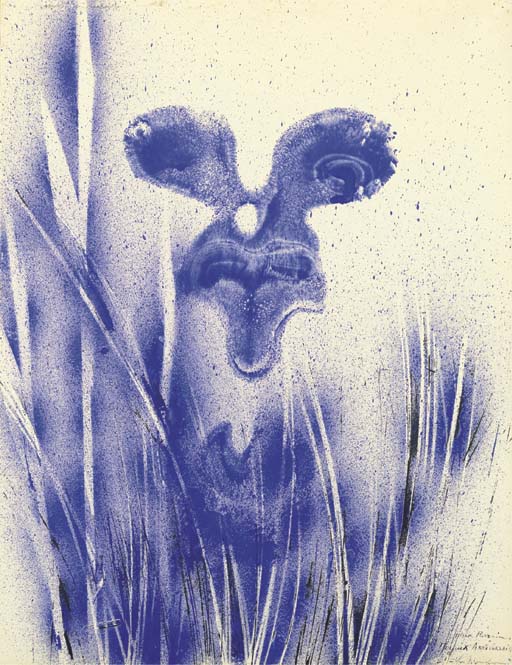 In 1960, Yves Klein stumbled across an exciting alternative to the brush or roller of traditional paintings of the human body. Even when he had been painting his monochromes, he had ensured that there was a constant array of nude models wandering around his studio in order to cultivate a sensual atmosphere conducive to artistic creation, but now the model became the brush. Smeared with paint, these women became Klein's medium-subjects, embodying life and rhythm and creation all in one. In Cosmogonie, executed in May that year, Klein has already developed his specific preference for the presentation of the torso, rather than the entire body:
'it was the block of the body itself, that is to say the trunk and part of the thighs, that fascinated me. The hands, the arms, the head, the legs were of no importance. Only the body is alive, all-powerful, and nonthinking. The head, the arms, the hands are only intellectual articulations around the bulk of flesh that is the body!
'The heart beats without thought on our part; the mind cannot stop it. Digestion works without our intervention, be it emotional or intellectual. We breathe without reflection.
'True, the whole body is made of flesh, but the essential mass is the trunk and the thighs. It is there that we find the real universe, hidden by the universe of our limited perception' (Klein, quoted in S. Stich, Yves Klein, Ostfildern, 1994, p. 175).
The intense vitality that Klein discovered in these life paintings impressed the artist deeply. The potential that he had unlocked by escaping from the traditional brush led to new discoveries, including the Cosmogonies. In these works, elements from the real world replace women as the means of their own representation, paint being distributed either through their use, or around them, forming silhouettes in reserve. In Cosmogonie, we see reeds forming a landscape below the torso of a woman, while in other works Klein captured such elements of our world as the wind and the rain. This manages to capture life, and the passing of the world, in pictorial form: we trace the existence of woman and reed alike in the shapes and voids of Cosmogonie. Indeed, this painting marks an intriguing and rare combination of both elements, the distinct and life-filled trace of the body and the reed-filled landscape, the latter appearing reminiscent of Japanese art. This is no coincidence: Klein appears to be paying homage to Japan, and its culture of Judo, mysticism and painting, which had hugely influenced him during his time there in the mid-1950s. In Cosmogonie, Klein has combined these elements to conjure a striking apparition that charts the movements both of humanity, and of the universe itself.