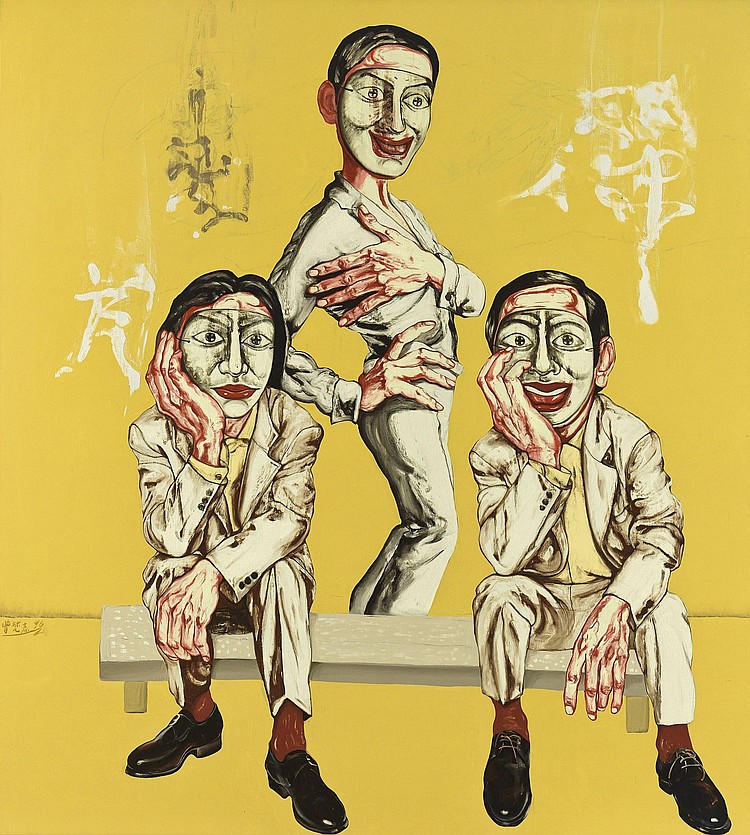 Acquired directly from the artist by the present owner circa 1997

Property from a Private European Collection of Chinese Contemporary Art

As China emerged from the chaos of the Cultural Revolution, the intellectual and artistic conformity of the communist system, the country witnessed a profound and seismic transformation of its cultural scene. The following decades heralded a new era of creativity that penetrated every aspect of the art world. Relieved of the burden of the propaganda and cultural production system, young art academy students across the nation were suddenly exposed to an extraordinary range of tools, techniques, and philosophies that they would digest and incorporate into their own visions and inspirations. This transformation of the cultural field would manifest itself for years to come, opening up traditional fields of art-making to new subjects, visions, and an almost unprecedented privileging of the artist's subjective interpretations over all else.

Throughout the 1980s and 1990s, Chinese artists broke with their academic training and began experimenting with new styles and approaches to making art, seeking to overturn inherited aesthetic paradigms for ones that better-suited a post-Mao, rapidly modernizing nation. These artists were inspired by a new influx of information and materials about contemporary Western art practices, but also by their own subjective experience of China's 20th century. The confluence of these circumstances the rigour of the training received in art academies, the turmoil and upheavals of the first Cultural Revolution and, later, the breakneck pace of modernization, globalization, and economic growth - laid the groundwork for one of the most extraordinary breaks with art history in recent memory.

While prescient curators and gallerists, like Li Xianting, Gao Minglu, and Johnson Chang, were early champions of this art, it was not always immediately appreciated or understood within China. Instead, foreign diplomats, journalists and intrepid collectors were often among the first to intuit that something much larger was at stake, that these unusual, experimental works - at turns understated, fearless, humorous, and thoroughly unprecedented - represented not only a complete re-definition of Chinese contemporary culture, but new terrain in contemporary art itself, suggesting alternative approaches to representation, subjectivity, and aesthetics.

The multi-figural 1996 Mask Series painting featured here (Lot 1025) comes from just such a collection. It is being offered on behalf of a Private European Collection of Chinese Contemporary Art, along with two exceptional Fang Lijun (Lots 1221 and 1222) paintings and one Yin Jun canvas (Lot 1301), which will be offered in the Day Sale. The owner first encountered Chinese art - and Fang Lijun in particular - as it circulated sporadically through European galleries and museums in the early and mid-1990s. The owner was struck by the ingenuity and singular vision of these works - their bold and unusual compositions, oblique humour, mysterious and elusive private symbols. Exhausted by the predictability of the Western art world, these works were a breath of fresh air, extraordinary in the fundamental ways in which they simply did not look like anything else. Inspired by these discoveries, the owner soon began travelling to China, a loyal supporter of Beijing's artists in all their activities. These initial exchanges led to a passion for Chinese art and, after three decades of collecting, a collection noted for its almost intuitive appreciation for the inventiveness and eccentricities that would be cornerstones and turning points in the Chinese avant-garde world.

This spectacular Zeng Fanzhi Mask painting is one of the great highlights of the collection, acquired directly from the artist not long after its completion and has been held privately since the late 1990s. As the pace of modernization took hold in China's major cities, Zeng Fanzhi emerged as one of the foremost interpreters of Chinese experience. Though we have to come to expect from him a barometer of Chinese interior life, this impulse is primarily a deeply personal one. He has stated, "I have something deep in my heart. It moves me and can never be wiped out. I will surely express and release it. It is in fact an uncontrollable feeling, and it is this feeling that gives birth to my paintings." This uncontrollable urge brought forth Zeng's emotionally charged, intuitive, and psychologically penetrating Mask paintings, canvases that anticipated and expressed the emotional and psychological strain that would haunt a nation re-born and on the brink of major transformations. Having grown up and trained in the more provincial city of Wuhan where he lived next to a county hospital, Zeng was already keenly attuned not only to the frailty of human flesh and his worldview as an artist was marked by his appreciation for human suffering, both corporal and psychological. But, after landing in Beijing in 1993, Zeng's attention shifted, and he became fascinated by the anxiety and pressures of social performance that came with life in a more urbane environment.

Here Zeng offers the viewer three of his prototypical gentlemen flaneurs, all dressed in the elegant white linen suits of men of wealth and leisure. Two are seated at far ends of a bench, another stands posing flamboyantly behind them. They arrange themselves as if for a candid group photograph, dressed nearly identically, each trying to achieve some desired effect on the viewer, each seeking our approval. The seated figures adopt relaxed poses, one slightly pensive, the other seemingly more outgoing, his mouth open in a welcoming laugh. At the same time, both reveal themselves to be less than at ease: their garishly painted lips and exaggerated expressions, their closed body language, enormous, vein-riddled hands revealing their fundamental unrest with themselves and each other. As contemporary life became ever more fast-paced and inundated with consumer advertising, Zeng was struck by how a more fluid society paradoxically left individuals isolated; the urge to present a seamless public persona succeeded only in driving people further and further apart. As such, the standing figure would seem to be Zeng's most approval-seeking study, his pose at once the most vulnerable and needy, but also a kind of caricature of relaxed, casual play. His legs disappear behind the bench, leaving him literally ungrounded, while his hands are bloated with self-abnegation, and the features of his mask take the shape of frozen, clownish grin.

The artist presents the figures against a muted ochre background, the unnaturally shallow space at odds with the casual display of camaraderie in the composition, adding to the feeling of stunted emotional expression coming from the figures. Indeed, the varied, candid poses suggest the composition and figuration are drawn explicitly from candid photography, highlighting the contrived nature of the poses. Their gaze fixes on a single point - that of the viewer - as they line up and face towards the imagined camera. The composition portrays a moment in time where they are aware they're being watched and recorded, and as such they advance their ideal self image. As Zeng stated, "Human beings all tend to show the best of them, such as the affected poses before a camera, the simulated posture of a complacent citified person".

The majority of Zeng's Mask paintings are highly polished, carefully calibrated compositions, more often than not featuring only individual figures or occasionally pairs. This triple portrait then is an especially unique work, not only for the number of figures but for the unusual calligraphic like strokes on the back "wall" of the compositional space. These three indecipherable Chinese words appear like graffiti within the canvas. Each 'word' seems linked to a figure, as if they have marked the space with their own surnames, a more radical expression of identity than they are otherwise capable of in their social selves. Zeng has stated that these refer to private thoughts he had at the time, too private to share or allow to be legible. We can also see the ghost of prior compositions, studies for hands, and other tentative calligraphic gestures, hidden just beneath the ochre of the background. As such, this extraordinary canvas gives us closer access to the 'uncontrollable' private feelings that give birth to his paintings. Zeng has said the most influential aspect of his professional training was in learning technique as an emotionally expressive form: "The biggest received experience was in using line, colour and form to express my response to a topic, form or emotion. I learned to utilize my emotion to produce a deep reflection upon a subject rather than making a painting that merely illustrated something." Zeng has also commented that the artists who influenced him most as a student were Max Beckman, Francis Bacon, and other modern European expressionist painters (Fig. 1 and 2). These influences have always been apparent in Zeng's work, in the expressive use of colour and red in particular in his Meat and Hospital paintings, and especially in the treatment of the flesh in his masked figures (Fig. 3). Where Bacon might use expressive colours and painterly techniques to reveal some aspect of the human condition, Zeng's techniques - in particular in the oversized hands and heavily-veined flesh of his figures - equally work in ironic contrast to the coolly composed characters, undermining their desired projection of self. The influence from the West then has led Zeng to seek greater psychological depth in his paintings, especially through the play of contrasting motifs, textures and colours. The harsh red of the raw flesh contrasts with the sensuous lines and textures of the men's clothes, which in turn contrasts with the hard-edged colour fields of the background. In many ways, however, his technique remains deeply rooted in Eastern aesthetics. This is apparent in the fine sinuous lines of his mark making, found especially in the men's clothes and features, a kind of mark making that is explicitly drawn from Chinese calligraphy and ink painting.

Through Zeng's discreet and exquisitely calibrated choices, the artist takes this seemingly outgoing threesome - posing self-consciously and awkwardly for the viewer - and reveals a poetic and bittersweet portrait of his generation, straining to keep apace with a new and unpredictable social order. He gives us the alienation of the individual figure, but additionally the multiple grouping further reinforces his message, as he shows us their self-deception and self-indulgence, their utter failure to engage with each other. Despite their apparent composure, they are helplessly isolated, their impeccable self-presentation undermined by their raw flesh and cumbersome, oversized hands. They wear inscrutable masks to hide their "true" facial expressions. Zeng inverts the traditional tropes of portraiture, with his figures' eyes and facial features giving us not a "window into the soul" but instead pure surface, rejecting our desire for access to any interior state. Indeed, Zeng's figures seem to insist that surface is all we need to know of them, and in that insistence, we find insight into their emotional and psychological plight. The deliberate awkwardness of the composition, the unsettled emotional tone, and the enigmatic revelation of Zeng's calligraphic stokes, all give us insight into the artist's emotional and aesthetic process in a way never before seen. As a result, the canvas displays not only the artist's singular vision, but the depth of Zeng's empathy and passion, giving us one of the most extraordinary examples from the height of the Mask series.