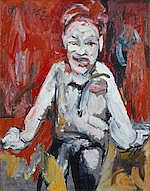 Provenance ShanghArt Gallery, Shanghai Acquired directly from the above by the present owner 1989 :89 From the late 1970s onwards, China would undergo a profound and fundamental cultural transformation. A new era of creativity would enliven every aspect of the art world. It would take decades for this transformation to become as obvious as it is now, with China now home to hundreds of galleries, world-class art fairs and museums, and the contemporary art to fill those walls. The earliest rumblings of this transformation would begin in the academies. Unburdened by the previous cultural propaganda system, young art students across the nation were suddenly exposed to an extraordinary range of tools, techniques, and philosophies that they would digest and incorporate into their own visions and inspirations. Over the years, the painter Zeng Fanzhi emerged as one of the foremost interpreters of Chinese experience. His emotionally raw, intuitive, and psychologically penetrating paintings anticipated the emotional and psychological strain that would haunt the new nation. Zeng’s concern over the alienation and loneliness inherent to modern life was captured in his iconic Mask series of the mid-1990s, but in significant ways these concerns lay at the very heart of his work from the beginning. 1970, , 1990, 51 Fig 3. Zeng Fanzhi B. 1964, Hospital Triptych No. 3, 1992. Oil on canvas (triptych), 150 x 345 cm overall. ,, 1992, © 2017 Zeng Fanzhi Fig 1. Clyfford Still (1904-1980), Untitled, 1960. Oil on canvas, 287 x 371.5 cm. Gift of Mrs. Clyfford Still, 1986 (1986.441.7). ·,,19601986 Image copyright © The Metropolitan Museum of Art. Image source: Art Resource, NY. © 2017 City & County of Denver, Courtesy Clyfford Still Museum / Artists Rights Society (ARS), New York 52 Born and raised in the provincial city of Wuhan, Zeng earned his painting degree at the Hubei Academy of Fine Arts. As a student, he found inspiration in the expressionist works of German and Dutch artists such as Willem De Kooning and Max Beckmann, both of whom relied on an expressionistic palette to imbue seemingly mundane subjects with psychological drama and existential gravitas. The present lot, Smiling Bei Ke Ning, comes from these very early days of Zeng’s discovery of his voice as an artist. Painted late in 1989, the painting features a sitter (a classmate of the artist’s, nicknamed Bei Ke Ning), casual and relaxed as if for a candid photograph, resting on the weight of his expansive arms. Everything about Zeng’s handling of the subject and the paint contradicts his apparent repose and the happy theme. The figure appears to be young, but his features are malformed and heavy, lips appear enlarged and out of shape, one eye strays while the other appears swollen. His right arm descends into a club-like fist. Zeng appears to have laid his composition down quickly in swift, delineating black strokes, filling in the figure primarily in whites, greys and blacks, some ochre and red. The strokes are thick, roaming, and agitated. The figure’s receding hairline is obscured by a scrawl of red which extends into the background, itself mostly a blaze of a furious bloody red. Zeng has always been keenly attuned to the emotional and psychological impact of his colour choices, and the dynamic arrangement of the palette suggests his study of de Kooning or the storm and symphony of colour found in the works of Clyfford Still (fig. 1). Smiling Bei Ke Ning anticipates Zeng’s important early Meat and especially his Hospital paintings. While still a student, Zeng’s humble accommodations required that he make use of the public toilet at a neighboring hospital. The experience of passing through a hospital waiting room on a daily basis, the juxtaposition of life in crisis against the backdrop of a cold and immobile bureaucratic institution, inevitably found its way into Zeng’s earliest works (fig. 2, 3). Smiling Bei Ke Ning suggests the psychological conflicts that would drive his paintings for years to come. The figure sits amid a field of emotional chaos, but attempts to strike a pose of relaxation, despite even a large spider crawling up his inner arm. In later works, the alienation of the figure would take the shape of a grinning mask. Here it is suggested by the raw, brutalized, uncontained body. He effectively becomes an early patient of one of Zeng’s hospitals , expecting solace in a wretched, violent, unstable world. The great breakthrough for artists in the post- Mao period was to represent the world not in some idealized form but in subjective, philosophical, and existential terms. With Smiling Bei Ke Ning, we see how alert Zeng was from the very beginning to the emotional life of his contemporaries as well as how skillful and adept he was with the tools to communicate them. , ··(Willem De Kooning) ·(Max Beckmann) 1989 (Clyfford Still) TWO BRILLIANT CANVASES BY HSIAO CHIN LOTS 18-19 Hsiao Chin, photographer: Christoph Kreutzenbeck ,Christoph Kreutzenbeck 56