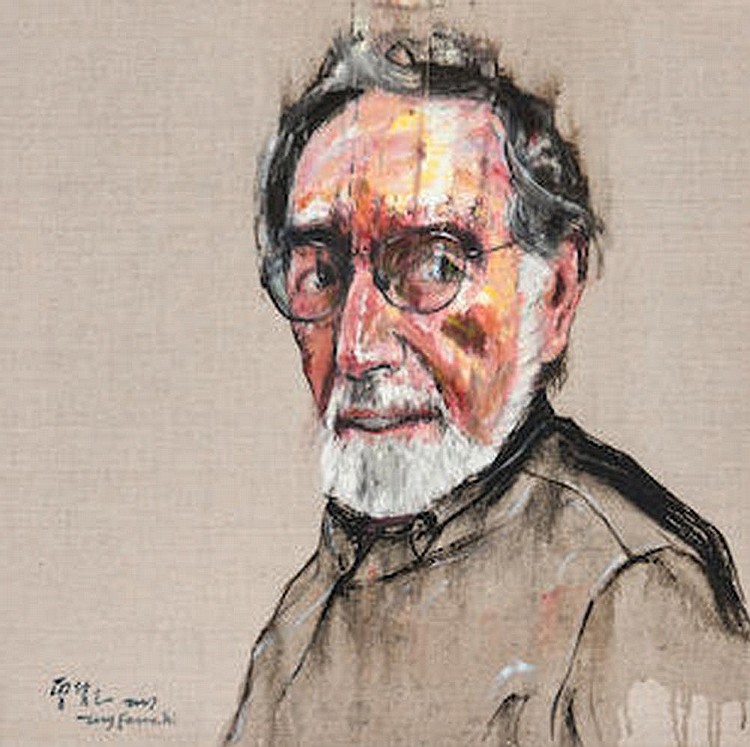 Provenance Acquired directly from the artist by the present owner in 2007 (·) 2007 : 2007 Zeng Fanzhi 2007 Emmy-winning director, award-winning photographer, and best-selling author, Lawrence Schiller is also a photojournalist for publications including Life and Time, Stern and The Sunday Times and best known as a photographer of Marilyn Monroe. In 2012, he released his book Marilyn & Me, a compilation of photographs including the images he took shortly before Monroe’s death, commemorating his experience photographing the Hollywood icon. An avid collector of Chinese contemporary art, Mr. Schiller began his collection in 2002 when he visited China for a project to document the country’s contemporary history. During his multiple trips to China, he met and befriended many artists, among them Zeng Fanzhi. Figures with large heads and exaggerated features painted in a highly expressionistic style characterize Zeng’s portraits, which draw influences from German Expressionism in its saturated colors and gestural brushstrokes, as seen in his depictions of Pablo Picasso, Lucian Freud, and Francis Bacon. Positioned on the right side of the composition against a raw background, Mr. Schiller is rendered with dynamic smeared brushstrokes. Our attention is immediately drawn to his heavily textured white beard, contrasting against bold applications of predominantly red, pink, and yellow brushstrokes on his visage. Zeng captures Mr. Schiller in pensive thought, dressed in a timeless brown leather jacket, gazing into the distance. · «»«»«»« », 2012,«Marilyn & Me», ,, ,2002 ,, , , ··· ,, , ,, 58