For centuries, artists and craftsmen have been inspired by the changing leaves as summer fades into fall. Now that we’re well into autumn, along with pumpkin spice lattes and cooler temperatures comes exquisite dècor for seasonally-inspired interiors.

Among the most anticipated auctions this month are Locati’s October 2016 Sale on October 17 and Freeman’s British & European Furniture & Decorative Arts on October 18, offering porcelain, pottery, glassware, and other objects that delightfully bring to mind the season of abundance. Our editors rounded up 8 objects that are sure to inspire an autumnal tablescape. 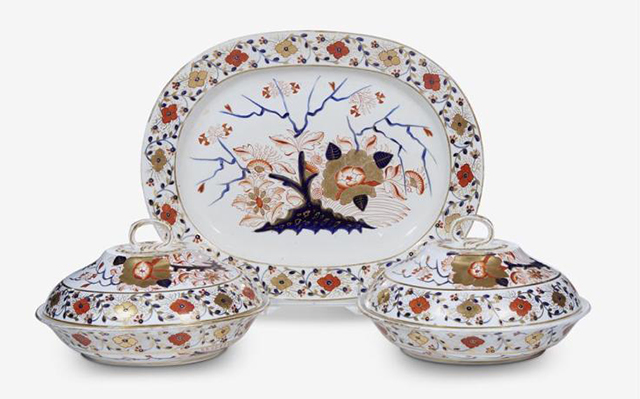 Royal Crown Derby is one of the oldest remaining English porcelain manufacturers. Their immensely popular Imari patterns were styled after Japanese porcelain to be richly colored with intricate geometric and floral designs. This partial dishware service set is decorated with gold and burnt orange flowers surrounded by vines, and the serving tray is adorned with a flowering tree. 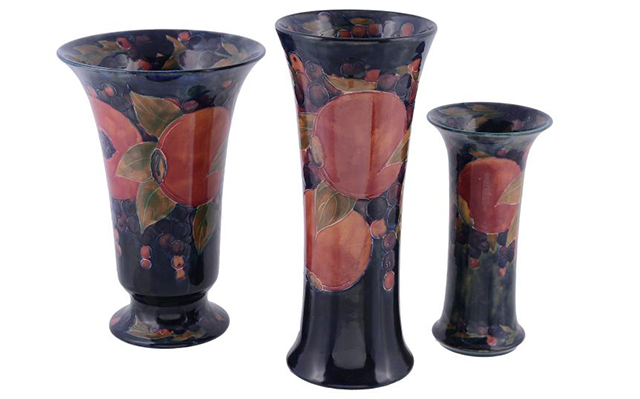 In many Middle Eastern cultures, the pomegranate symbolizes prosperity, fertility, and bounty. This trio of vases by Moorcroft is decorated with the fruit, which is harvested from September through February in the Northern Hemisphere. Moorcroft is a British pottery studio founded in 1897 that still uses their original production method of applying designs by piping outlines of liquified clay and then applying metallic oxide colors by hand. 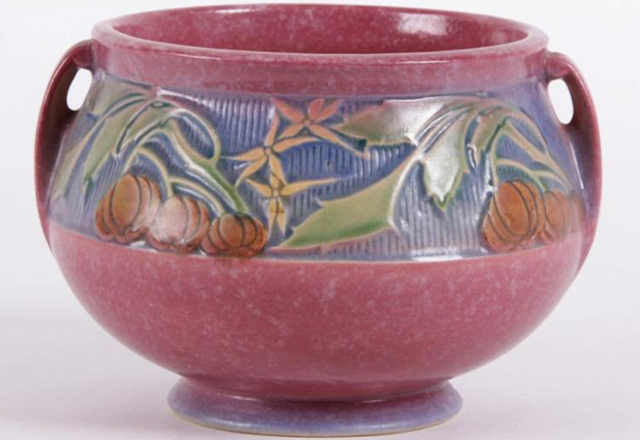 J.F. Weaver founded the Roseville Pottery Company in Roseville, Ohio in 1890 and produced designs popular with the American Arts and Crafts movement until 1953. This pink planter is finished with a raised decoration of pumpkins on the vine. 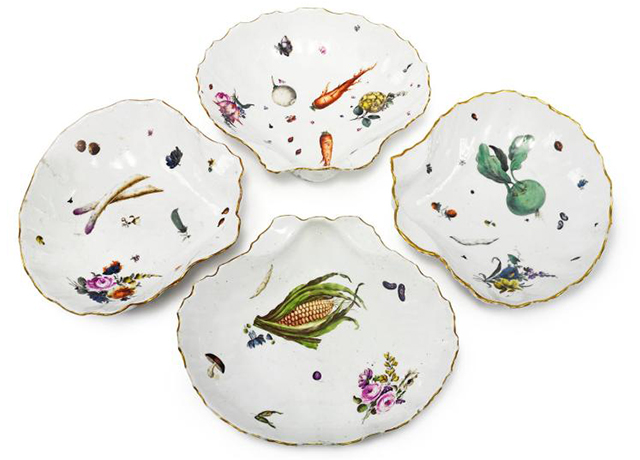 This collection of four shell-shaped dishes is painted with an arrangement of vegetables, including carrots and corn, floral bouquets, and nuts. Established by King Augustus the Strong in 1710, Meissen was Europe’s first porcelain manufactory. They are known still today for quality pieces marked with their iconic crossed swords logo. 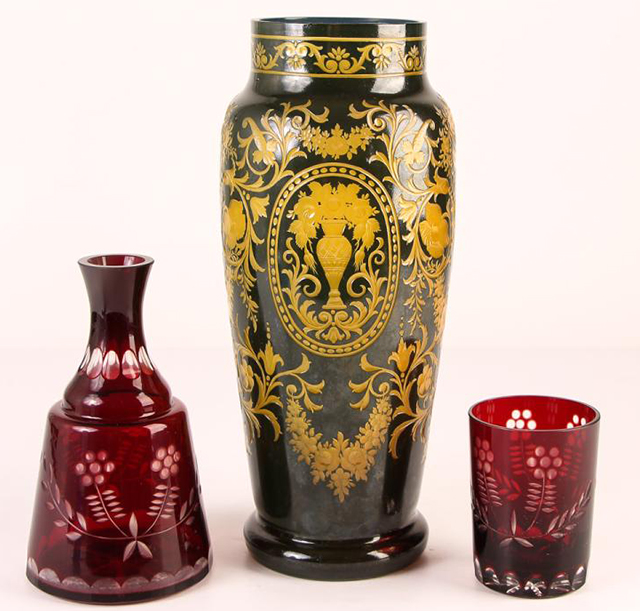 This trio of etched glass objects includes a 13-inch vase (or lamp base) decorated with a golden yellow floral pattern. Accompanying the vase are a cranberry-hued glass decanter and matching glass. The depth of color and intricacy of decoration complement the richness of the fall season. 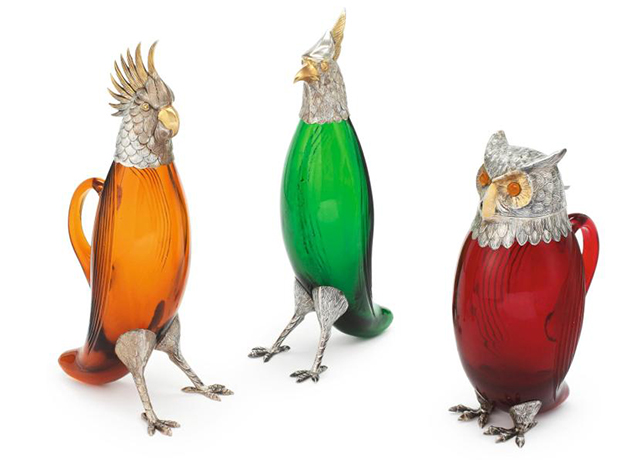 These unique vessels are shaped like birds, including an owl and a cockatoo. Each of the three decanters is made from richly-colored glass in autumnal tones: mustard, cranberry, and kelly green. The birds’ feet and heads are made from silver, and the eyes and beak are gilded. The owl decanter’s eyes, in particular, are crafted from glass. 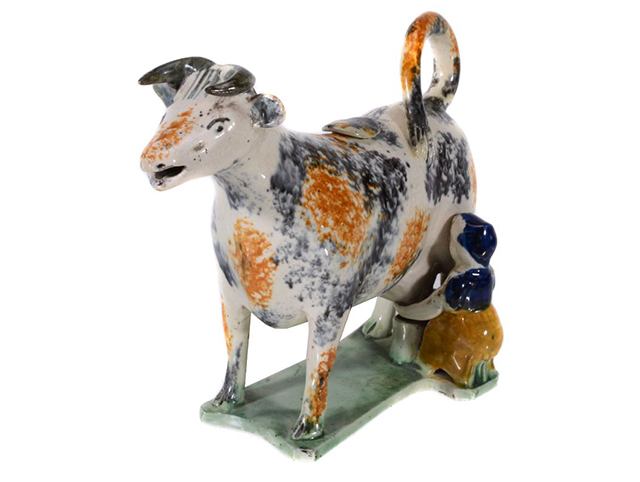 Creamware was created around 1750 by potters in Staffordshire, England and soon became the most popular earthenware for domestic use. This playful container is in the shape of a cow, accompanied by a farmhand and painted with mottled patches of navy and gold. 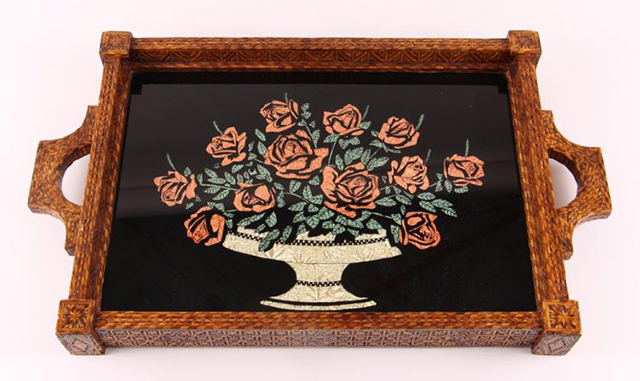 This Victorian serving tray is made from glass and finished with a wooden border. The tray is decorated with a bountiful foil bouquet of flowers, and the border is created using an inlaid veneer technique called marquetry. A Taste of the Past: Sotheby’s Decorative Arts