In 2015, a Sotheby’s sale of $2.7 billion worth of Asian art, jewelry and watches was considered a sign that the Chinese market slowing down. Buyers, according to Bloomberg, were becoming more cautious. But Chinese jewelry, in particular jadeite jewelry, is still in high demand today. This is partly due to national pride in Chinese heritage, but also because jadeite is seen as a less flashy alternative to precious gems like diamonds and emeralds, according to Mark Newstead, Head of Asian Art at Dreweatts & Bloomsbury.

The symbolic nature of antique jewelry is also still relevant today. Throughout Chinese history, gifts and practical items like clothes-fastening brooches were laden with symbolism. Some of the meanings are quite simple (for example, the use of blue references heaven, or Tian, the home of the supreme god), but many are based on the structure of the Chinese language, playing on words and sounds. For example, the character for “bat” is fu, which is a homonym for “blessing.” 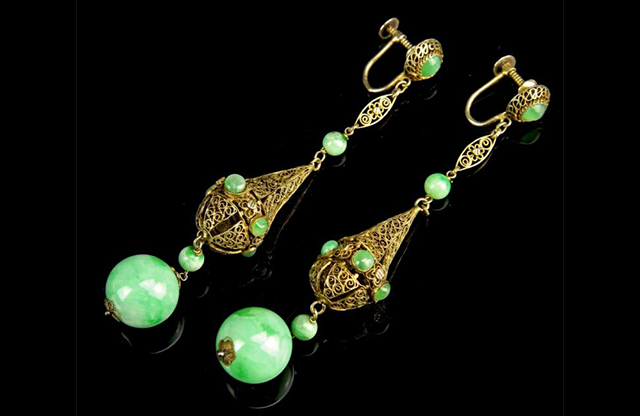 “Symbolism is certainly applicable to pendants and brooches,” explains Newstead. “Peaches, for example, denote wealth and longevity.” Other decorative elements include the pomegranate (the fruit’s many seeds signify a wish for many sons), the lotus (a homonym for either “harmony” or “continuous”), and the dragon (symbolizing power).

Jade, notes Newstead, is the material that Chinese collectors look for today. “The best pieces are sold in Hong Kong. You do get a lot of early jades coming to the market, some from the Han dynasty or earlier. In truth, the quality of stone is more important than the age, with an emerald green color and high translucency most desirable. White or mutton-fat jade [nephrite] is the next most popular.”

Nephrite, the finest of which is known as Hetian or mutton-fat jade, was once prized for its pale color and saw prices surge as supply of carved nephrite diminished. This scarcity helps to explain the rise in popularity of jadeite (the darker green jades). The stone is considered worthy in China’s anti-corruption era; perceived as less ostentatious than diamonds or emeralds. 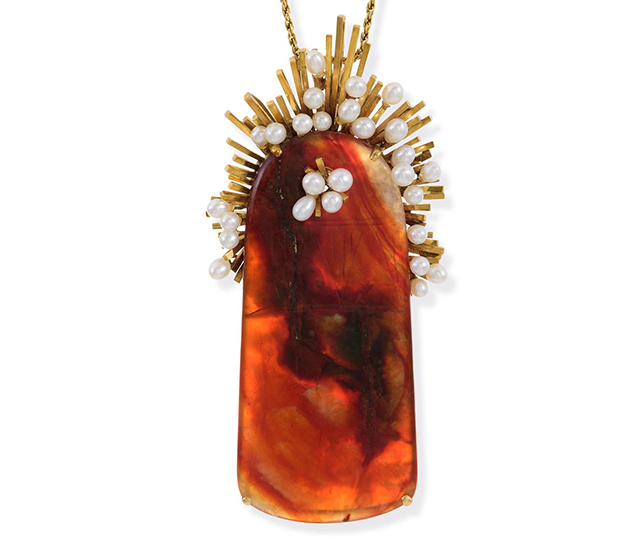 However, it is also renowned for its hardness, and symbolizes longevity.
For centuries, certain types of personal adornment and materials were reserved for the Imperial Family, thus the dynasties heavily influenced the development of Chinese jewelry. Like jade, certain materials and symbols were used in jewelry across China’s dynastic eras, while others came into fashion depending on imperial preferences. Trade and technology, of course, also affected the styles and techniques used in jewelry making.

Founded by Kublai Khan (Yuan Shizu), the grandson of Genghis Khan, this era saw the rise of a paper currency, international trade and diplomacy. The resulting advances in technology helped artisans to develop new and innovative jewelry techniques like Baodianzhuang inlay, an early form of cloisonné that placed gems in a gold casing. ‘Jewelry’ as such consisted of items reserved for the aristocracy, especially hair pins and combs. The decorative elements of dragon and phoenix were reserved for items worn by the Imperial Family, as the emperor was considered to be the Son of Heaven in Chinese culture.

Period texts show that hair ornaments were spreading to social levels immediately below the aristocracy, such as high officials. The feudal system was crumbling and early capitalism was on the rise, with an attendant merchant class based in cities. Jewelry inevitably became a symbol of wealth. However, certain colors, motifs and materials were still reserved for the Imperial Family, including gold filigree inlaid with gems. 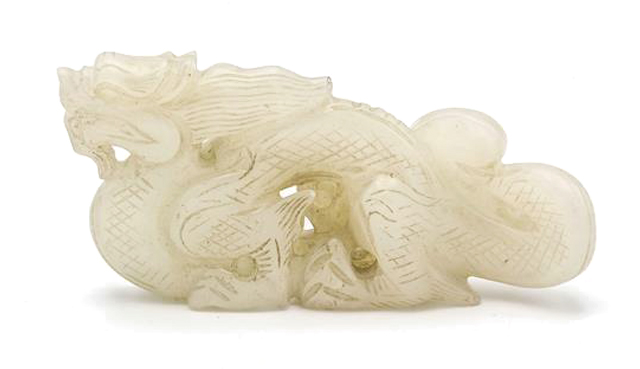 In the early 1400s, the establishment of a powerful navy made large-scale tributary trade possible with Southeast Asia and India. Jewelry materials became more varied, with kingfisher feathers, turquoise and resinous woods increasingly used. In the late Ming period, as trade with North Africa and Europe expanded, foreign techniques as well as materials were incorporated with traditional skills. Emperor Jingtai supposedly aided the development of Chinese cloisonné, which combines bronze work, porcelain and painting. Jingtai lan is the particular bright blue the emperor contributed, seen not only in jewelry but also on porcelain ware.

The Imperial Family portrayed itself as representative of all of China. Manchu (their homeland), Han (the idealized Chinese people) and new Western influences were all integrated into strict court rituals in which personal adornment played a key role.

As the Imperial Family were practicing Buddhists, jewelry took on moral connotations during this era, in addition to being an indicator of wealth. Prayer beads, used in Tibetan Buddhism, became popular at court with both sexes. These and other adornments were made with organic materials like Bodhi seeds and agarwood, both for religious significance and for their pleasant scent.

Gifts with moral symbolism were popular outside of court as well, making use of the above-mentioned visual and aural puns. Pendants and brooches illustrated with signs of good fortune, health and the protection of children were given at key events such as marriage, pregnancy, and the birth of a son. 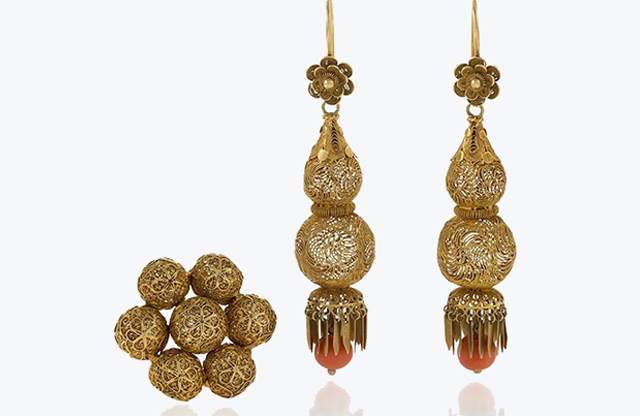 As in earlier periods, references to celestial beings and Chinese legend were common. Among the semi-precious stones, Dong pearls were particularly valued, being from the Imperial homeland and suggesting respect for the dynasty. Coral, sourced from Italy until the end of the 19th century, was reserved for the highest Imperial officials. Five thousand years ago, the god of the Yellow River was said to have offered Emperor Yu a number of treasures, of which Yu chose three, coral being one. A wide range of blue elements symbolizing heaven was used, including lapis lazuli, turquoise, jade and kingfisher feathers, which were most popular in the Daoguan reign (1821–1850).

Unlike jade, gold was also traded as currency and therefore seen as a direct indicator of wealth rather than a symbol of good fortune. Techniques that iterated on traditional Chinese artisan skills emerged, such as Beijing Enamel, a process of using enamel on silver to decorate bracelets, earrings, and pendants.

The quality and originality of form found in antique Chinese jewelry, along with its ties back to Chinese imperialism, make it a fascinating collecting category today. For those who avidly seek it out, the exchange between Eastern and Western traditions – and the use of symbolism across all types of jewelry – adds layers of interest to these rare and intricate adornments.